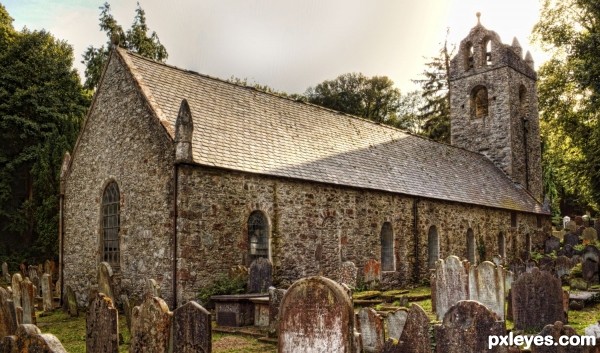 Old Kirk Braddan
The new church replaced the former parish church on a nearby site which has been used for religious purposes since the earliest times. Rebuilt in 1777, Old Kirk Braddan was never reordered in Victorian times, and contains its original box pews, gallery and a "three-decker" pulpit, with a lectern, minister's pew and pulpit above. It now houses several Celtic and Norse crosses from the period 800-1265, which were found in the parish. The church is still used occasionally for worship. It is entered in the Protected Buildings Register, and maintained by the Friends of Old Kirk Braddan. It was featured in a 35p Christmas stamp issued by the Isle of Man Post Office in 2010.

The church has two bells, in a bellcote on a small tower at the west end. The tenor (G) is inscribed "1780", and the treble (E flat) dates from about 1800. They are commemorated in a 19th-century drawing-room ballad The Bells of Old Kirk Braddan by James Sutherland and M L Wood (Manx National Song Book vol.ii p.13).

The church also has a hymn-tune named after it, KirkBraddan by E C Walker (1848-72); it is used as a setting of the Epiphany hymn From the eastern mountains by Godfrey Thring. For a score (PDF) click here; for an audio (MIDI) file click here.