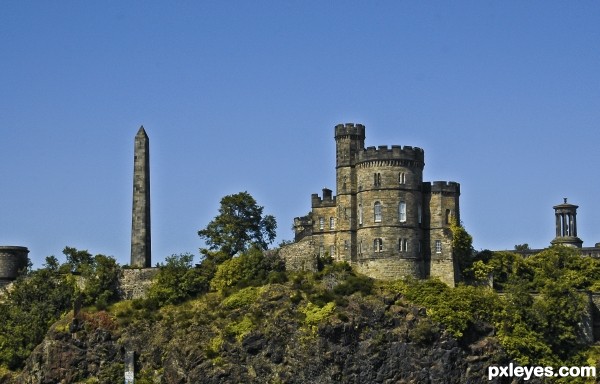 Occupying a prominent location on the edge of Calton Hill, in central Edinburgh, the Governor's House is a castellated structure situated next to Old Calton Burial Ground and behind St. Andrew's House. This is a remnant of the jail which once occupied the site of the latter, at the time the largest prison in Scotland. The Governor's House was built 1815-17 by Archibald Elliot (1761 - 1823), who extended the Bridewell Gaol, which was the work of Robert Adam (1728-92) in 1791. The buildings were all built to match James Craig's Old Observatory on Calton Hill behind.

The Governor's House lay unused for many years and is now occupied as part of the St Andrew's House office complex.
(5 years and 1210 days ago)

Wonderful picture, author. Now how about Rosslyn Chapel, or is it too far away from where you live? Kidding of-course.