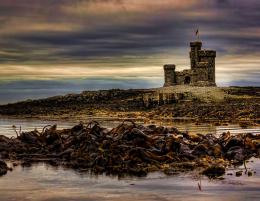 Winning entry, with a score of:
73.9%
By Heathcliffe

Each town and village has got an history, this can be represented by an old castle, a statue remembering the town founders, a plaque telling some historical facts and so on. In this contest you have to show us something about the history of the town where you live at the moment.

Besides the photo you also have to tell us what town you are showing us and tell us something about the photo, explaining why it is an important historical object in your town. Important: it has to be your current hometown and the object has to be at least 75 years old! So dive in history and find out what happened in your footsteps before you where born.


Status: finished. Check out the winners below!
Suggested by: robvdn
friiskiwi: not so long before I was born, LOL ( 5 years and 2062 days ago )
FallingHorse: There's not much left in our town that's more than 75 year old - most of it blew away in a cyclone (Tracy) in '74. I think there may be a few buildings right in the city
( 5 years and 2061 days ago )
friiskiwi: Advantage of living in a small town, most historic places are within walking distance of each other. Now I will just have to wait for it to stop raining. ( 5 years and 2060 days ago )
Celestial: This is a bit unfair

my hometown doesn't have a history like this... some countries don't have history like others... ( 5 years and 2059 days ago )
friiskiwi: Surely WA has as much history as New Zealand? Still it's a big place, where do you live? ( 5 years and 2059 days ago )
Celestial: Frankston, Vic. unfortunately our 'history' is limited, yes we have a few plaques around the place but they can't compete with the beauty of places like Europe

( 5 years and 2058 days ago )
captgeo: This contest is about your HOMETOWN.... not your state, province or a remote part of your country right? The goal states it must be your "current hometown". I already see lots of entries that I know the authors dont live in. ( 5 years and 2058 days ago )
Contest Moderator: Mods can check your latest IP, this means we can check your hometown. So it might be an idea thinking about this when you enter this contest

The Tower of Refuge - created by Heathcliffe 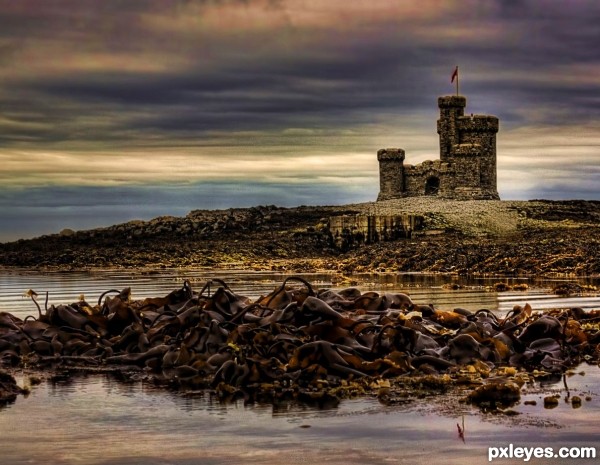 The structure was built upon the reef on the orders of Sir William Hillary (who helped to found the Royal National Lifeboat Institution) in 1832. After several shipwrecks upon the semi-submerged rock, he wanted a refuge for survivors until help could arrive. Sir William, who personally contributed a high proportion of the costs, secured a substantial number of public contributions for funding the building. The owner of the private islet was persuaded to give their permission for the refuge. After its construction, the building was stocked with provisions such as bread and fresh water for any shipwrecked persons. The tower originally housed a bell for summoning of help.
The refuge, which was built to look like a castle, was designed by local architect John Welch who was also responsible for the design of other landmark buildings in the Isle of Man
The tower derives its name from a poem by Wordsworth: COMPOSED OR SUGGESTED DURING A TOUR IN THE SUMMER OF 1833 XV ON ENTERING DOUGLAS BAY, ISLE OF MAN "Dignum laude virum Musa vetat mori."
THE feudal Keep, the bastions of Cohorn, Even when they rose to check or to repel Tides of aggressive war, oft served as well Greedy ambition, armed to treat with scorn Just limits; but yon Tower, whose smiles adorn This perilous bay, stands clear of all offence; Blest work it is of love and innocence, A Tower of refuge built for the else forlorn. Spare it, ye waves, and lift the mariner, Struggling for life, into its saving arms! Spare, too, the human helpers! Do they stir 'Mid your fierce shock like men afraid to die? No; their dread service nerves the heart it warms, And they are led by noble HILLARY. (5 years and 2056 days ago)

What a fascinating story behind the photo!
I find most fascinating, the footnote to the story.

"Coincidently since the building of the Tower of Refuge and up till the present day no ships have founded on the rocks..."

Awesome shot... so you live on Isle of Man?

Yes I live on the little Isle of Man. I'm really lucky to have such lovely scenery to photograph.

Very nice shot... the seaweed (or whatever) in the foreground adds a lot. Almost looks like a dragon could come flying through.

wonderful photo. You are why I did not enter my photo in this contest. It will be hard to beat. Well done.

Tower of Hercules - created by mqtrf 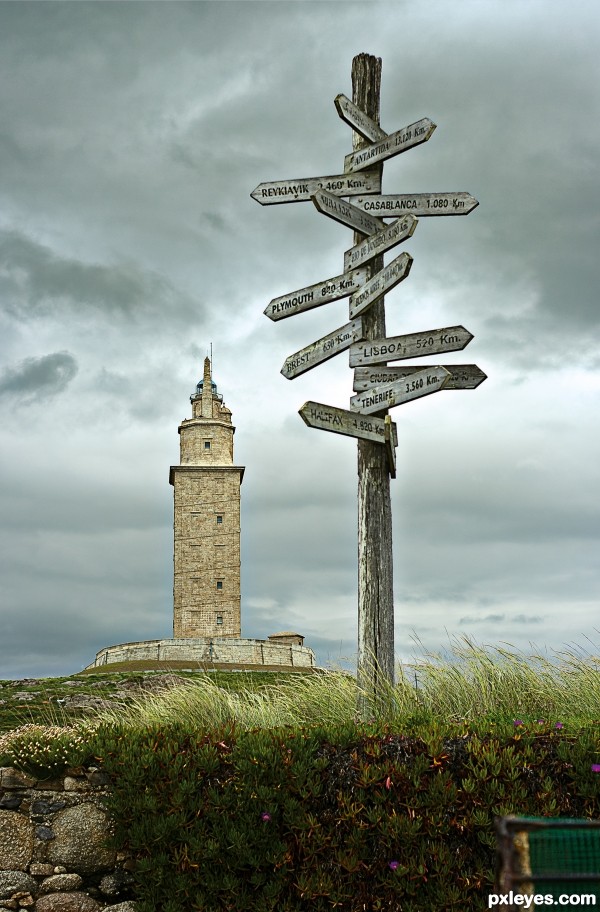 Through the millennia many mythical stories of its origin have been told. According to a myth that blends Celtic and Greco-Roman elements, the hero Hercules slew the giant tyrant Geryon after three days and three nights of continuous battle. Hercules thenâ€”in a Celtic gestureâ€” buried the head of Geryon with his weapons and ordered that a city be built on the site. The lighthouse atop a skull and crossbones representing the buried head of Herculesâ€™ slain enemy appears in the coat-of-arms of the city of Corunna.
Another legend tells that King BreogÃ¡n, the founding father of the Galician Celtic nation, constructed here a massive tower of such a grand height that his sons could see a distant green shore from its top. The glimpse of that distant green land lured them to sail north to Ireland. A colossal statue of BreogÃ¡n has been erected near the Tower.

Cool shot... like the signpost, although it may steal some of the focal point

I might have cropped it just above the 'green thing' in the bottom right corner - otherwise .. love it. 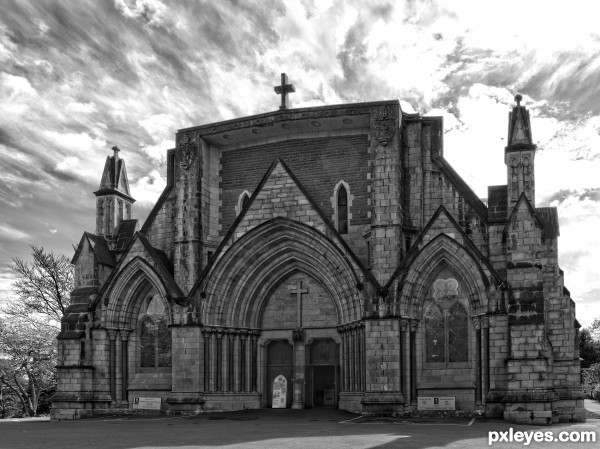 Nelson Cathedral (completed in 1930) is build of grey marble from the west side of the TÄkaka valley. Although TÄkaka marble has been used in a number of public buildings, Nelson Cathedral is the only building entirely faced with this distinctive rock.
In 1851 the first church was erected at a different site. In 1866 the church was named as Christ Church Cathedral. In 1887 a second church was constructed at the current site using much of the same materials of the previous cathedral. In 1925 the current church construction began.
The cathedral has seating for 1,200 people. It is 58 meters in length and 27 meters wide. The tower is 35 meters high.
(5 years and 2056 days ago)

Nice in B&W, few blown highlights in the clouds on the right but I like it just the same

Thanks, I realise I have blown highlights, but shooting almost straight into the sun, it couldn't be helped. 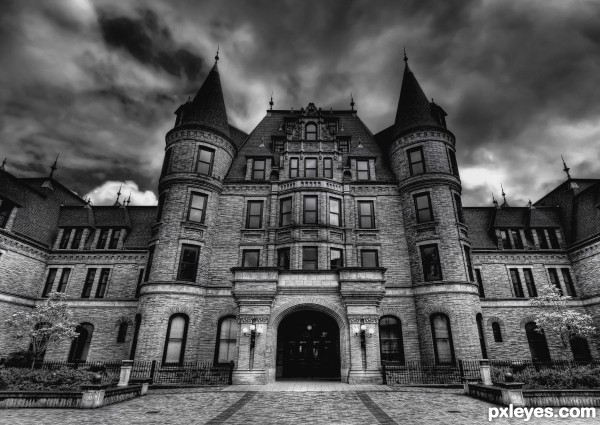 This is actually Stadium High School in Tacoma WA. It was built in 1891 as the finest hotel on the west coast, however, plans changed, and it became a high school in 1906 which it has been ever since. (5 years and 2059 days ago)

spooky, nice HDR, just wish the building wasn't leaning quite so much. 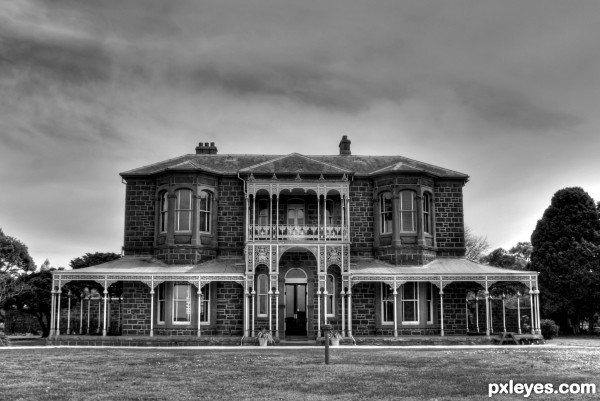 Barwon Park Mansion at Winchelsea, Vic, Australia.
This 42 room mansion was built on 29,000 acres between 1869 and 1871 for Thomas and Elizabeth Austin and was designed by architects, Davidson and Henderson. Thomas Austin is famous, or infamous for introducing rabbits to Australia.
It is known to be haunted and they often run ghost tours here. (5 years and 2056 days ago)

Is it haunted by ghost rabbits?

I'm sure his name is cursed by many for those rabbits! Nice photo, the black and white work well to give it an appropriately creepy air. Well done!

haha I can just picture ghost rabbits. No the ghost is female, if you google barwon park mansion you will see some of the pictures taken of the ghost...kinda freaked me out! lol

Looks much better in High Res