Dancing with the Stars

I've wanted to use this wonderful sculpture for a long time in a contest. Thanks for Great Nebula in Orion by mike-in-ny at flckr.com. Also to stuant63 at flckr for Star Jumpers and to brockvicky at flckr for the star source. The sculpture is by veggiegretz at morguefile.com. Thanks so much!!

Lest We Should Forget

Flowers were all created from hat as was the container for the arrangement. The background was also created with many changes to the source. Please see my SBS. Thanks to Beverly and Pack at Flickr.com for the folded flag source, and to Vic Acid at flickr.com for the Iwo Jima source photo. The fabr...

Hands That Make the Music Flow

Hands around the world of all colors, of young and old, of rich and poor, make the music flow from their many diverse instruments. Thanks to all the following at flickr.com for the hands sources: bobjgendorf (flute player), Irrgerich (Harp player), onkel_wart (accordian), armadillo (guitar player),... 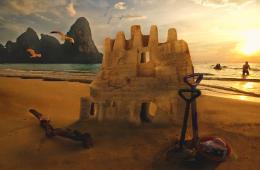 Thanks to luisrock62, clarita, and rosevita at morguefile.com for the seagull photos. Also, to the following at flickr.com: rene_ehrhardt for the sunset beach, auntiep for the bucket and shovels, GorupKa for the conch shell, and shells by Cremo, kevin124 and eldave.

Flowers, vase, and background were all created from the source image. Foreground fabric is from CGTextures.com

Thanks to the following at flickr CC for the source photos: merche (fish and water and anemona), therefromhere (fish and coral, surgeon fish and batfish) Please see my SBS for details.

When I entered 'world hunger' as my 2 words, this startling fact came up - That a child dies every 5 SECONDS from hunger somewhere in the world. Actually, in just the time it takes to breathe in and out, a child dies. I thank the following at flickr who took these photos. They are folks who really ... 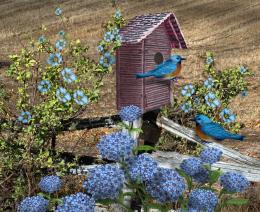 First the birdhouse was formed from logs from the old mill, then from the patch of blue sky, the flowers were created and then the bluebirds were made from the same patch of sky. Thanks to gracey at morguefile.com for the fence and bush photo. 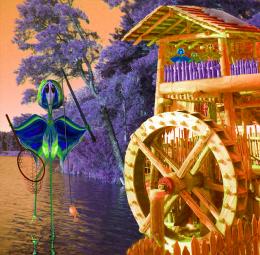 The source was used for creating the fishing bird and his family up above waiting for dinner. The background is from my own photo. The net and pole are drawn with the brush tools.

Layers of very close-up views of the hair make up the fireworks in a number of layers with various colored light filters over them. Thanks to cgtextures.com for the pagoda source and to nazka2002 at morguefile.com for the people silhouette.

Just the source was used. I found this young lady's beautiful face, her hair blowing in the breeze, was the perfect place to create 'dandelion parachutes'. The dandelion was created from her hair, by the way.

Everything was done using the source photo. Flowers and butterflies are stylized rather than realistic. Butterflies (you've got to look up close) are made from statue face. Red flowers are from top of his pants, and plants leaves from green plants in source. This entry took a lot of time since I...

Many duplications of the copter created the tracks for the 'Copter Coaster'. The copter was manipulated to create the coaster cars and small props with motion blur were added. People in cars are from photo by dtcreations at morguefile.com. Thanks so much.

From the Top of His Head

The background, vase and flower arrangement are all created from the source photo, The foreground wrinkled fabric I found on cgtextures.com (thanks to Nasirkan's winning 'dock' entry.) Thanks Nasir! Please see my SBS for all the details. 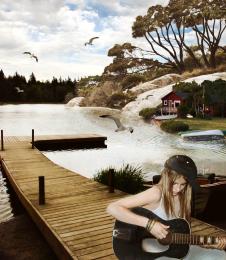 Thanks to the following at morguefile.com: rosevita for a gull; penywise for the pier photo; luisrock62 for the other flying gull; Girl with guitar and cabin sources are my own.

Bird in a Gilded Cage

No outside source were used. Additional roses were created from the source image, the dove photo is my own, and cage was created with paint brush tools.

My own photo of statue was used along with the source photo. Please see SBS for all the details.

We Need Brains Too!!

Have loaded other sources in my SBS. Thanks to all the following at morguefile.com: oOoOxmodsOoOo (crow); diciu for flying crow; jfelias for the castle; missyredboots for the faarm and file scene;

The source was used to create the flowers. The background was created with one of my original paintings as reference, and the butterflies are painted in. Details are in my SBS.

One That Almost Got Away

Thanks to beglib at morguefile.com for the water and seaweed source and also to jeltovsky at morguefile for the fishing hook.

This Chinese Dragon was created from the source photo. All details are in my SBS. Thanks to nasirkhan at morguefile.com for the fireworks photo.

Many thanks to mensatic (pottery), bosela (red leaves), and bosela (ferns) at morguefile; Also, to mqtrf at pxleyes.com for the ivy. The dove, ribbon and roses are drawn in with brush tools. Please see SBS.

Reading is a great adventure. Thanks to the following at morguefile.com for use of their photos: ronnieb for knights;dave for clouds; peachyqueen for carousel horse;jfelias for the castle; pdigital for 2 books photos; jeltovski for books w markers; taliesin for ringneck doves; lcg for flying dove; ...

All done from source. Will upload SBS ASAP.