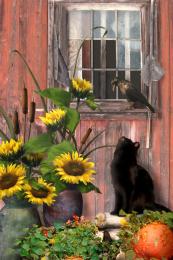 Thanks to FrodoBabbs at flckr.com for the window and weathered building photo and to jpmckenna at flckr for the crow. Other sources were my own except for the main source sunflower photo. Cattails and leaves 'handmade'. Did make some light changes and added noise to cattails.

Only the source was used. Fork was duplicated for container, line material behind flowers, and entire background. Jewels were made into flowers, and large flowers were formed from fork handle. Detailed SBS Have added 1 more step. Uploaded the wrong final.

Background is a design using the fork, and flowers and hummingbirds are all created from the fork handle and the red jewel. No other sources used. Please see SBS for detailed desc. 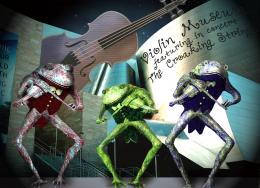 Thanks to mike-in-ny at flckr.com for the nebulae source; Thanks also to kconnors at morguefile.com for the building source for background; and to atis547 at flckr for the frog statue; 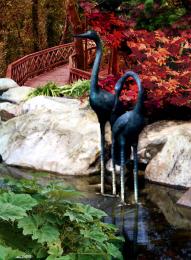 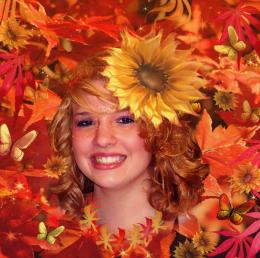 Used my own photos and created sunflower and butterflies. This tells how beautiful autumn is to me, the beauty soon will turn to snow, but renewal to look forward to in the spring.

I believe this was one of the contests the week that the site crashed and was called 'A Special Gift'. Have always wanted to finish it, so this is a good time. Flowers are from source and birds are my own.

Global Fashions of the Future

All is from source except the girl (my own photo-with permission) and the greenhouse source used for the neck of the costume. Thanks to frenchbyte at morguefile.com for the greenhouse photo. Have edited by adding another pattern layer. 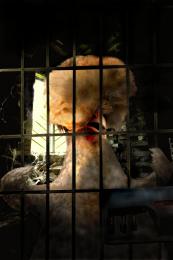 Only the source photo was used for this entry and Adobe 6 tools. Please see SBS for detailed description. 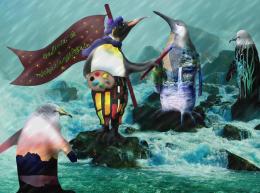 Lots of fun with this one! Thanks to the following at flckr. com: hassi (Niagra ice source), marufish (penguins); at morguefile.com: kblount (underwater design), mobinukaem (stained glass); at CGTextures: sunset Landscape

I fell in love with this beast statue when I saw it on flickr.com, and the garden scene I had planned took a different turn. Thanks to the following at flckr for their great source photos: ell brown (Monet garden), kenny_lex (garden statue), JohnMorgan (reclining frog fountain), Max xx (green frog...

CAN it be Orchids???

Only source photo was used . A reference photo by kaiyanwong223 at flickr.com was used for large orchids. My own photo was reference for small orchids. Container and stand at bottom, line material running through the arrangement, butterfly, small orchids and also tea lights and holders at top wer...

Song of the Sea 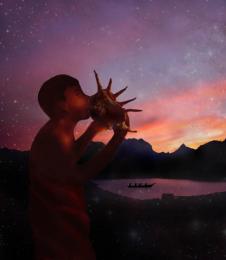 Music of the Seashell is the 'Song of the Sea' . Thanks to mrhappy8 at flckr for the image of the musician, and to CGTextures.com for the gorgeous sunset sky. Also, to oregonkat at flckr for the boat. Have added the star layer and cropped out some of the background in an edit to feature figure...

The Crested bird is created from the source roots - feather by feather, and enjoys the cool water in the forest which was a portion of the source photo of roots. Please see SBS for the details. Thanks to Picture Taker at flckr.com for reference source of birds, used ONLY as reference. 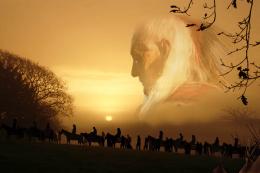 It is said that many tears were shed as Indians, native to America, were forced to move from their beloved homeland further into the West. Many of them died during the long trip, and later other Indian tribes fought them for invading 'their' lands. They were truly a big part of the 'Wild West'. Th...

Dragonflies at the Pond edited

Bird Sculpture, Water, lilies, and dragonflies- all are made from the source photo. A source of colored leaves by richard_b at morguefile.com was used for color in the water. Dragonfly reference photos are included in sources. Thanks to Maggi_94 and x.u.k.i. at flckr.com for those. 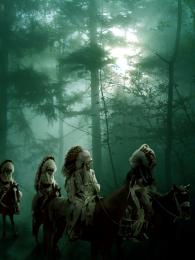 Indians must have been so happy in their beautiful lands before white men came. Thanks to thivierr at flckr.com for the Indian and horse sources; thanks to vauvau at flckr for the beautiful misty woodland photo. 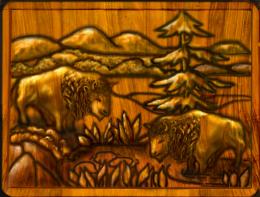 Have wanted to try to do a wood carving for sometime, so here it is. It's a challenge, but everyone should try this sometime. Thanks to cgtextures.com (cesar vonc) for the wood background photo. No other sources were used. Hope you will check out my SBS, too. 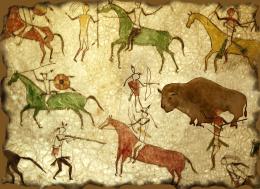 Thanks to Irish_Eyes at morguefile.com for the cave painting photo used for the background. One horse was removed, then buffalo and 2 more hunters added with brush tools. See SBS for details.

Special thanks to the following for their great sources: chicks57 for the vintage postcard angel, and badastronomer for the nebulae - both at flickr.com Also to dave at morguefile.com for the cloudy sky source photo. Birds I created with brush and smudge tools, as well as roses and ribbons.

Arrangement to Cry Over 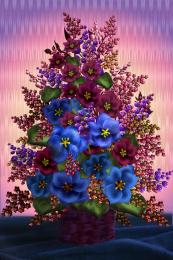 You would, indeed, feel like crying if someone gave you this arrangement - it is full of onions from the background and container, to all the flowers. With a close look, you will also see all the little onions that were used in the pearl-like decorations among the flowers. Hope you enjoy - but don... 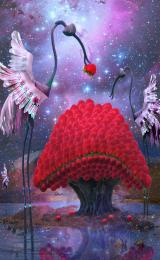 No outside sources used. Only my own source photos were used along with the contest source.