Ok a really Obnoxious alternative rock band called "Chicken Wings" with their newest album "Mac 'n' Cheese"... No outside source used... Just pen tool, custom shape and different fonts... Since the band is suppose to be obnoxious... I tried to made the album obnoxious by us...

Well I think I went overboard... But I loved the headphone stock... Wanted to use all, but could use only 4 outta 12... But using the same person/ model does bring good consistency in this template... Yes, I made it in a template, but it's a a mock template, coz it's not in the actual size... ...

Forgive me for my lousy naming convention and for this entry being similar to an another entry here... Anyways I haven't chopped in a while, so I think my chops will be choppy for a while lol... It's like I am back from hibernation lmao... Anyway this took me a full week, not coz I spend lots... 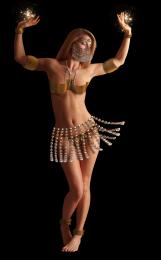 First time I saw this source and this is almost what I pictured lol... Image of girl from deviantart... http://mjranum-stock.deviantart.com/art/Various-7-55383588 Thanks to Marcus Ranum( http://www.ranum.com/) He says it is okay to use his stock for contest and outside da... here is his...

Oh well... This is the first time I ever attempted something like this lol... Please watch in High Res and comment... Need advices as where I made mistake and where I need to improve... Well I dunno whether I will be able to implement it now, but it will be useful for me in the future... An...

Ok steampunk is really visual eye candy stuff... So I kinda find it hard to make eye candy stuff... I hope I got the steam punk genre here right... Well I know it looks nothing like victorian era here lol... But now and then it's okay to bend the rule a little :).... Constructive criticism ...

Ah well very hard to do anything with this source... So thought of making a jigsaw puzzle lol... Advice to improve image is welcomed... P.S. Please watch high res... Edited version... Also made the background a canvas... please don't ask me why lol...

Well I couldn't think of any name lol... Well I tried to do something with the source and this came out... Actually this is an edit version... No outside source used... Also used smoke brush by capris... P.S. Watch in high res...

I want to be the minority

Oh well... I was remembering some song when this song came across my mind... Also I performed this song on stage as a bassist and singing the song... So I thought how do I depict it... This is how... Well a really simple image lol... "I want to be the minority I don't need your authorit...

Am really having a artist or creative block this week... Can't think of anything... So made a simple collage depicting the song "War Pigs" by "Black Sabbath"... I really didn't go full at it... Coz if I go full length into it, it will really be political... And I didn't want t...

When I first saw the source pic... I thought woah it looks like aliens pod... So made an simple image lol...

All done... Well kinda spent a lots of time on this... Anyways thought of making a mech... So made one... My first time :) Character is Yuriko( a random japanese name which came to my mind when I was making this image)... She lost both her arms and leg in a freak accident... Later she was m...

Made three characters based on steampunk genre... Well I didn't go for full steampunk influence... The character seen here are the technician Ab, his robot partner Al and a giant spider robot created by Dr. Golem( p.s. I know arachnids has 8 legs... this 6 legs are on purpose) The game revolve...

Okay... Before you guyz/galz want to vote or see the sbs or even comment... Read this please... The contest theme is "To create your own character or make a new character for an existing game"... But you may find the suit wore by this female character quite similar... Of course it wi... 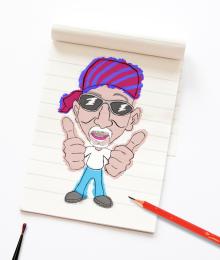 Made with a rough sketch and then painted it rough to give a watercolor look( thanks to someone suggestion :)) Used some outer source to give a different look... Hope the subject will like this one... Also I did obtained permission for it... 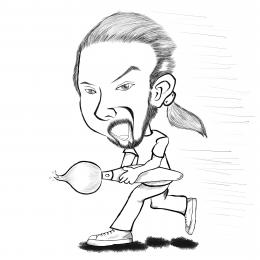 Well this is my first attempt ever at caricatures... I wanted to give a solid thick lineart look at the beginning, but later on due to some circumstances had to go for the rough look... I hope the subject doesn't mind... Also I asked his permission and he said it was okay... Also before looki...

ASCII art is fun to watch and to make as well( although I never tried it)... So I thought of making one for this contest... There is also an art like this made by apple i guess... I hope the person is recognizable here... Oh lol... He will be, since I used his name all over this image... :P ...

Actually wanted to make a potrait... But in the end it turned to be like that... I hope the subject doesn't mind... Btw the subject looked nice in short hair :)

I know this member has been done before... But there is no rule stating that a member cannot be done twice... And basically I couldn't resist... The pic is so much screaming " Do some art with me"... And I mean in a good way... That pic sure has an artistic feel to it( IMHO)... So he...

Actually wanted to create fantasy/rpg characters based on the mascot... But later on dropped the whole idea... Then after seeing *cough cough* someone's revolutionary pic, I thought of this idea... Making a family outta the mascot... Hope you guyz like it... P.S. Please Check Full Resolutio... 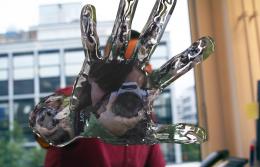 Looks like an shy chrome guy... Just a simple chrome of the hand using chrome filter and a few adjustment and blends... Plus the displacement filter... And thanks to Gary Scott for that girls photo... And any advice to improve this image is readily welcomed and esp. on how a reflection will re...

I know there's already a same type of entry... But i was already in the process of finishing this one and I thought it would be a waste not to upload it... Only source, photoshop and illustrator used... Please Check Full Resolution, As in small size image quality is lost... Comic is in A4 size... 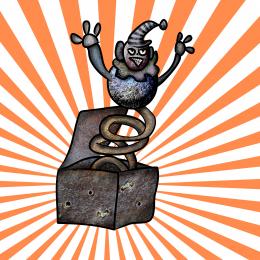 Just thought how will a jack out of the box will look is made from this source... So gave it a try... No external source use... Just the contest source, photoshop and a little Illustrator... Would really appreciate advice on how to improve it... Thanks :) **Edit: Got rid of the black backgr...