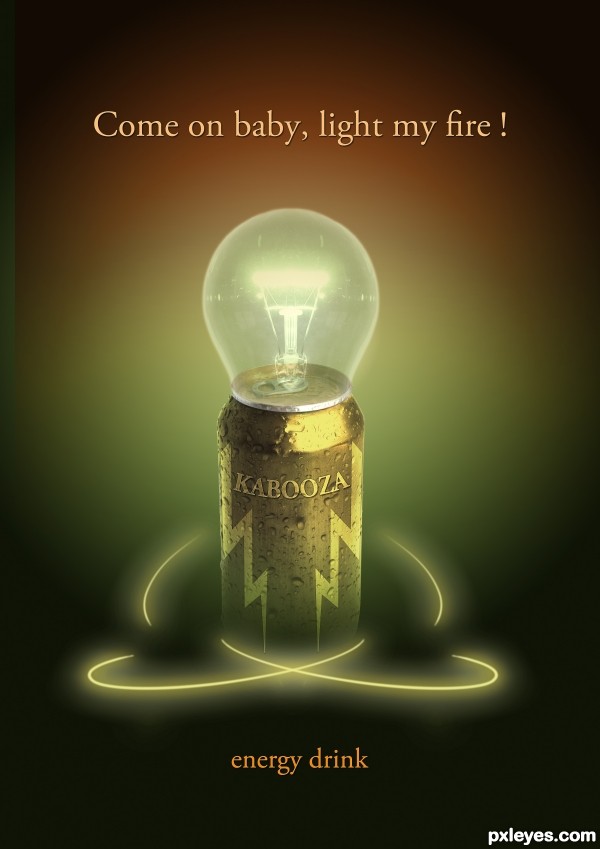 Creative idea to depict 'energy' with the 'drink.' "Kabooza" does not match the curve and perspective of the can. The bulb's perspective doesn't match the can's either, alhough that discrepancy is less noticeable. If the arcs are an allusion to atomic energy, I think brighter arcs with more plausible orbital paths circling the body of the can would be more compelling. I think the headline is a bit misleading as there is neither a baby nor fire in the image. Dropping the headline would yield a dramatic, understated (epitomized by the all-lower-case "energy drink"

I think there are a few things that I would look at improving...
1: The 'Kabooza' on the can needs to wrap around the can
2. The can and overall presentation would come across better if it had a bottom, with a mirror finish reflection.

not entirely convinced about the lightbulb or the title text but it's your vision so...

Yep, wrap the type & give the can a bottom.

It's cool! But I agree with the type and the bottom.

With this bulb u could use this slogan "the best energy drink in the world,with kabooza ,even nerds get some"...

...again just a joke author,i like your idea and execution...best of luck

yes, hi hi, with the slogan i had little problem becouse i dont know very well english so i think :the doors: my favorite band..... so erathion you are right

Congrats for your first place, Nanaris!

Congrats for your 1st place