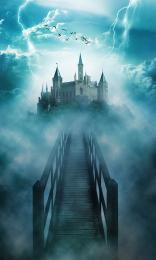 Winning entry, with a score of:
68.1%
By ChristianDarmali

We've had City in the Sky contests, now it's time for you to make your dream house in a cloud...the catch is it has to have a bridge leading to a mountaintop, just in case your helicopter or flying car breaks down! 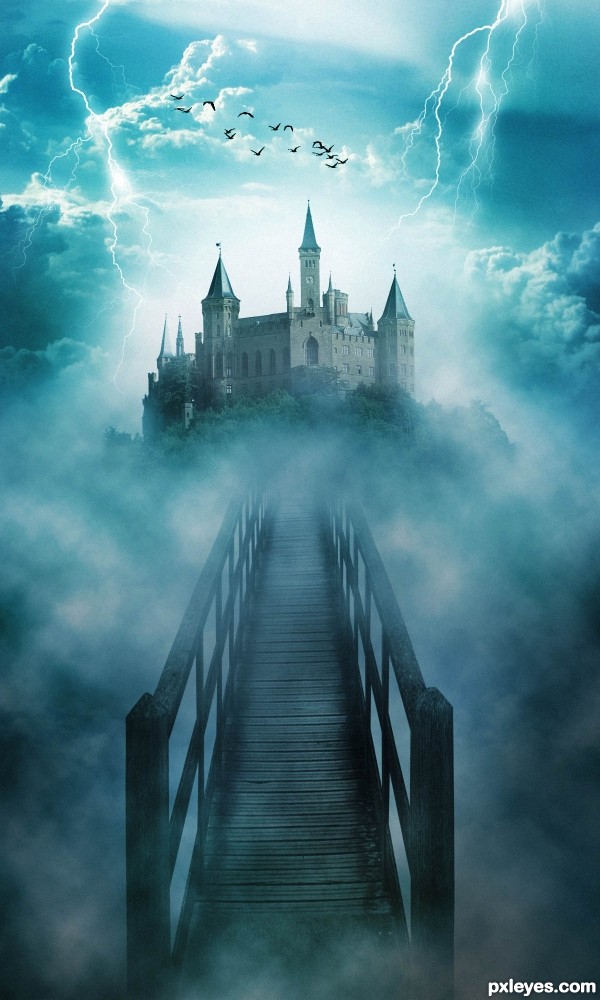 Perspective on far end of bridge should be much narrower.
It also looks a whole lot like the preceding entry...same bridge source, same composition.

Love this one, If I had written the theme, this is what I would have imagined.

this is my sort of awesome. i would so love an ipad wallpaper of this. brilliant work. i really hope you win. good luck 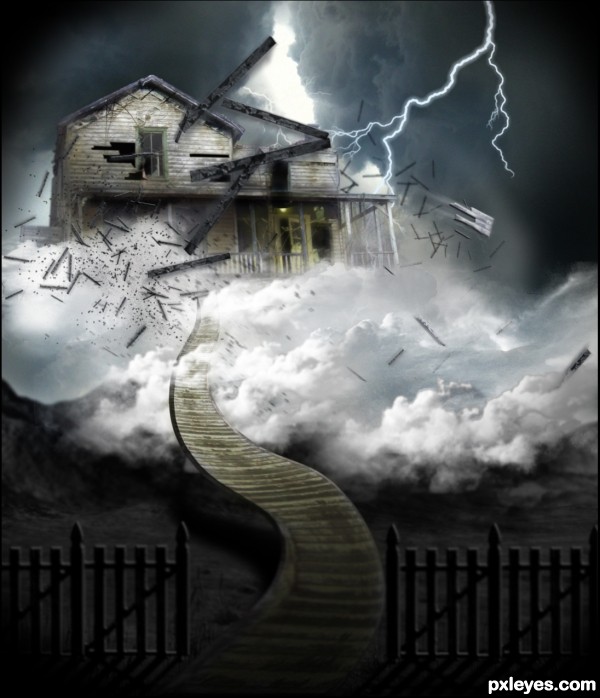 Thanks to: (As if my links and atribution therein is not enough)
lukasbenc on FLIKR thats spelt F_L_I_K_R By lukasbenc
No real name given + Add Contact
This photo was taken on January 13, 2008 in Albion Park Rail, Wollongong, NSW, AU, using a Canon PowerShot A460. and can be found at http://www.flickr.com/photos/lukasbenc/2225979346/. Joined:June 2006
Hometown:Sydney
he is: Male

bronayur: By bronayur
Jayu+ Add Contact
This photo was taken on December 15, 2006 in Hales Eddy, New York, US, using a Fujifilm FinePix F10. Found on flikr! Spelt F L I K R and can be found at http://www.flickr.com/photos/bronayur/328198101/. Name:Jayu
Joined:April 2006
Hometown:Hershey, PA
Currently:Harrisburg, PA, U.S.A.
he is: Male and Single
Occupation:Nurse

As for the grass brushes, as a link to the source isnt enough there is no known or mentioned author, i found them on Obsidiandawn.com at this link: http://www.obsidiandawn.com/grasses-plants-photoshop-gimp-brushes so we will just say thanks DUDE(ette)

A plain thanks and link was not good enough so Now that weve all been introduced!......

Author, you where simply asked to credit or thank the authors of sources 5 & 7, the terms of use are link and credit. It is also a polite thing do, to thank the people who provide source material.

A good image that IMO relies too much on brushes. I know the author has good PS skills aside from using premade brushes.

what a great take on this contest 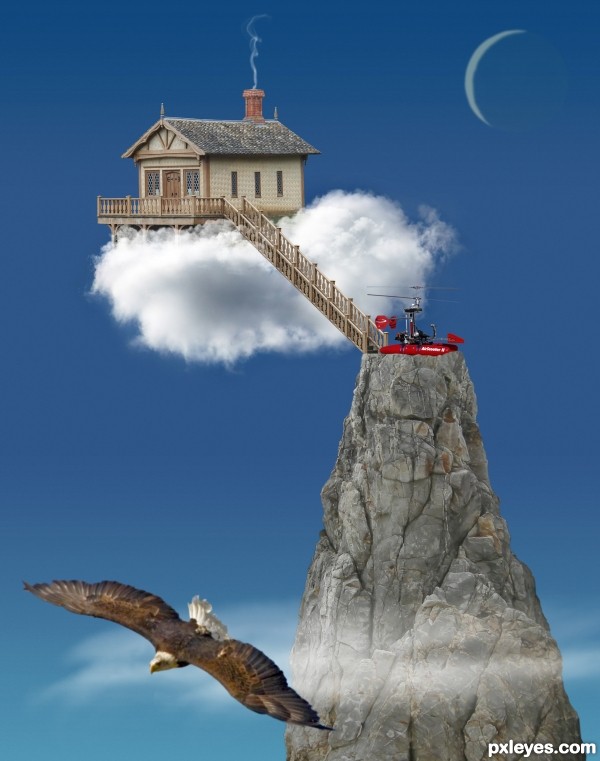 I love what you've done with this. There is a simplicity and clarity that I think works very well for this entry.

I understand the purpose of the eagle, however, in my opinion, I don't think it's needed and that it detracts from the main elements.

IMHO the eagle creates depth, but I can see your point.

reminds me a little of the movie 'Up' . I like your clarity and simplicity . the eagle makes a nice extra focus point to help the rule of thirds & balance the composition i think. well done & good luck

the work is well done.. I think you could have nestled the house a little more into the cloud.... IMHO I find the house looks as if it is supported by the ladder.... but that's me... good luck 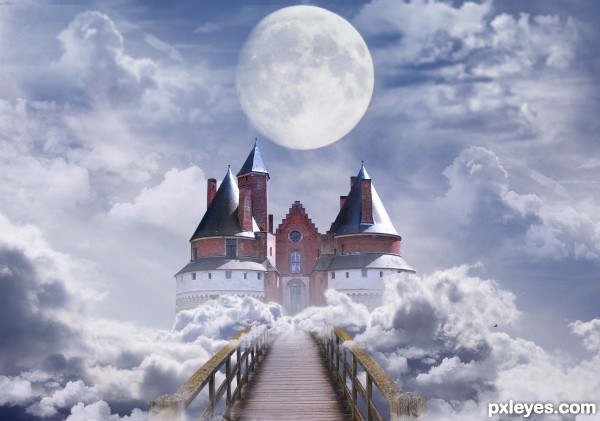 The railings look like they're dissolving, without any cloud overlap. And full moons don't happen at mid day, but oh well, right?

true...no full moons at mid day but then again, houses aren't really in clouds either are they?

Nice but you may want to soften the edges of the castle since the quality of it is a bit more blurred. Good luck!

i like it & love the full moon in the day effect. Real wonderful to enhance the surreal feeling. nice work. good luck.

Draws you right in .. gl author 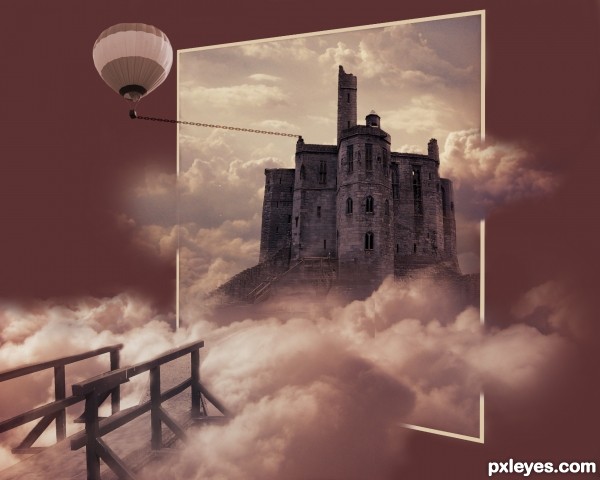 Mostly good, but you changed the perspective when you scaled the castle vertically, and the balloon would be tethered vertically, not horizontally.

Evocative elements. However, I don't get why the balloon is tethered by an out-of-scale chain let alone why one would even need a balloon if you already have a house in the clouds. Plus the balloon is the focus of my attention, not the house. I would delete the balloon. Less is more.

The simple wooden bridge strikes me as a bit too rustic for an approach to such a castle-like home. And the dark windows make the home seem abandoned and uninviting.

The title delcares 'colorful' yet the image's palette is quite muted. I think there's an appealing Instagram feel here that could be emphasized with a square crop and perhaps a hint of vignette.

thx for ur comments cmyk46 and the suggestions to make the image better, and for u Dan: full of compliments as always.... i rather have u to say nothing at all instead of all the negative criticism, i suggest u make an image urself to show us all how it has to be done..and look up the word surrealisme and u will understand such images like mine, and one more thing, if i would live there u would certainly not be invited..