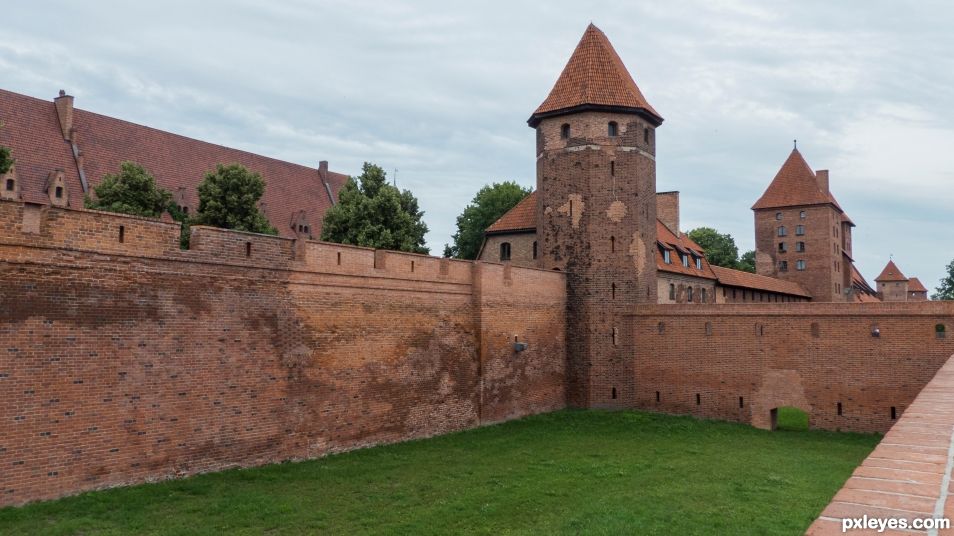 The Castle of the Teutonic Order in Malbork, located in the Polish town of Malbork, is the largest castle in the world measured by land area.
It was originally built by the Teutonic Knights, a German Roman Catholic religious order of crusaders, in a form of an Ordensburg fortress. The Order named it Marienburg (Mary's Castle). The town which grew around it was also named Marienburg. In 1466, both castle and town became part of Royal Prussia, a province of Poland. It served as one of the several Polish royal residences, interrupted by several years of Swedish occupation, and fulfilling this function until Prussia claimed the castle as a result of the First Partition of Poland in 1772. Heavily damaged after World War II, the castle was renovated under the auspices of modern-day Poland in the second half of the 20th century and most recently in 2016. Nowadays, the castle hosts exhibitions and serves as a museum.
The castle is a classic example of a medieval fortress and, on its completion in 1406, was the world's largest brick castle. UNESCO designated the "Castle of the Teutonic Order in Malbork" and the Malbork Castle Museum a World Heritage Site in December 1997. It is one of two World Heritage Sites in the region with origins in the Teutonic Order. The other is the "Medieval Town of ToruÅ„", founded in 1231 as the site of the castle Thorn.
(5 years and 75 days ago)

Nicely composed, makes me want to go back there.