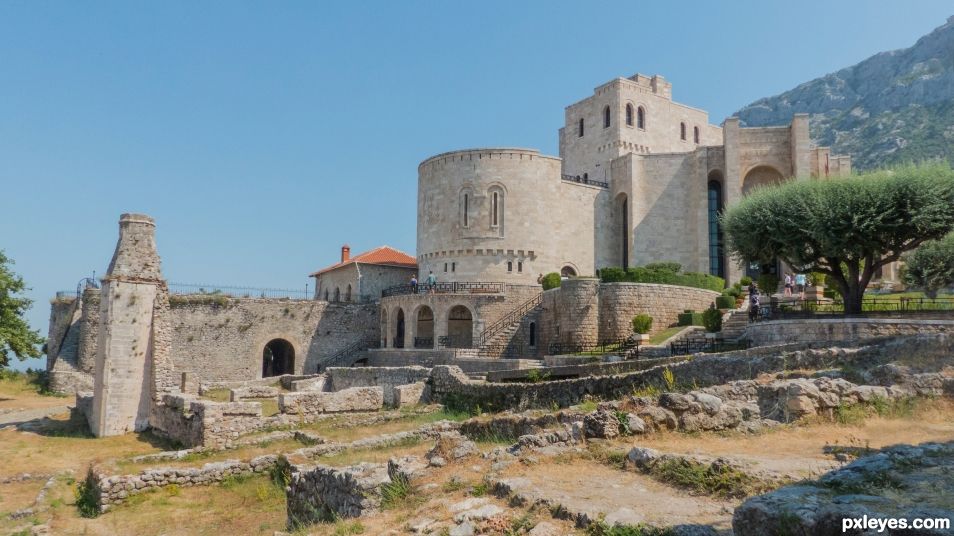 The KrujÃ« castle is a castle in the city of KrujÃ«, Albania and the center of Skanderbeg's rebellion against the Ottoman Empire. Inside the castle is the Teqe of Dollme of the Bektashi (an Islamic Sufi sect), the National Skanderbeg Museum, the remains of the Fatih Sultan Mehmed mosque and its minaret, an ethnographic museum and a Turkish bath.
During the Albanian Revolt of 1432-1436 the city was unsuccessfully besieged by Andrea Thopia and Ottoman rule was restored. After Skanderbeg's rebellion in 1443 the castle withstood three massive sieges from the Turks respectively in 1450, 1466 and 1467 with garrisons usually no larger than 2,000-3,000 men under Skanderbeg's command. Mehmed II "The Conqueror" himself could not break the castle's small defenses until 1478, 10 years after the death of Skanderbeg. Today it is a center of tourism in Albania, and a source of inspiration to Albanians. KrujÃ« Castle is situated at an elevation of 557 metres (1,827 ft).
(Wikipedia)