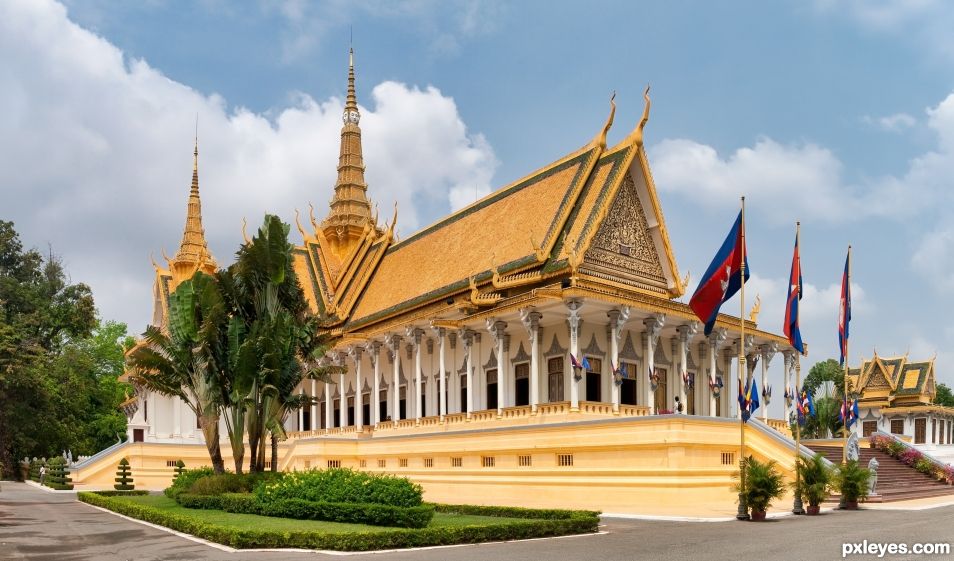 The Royal Palace, in Phnom Penh, Cambodia, is a complex of buildings which serves as the royal residence of the king of Cambodia. Its full name in the Khmer language is Preah Barum Reachea Veang Chaktomuk Serei Mongkol.
The establishment of the Royal Palace in Phnom Penh in 1866 is a comparatively recent event in the history of the Khmer and Cambodia. The seat of Khmer power in the region rested in or near Angkor north of the Great Tonle Sap Lake from 802 AD until the early 15th century. After the Khmer court moved from Angkor in the 15th century after destroyed by Siam, it first settled in Phnom Penh which back then named as Krong Chatomok Serei Mongkol (Khmer: áž€áŸ’ážšáž»áž„áž…ážáž»áž˜áž»ážážŸáž·ážšáž¸áž˜áž„áŸ’áž‚áž›) in 1434 (or 1446) and stayed for some decades, but by 1494 had moved on to Basan, and later Longvek and then Oudong.The capital did not return to Phnom Penh until the 19th century and there is no record or remnants of any Royal Palace in Phnom Penh prior to the 19th century. In 1813, King Ang Chan (1796â€“1834) constructed Banteay Kev (the 'Crystal Citadel') on the site of the current Royal Palace and stayed there very briefly before moving to Oudong. Banteay Kev was burned in 1834 when the retreating Siamese army razed Phnom Penh. It was not until after the implementation of the French Protectorate in Cambodia in 1863 that the capital was moved from Oudong to Phnom Penh, and the current Royal Palace was founded and constructed. (5 years and 80 days ago)