Merry Christmas! I've used a gradient as background. The three is a lightbeam brush from obsidian dawn (http://www.obsidiandawn.com/light-beams-photoshop-gimp-brushes). The star in the top of the three and the stars on the background is from the same brush pack. The ornament on the three I've mad...

The little match girl is a fairytale written by the danish H. C. Andersen in 1848. It is about a little poor girl selling matches. It is christmas time, it starts to snow and she freezes to death. People walk past her, nobody seems to notice her. One of the scenes in the fairytale is when she burns ...

I have used three sources for the cat, and one for the violin. The lights I have drawn by 1) draw a rectangle, 2) use gaussian blur (with gradient mask), and 3) distort. I have also rendered clouds, and added a structure for the floor. Hope you like it!

I think the perspective in the original image makes this contest difficult. To be able to have a horizon and some perspective in the image, and not only the ground around the tractor, I lifted it up in the sky:) Credits to: manandjstoc for the clouds Ariaocstock for the tree to the right

This is blending of 15 teddy bears and a lot of other stuff. I have also added fairy dust and color tone. Please enjoy the teddy bear picnic:) There isn't room for all sources in the form, so here are the rest of them: bear1: http://www.flickr.com/photos/robertfrancis/3520390 91/ bear...

The masters of the air are making ready for take off. Pilot Goose, first officer Goostown and second officer Goosestreet will defend the gold medal from last year. This is made by blending, scaling and rotating 12 layers. I have warped helmets and goggles to make them fit the geese heads. The mo... 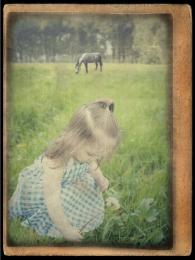 I thought the horse was elegant, and I wanted to give it an elegant rider. From there the image developed step by step, I didn't have a plan from the start The background image with road is my own. Thanks to ThePieman at stock.xchng for the Castle image, and to billingham for the raven - also...

I have changed a lot of settings in lightroom and added gaussian blur in her face. 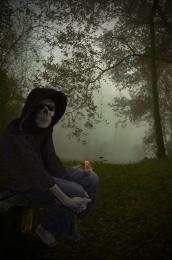 I have added the horse, lake, tree and the clouds. Further, I have made shadows to the ground and light from the sky (filter: lightening effects). I also have used curves to adjust the colours - one adjustment layer for each part of the image (snowy mountain, horse, tree, sky). I hope you like it! ... 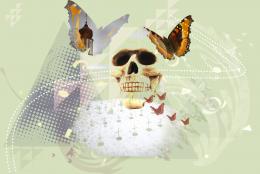 I have basically drew some geometrical forms, duplicated and scaled them, added a lot of swirls and stuff, and blended in the scull, church, graves and butterflies.

The soul is not a simple thing. Photoshop painting, filters and photos.

If monkeys ruled the world, they would sit down and think.

I have used three layers only and merged them together using layer masks. The landscape is from Denmark, and it's my own picture. I have flipped it horizontal and rotated it. The sofa I got from Flickr (source 1). The pig image is one of my own. I had to clone on of the legs because one of the legs ...