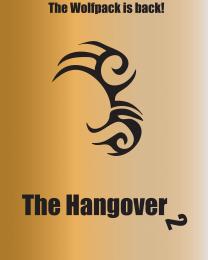 I chose colors that they seem to use a lot in the posters for this movie. For those unfamiliar with the movie, the significance of the tattoo is that one of the characters wakes up with that same tattoo on his face! 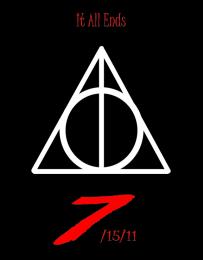 This is what I had in my head. I was trying to make the seven look a little bloody without being too bloody. There are still some younger fans. 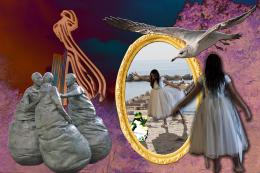 The council of elders is determining whether the little girl will be allowed to cross over into our world. The seagul is a messenger between the two worlds. It was, of course, inspired in part by Alice in Wonderland, but not the original. I was watching the one that SYFY channel produced. Absol... 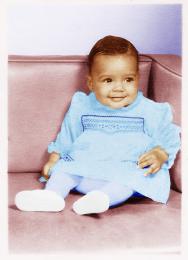 This is my own photograph of my cousin Dawn when she was a baby. The original photo was black and white with a sepia tint. I converted it to black and white and colorized it.

Seems to me that a Tin Man can't be anything but steampunk! This looked a lot better with the texture I had overlayed on the image. But it's premanip that I didn't create myself. :( Maybe I should start making my own textures.

For: your username contest

I know that we have a butt load of these in this contest but I decided to do one anyway. The original pic has selective desaturation, but it was too blue and too washed out. So this is my attempt at a nicer desaturation.

Pretty Flowers in a Bowl. Only the source used.

If we're going to get muddy, we should go all out! 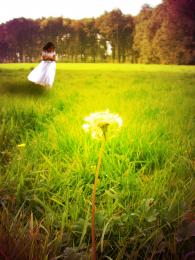 Little girl taking a walk through a field finds a dandilion for which to make wishes. The picture of the girl is mine.

Once again, I probably over did it with the Adjustments an editing. But I like the way she came out, even though I probably could have done it in fewer steps.

I'm not really sure. When I saw that fissure, the first thing that I thought of was a gash in someone's hide. It was also my intention this contest to use an image from my own library. The image of the man is my own. Oh yeah. The tattoo on his neck is the Kanji character for Love.

I was thinking, The Matrix? when I created this. Thank you LuckyStock for the Fetus. *I provided a link to the contest as requested by the owner of the fetus photo. 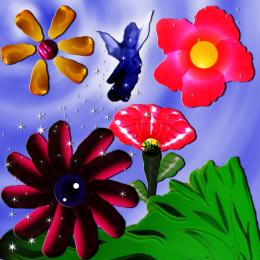 I'm determined to create as many images for this contest as possible using only my own sources, or using only the source provided. I know that the pixie isn't the best, but it is from the pxleyes source. Only the source and photoshop was used in the creation of this image.

I made their eyes. Then couldn't think of anything else to do with them with their new eyes. So I figured, maybe they could hold something. Looked like they were holding something. So I looked through my own catalogue of images and found my folder of Pxleyes downloads and decided to give them cool s...

Dude! Someone's In Your Jello! 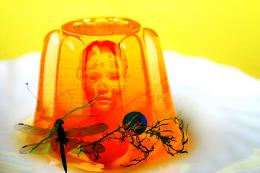 Since someone already did the bugs in the jello (jelly if you prefer) which was the first thing that came to mind for me, I decided I had to think of something even more disgusting to put in a jello mold. Naturally the idea of a dead zombie head came to mind! I mean, what could be worse, right? ... 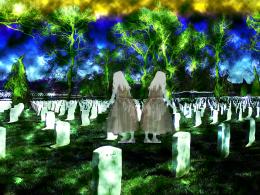 It's a picture of my daughter in the graveyard, so I decided to give it a title that was decidedly NOT about death! I hope that I didn't over do it. The photo of my daughter is my own.

...And the Cow Jumped Over The

I was surprised that no one else has done this one yet. It was my second idea. I won't tell you my first, because I might still do it. The photo in the last step of my guide is my own.

Here, the old man has part of his face ripped away to reveal that underneath he is a cat. An animorph. I have 3 grey cats. This is Alvin. He is not the Alpha male of the bunch. But he is very kind and loving. His face looks angry all of the time, but he is sweet. I call him the diplomat.

This was one of my first serious Photoshop manipulations. (I've only had PS since February.) I saw a tutorial in PS Creative Magazine on how to make fangs so I decided to give it a try. Basically, I took this picture. Used Edit>Transform>Warp on my teeth. Used red brushes on the red backgro...

I thought that he was ancient when I saw this photo, but it seems like there's some kind of magic that slows his aging. So that, although he looks to be 65, 70 years old, he's really 527. So he must be an elf. You just have to believe it to see it. Like any magical creature.