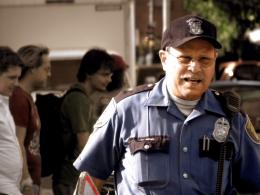 You can also use an old black and white photo that was made before color photography was invented, and then colorize it as realistic as possible. ( Example tutorial: Colorize a vintage photo )

Realism is not necessary however, you can also give unusual colors and color combinations to your photo... Combinations that do not exist in real life.
Don't forget to post the originals in your source list, or in your SBS guide. Drawings are not allowed. Your photo must be fully colorized, no gray-scales can be visible in your work. 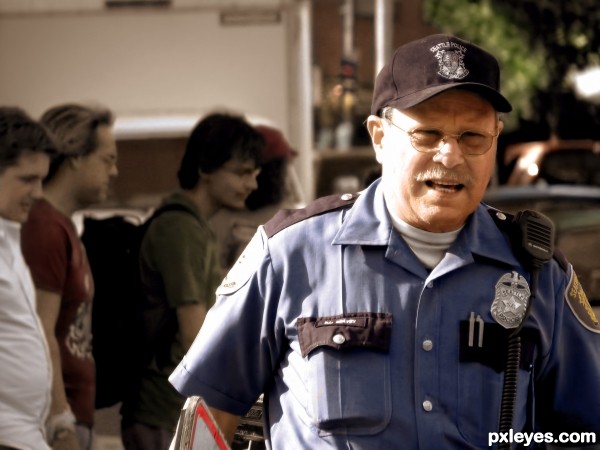 Are you sure this is a genuine colourisation... 'cos if it is, it's amazingly good!

Edit: just saw the original colour version, and I think this is even better than the original photo, the slightly desaturated background work well. Awesome job!

I had the same thing in my mind Ray when I saw this entry.. its realyl cool..

Thanks for the comment Ray. I actually didn't realize there was a color version posted. If I knew that I wouldn't of chosen this as my source. It would've been a lot easier trying to match the colors if I could've looked at the original. Looks like I got some of the colors right though. It's also a lot harder recognizing what things are without the color version. I thought the car behind the boys was part of the building and the woman with the hat on was a trash can. I even looked up pictures of Seattle police so I would know the colors of the uniform.

Fabulous job and an excellent sbs too

fantastic both the work and sbs 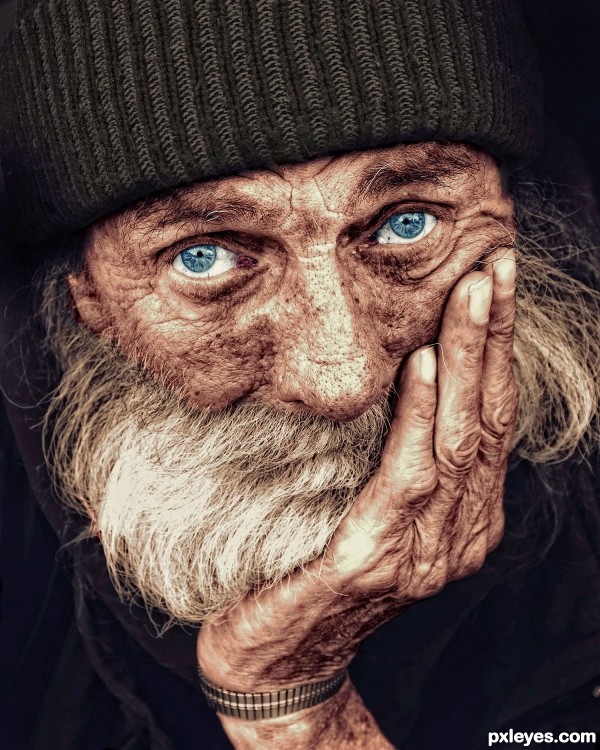 I know the sbs is not the best. I forgot to save some inbetween steps. So I uploaded only some final layers. Sorry for that.

I also wish you have a longer step by step, his eyes are great and I would like to see the details. Good luck author, great job!

seems like you just brightened some areas in the "sepia" and then just added color to the blue eyes and corner of the eye. Too bad there wasn't more of an SBS. I'll hold my vote.

OMG, this man appeared several times in Pxleyes, but from different sources. One appeared recently as the source image in the Bearded man contest, provided by Jaskier (I though that he took the photo) http://www.pxleyes.com/photoshop-contest/15291/bearded-man.html. But the author of the photo you use in sxc.hu is the other person, and other shot of him was picked by Clinge to use as the reference in Dodge and Burn contest: http://www.pxleyes.com/photoshop-picture/4b223b756e126/Old-Man-Thinking---.html. Is that any coincidence?
Focus on the main thing is about your work, it's very well done, the sepia tone and the blue eyes fit perfectly

. However, I think if the bear is less sepia a bit, the overall contrast can be increased. Good luck!
EDIT: that's exactly what I suggest, very nice

It not just a matter of brightening some areas in sepia k5683!

, but if you look closely hat, beard, face, eyes and bracelet also all have different colours

(and not with just an overlay, try it yourselves and you'll notice that it doesn't work that way).
Please don't judge entries (not only mine) on a SBS, there is seperate voting for the SBS....
Please judge in the result..

Thanx Langstrum for the useful comment, created more contrast between face and beard now, hope you like it!

OMG I am just blown away, GREAT JOB!!

CONGRATULATIONS on your beautiful work! 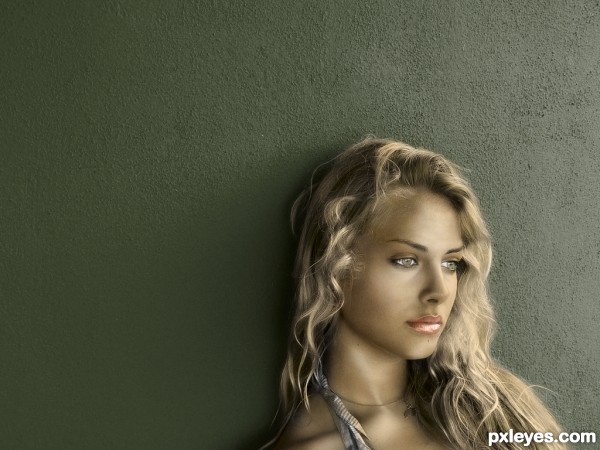 Nice one. Would love to see the SBS for the hair. Personally I hate a very glossy lipstick, but well.. it IS a model picture after all.

for the hair a aply a yellow color on multiply mode then two layer one in multiply and one in lighten mode i paint the ligtning and the shadows of hair, and ofcourse a tablet for pressure sensitive, on the lips yes widiar u are right i aply the color in color mode, and becouse the initial source picture had strong light maybe i should aply multiply again in lab color, i dont like either the lips.... maybe i will change it....
thanks for your comments. 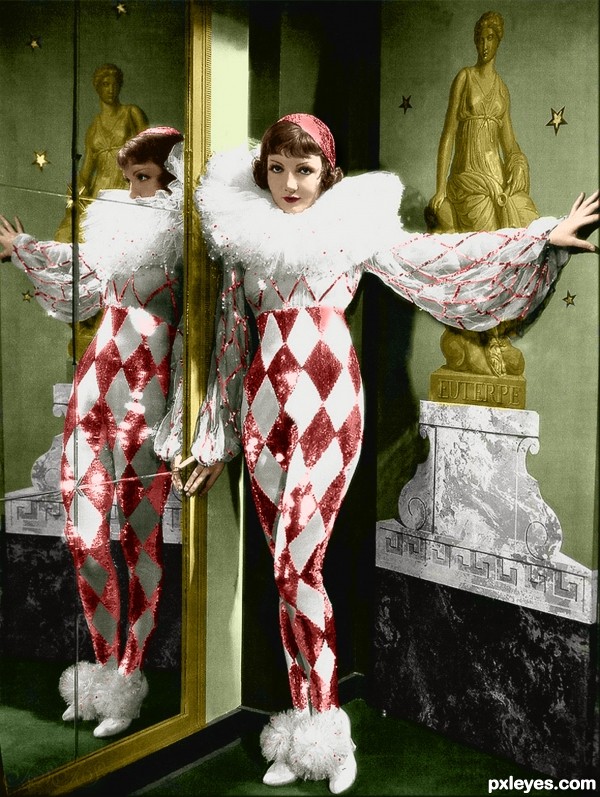 Wonderful work! Maybe give the mirror image a slightly different shade, to have just a bit difference between the real and the mirror image.
Nevertheless I love it. Good luck! 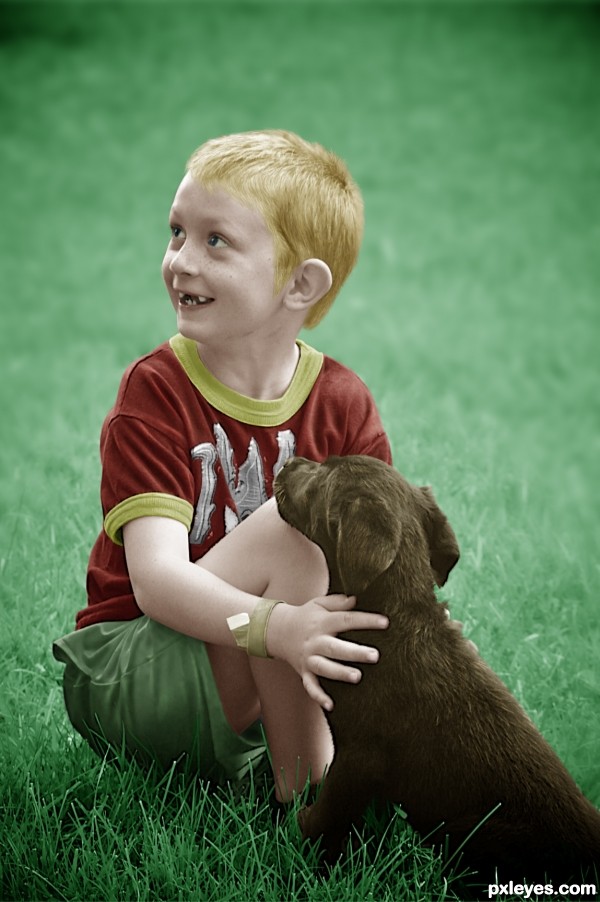 Great job, just the sideburn looked a bit sharp to me. Good luck

I agree about the sideburns (and hairline), but overall very good job, as well as the SBS. Great work.

thanks for the suggestions, Updated....

Wow!!! I love that grass.....very nicely done
Good luck to you author

Love this! Awesome job! Great work on coloring such small details too.

u deserved much better