I used my own background photo - The Dollywood Carousel. After masking out one of the seahorses, the color and balance (Adjust) was used to change the color. White horse on carousel was erased, girl riding the horse was taken out of a copy of the background, then seahorse inserted where horse had ...

Just got back from vacation, missed my cat so much, so decided to use him in an entry. His head was used on all of these shore cats, and the dragonfly was used from PXLEyes stock photo by gopanKarichal - thanks so much.

We came from there???

Thanks to two of GolemAura's lovely photos of Zen gardens, I saw the perfect place for these pretty little dolls. The hanging flowers are from my own photo, and the flowers in their hair are created from the group of dolls. (See SBS)

The Bear Went Over the Mountai

A Fine Day for a Sleigh Ride

All my own photos were used in addition to the source background photo. A layer of pattern was added at the end to give the effect of snow falling. There's no feeling like riding in a sleigh with snowflakes hitting your face. 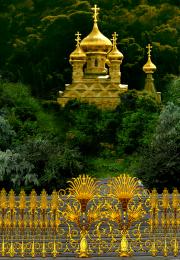 I used two source photos for the background. Thanks so much to: lisasolonynko for Church of Mary, and to mzacha for the other of which I used the foreground. The gate is created from the contest source.

Good Music and a Fine Cigar 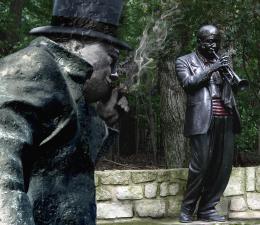 Churchill surely needed something to put a smile on his face when he was in power. Satchmo might have been all he needed. This entry uses some brushes beyond the ones provided in my photoshop program. I had to figure out where to find new brushes and how to load them through a zip file. Smoke br...

This bachelor has invited a lady to his pad for the evening. The source was used along with a brush stamp by Faeth at deviart for the hat. My thanks to Faeth for sharing PS. The rest is my own material, along with hand rendering of hearts.

We photographed this moose statue on a trip and thought it would be fun to use in this contest. Thanks for the cathedral background to hillike at PS sources and to shebaduhkitty at morguefile for the bell.

Bongo and the Buffalo Guys

Bongo and the Buffalo Guys join in on Home on the Range. Thanks to Cornelia at PS stock for the cute bear photo, and to Lelaina at PS stock for the beautiful cloudy sky photo. Drums are by aeryith at morgue files. Thanks so much. The buffalo was my own photo. SBS up soon.

Autumn Along the Creek

My apologies, but I inadvertently hit the 'no comments' choice when I uploaded this entry. I don't know how to change it. This is a blending of knotty tree photos to create a rhythmic abode for this owl family. Please check out my SBS. Thanks to the following for the use of their great photos: ...

Owl source used, and thanks fille at pxleyes.com for the delightful street lamp photo. Bats are hand-drawn with paint brush and eraser tools. 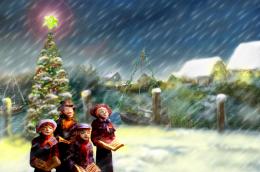 3 tools used to create this entry. This really is not as easy as some might think and gives one a lot of practice while trying to work without layers, etc. This was done from scratch with no reference materials. Just having fun with tools. 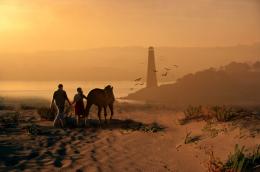 Thanks to the following for their great photos. cybervin at morguefile.com for the people and horse 'beach_walk'; to mqtrf at pxleyes.com for the sky and ocean background; I added the lighthouse and birds with the brush tool.

Dance of the Dragonflies 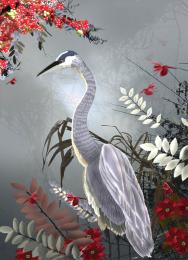 This is my Christmas holiday wish to everyone at pxleyes and all those who enjoy it so much. I wanted to name it Dance of the Sugarplum Dragonflies, but not enough room. Thanks to OldGreySeaWolf at morguefile.com for the inspiring photo of the reed relections used for the background. The only ot...

This is OUR turf - GO HOME

Hey, big fella, this is our turf. Why don't you take your girlfriend and go back to the zoo where you belong??????You are in the WRONG place! Thanks to zambyoo7 at pxleyes for the lighthouse photo; to click at morguefile.com and kabir at morguefile for the gorilla back photos and gorilla with ha...

There's nothing like the sound of the echo of horse's pulling a buggy through a covered bridge. Thanks to click for the buggy photo and to cohdra for the country road photo (both at morguefile.com) The cute Amish children are by whatimeanttosay at morguefile.com and the dog by robb at morguefile. ...

'She's not looking, so I want just a taste of that yummy ketchup! Boy, I love birthday parties!' Just a photo of my own along with the source photo.

Those written about in our family bible geneology pages hold many wonderful memories. I wish they could actually 'pop up' and become real again. Thanks to the following: At morguefile.com, kakisky for the boy with the kite; clarita for the background of books;hotblack for the man flying the kite;...

For: pop up book contest

Except for the butterfly by Clinge at pixleyes.com, (Thanks so much, Clinge) background and all flowers are created from stems, buds, and seed pods of papaya source photo.