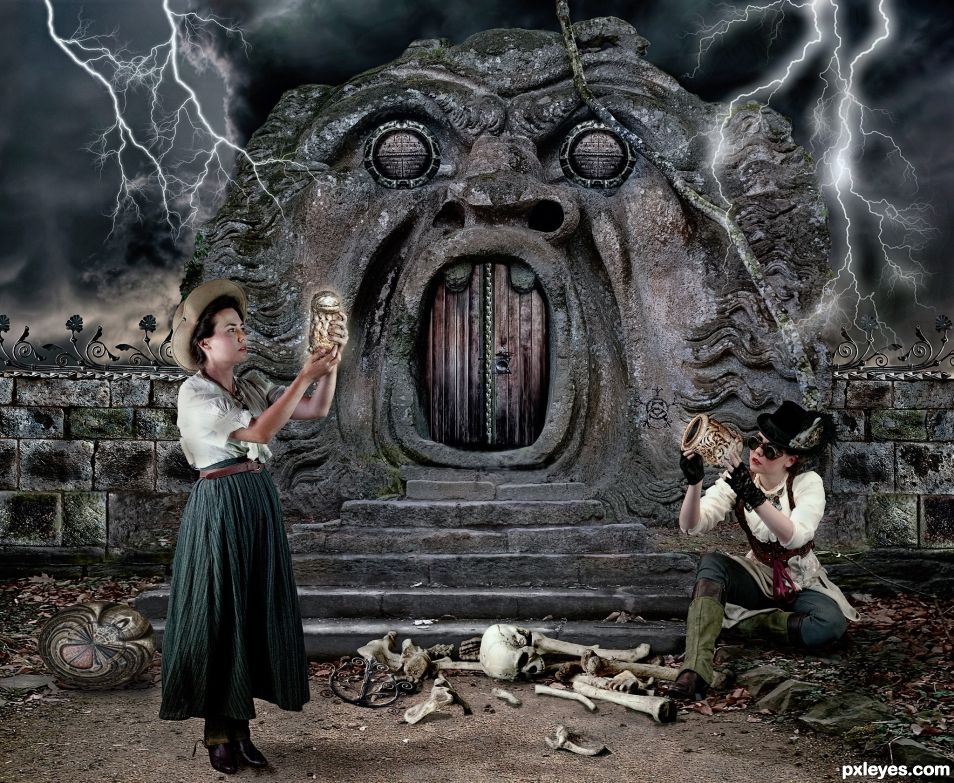 Hunting for treasure is a dangerous business. It could get you killed, especially if the treasure is cursed. Lightning could strike you at any time without notice. (2 years and 80 days ago)

Good work. I like the whole scene and it makes the eyes wander around to soak in the "story". I tend to nit pick what I think are the better chops, so here we go. Not a big deal but there is just something odd about the blending of standing girl's feet into the ground - more on our left side than the right. The object in her hand does not look like it's "glowing". If it were, parts of the woman would be reflecting that light more (for example see her far arm/shoulder are dark). IMO the lightening should not be in front of Ugly Rock Monster or maybe manipulated more to look like it was. As it is, the lightening starts thick in the sky, and narrows at the end. If it were coming towards us, it would be at minimum thicker than it is towards the bottom (and I believe less "branches"

. There would also be mass amounts of light and would cast light reflections on the rocks monster and surrounding areas. The wrought iron work on the wall is an exceedingly nice touch and made me say to myself "Wow that was a real good use of the source" because the wrought iron stuff in the source image was just a minor detail. The people fit in wonderfully into the "feel" of the Chop. The bones are awesome and well done. The shield doesn't look much like a shield. PS mahalo for the SBS. I would not have known that was a shield otherwise.

Thanks BWR. Your critique is greatly appreciated.
Not sure what you see as odd about the feet? Too much dark shadow maybe? I will lighten it later if I get time, or if you have any other suggestions as to what to do about it, I am all ears.
The lightning is supposed to look like it's aiming for the women. That's why it's in front of the rock monster and aiming toward their heads. Not sure how to make it appear more "in front" than it already is.
It's all part of the curse. That's what happened to the last treasure hunter. Hence the bones on the ground and the wrought iron thingy near the bony hand.

I just used the lightning brushes as they were and didn't bother altering them. It never entered my mind to erase some branches.

The shield thingy doesn't need to be a shield. That's just the first word that popped into my head when I was explaining it in the sbs. It is just some kind of treasure. The treasure hunters can always do some research to find out what it really is since it doesn't appear to be have been used as a shield.

It might be some kind of fancy plate or even some symbolic emblem which holds "the curse". The imagination can have some fun with it.

Anyway, I might not have time to fix it today because I need to go out in 5 minutes and by the time I get home, it might be too late, so what will be will be.

I am very honored that you think it is a good chop in spite of the mistakes.
Thank you again for taking time to critique it so thoroughly.

I think that "odd" was too strong of a word. Her shoe on our left looked like it was copy/pasted and not too well blended - it was very minor and I was just nit-picking. The other shoe looked OK and I think it may have looked better before you just changed it.

Lightening when it's far away looks like tree branches that can be tapered to a point.

Lightening when it's close to you, looks different. It is much thicker with less branches.

Also if you notice these lightening bolts are all not a single color, so maybe using something like Outer Glow, Inner Glow, or Shadows, etc in your Layer Styles can spruce them up.

Just another idea.. since they are about to die because of the curse, how about a vulture waiting for a meal. haha. Up to you. Mostly joking and trying to be funny, but it may work, may not.

Oh, since you asked, one more nit-pick. The residual branches/leaves on our left of the rock monster, above the lady's hat, looks out of place. And finally check this out https://image.ibb.co/fBL7QH/eye_critique.jpg

Hi BWR, Nit picking is good because it helps me refine the minor details and improve the overall effect. Not many people bother to take time to help like that let alone make sample images to show the author where the problems lie. Your help is greatly appreciated.
Sadly I was unable to fix them because I was too tired when I got home last night but I will definitely remember the tips for any future chops.
Thanks for the lightning references. I will keep in mind to add a purplish outer glow to any future lightning I put into chops.
The vulture idea is great. I wish I had thought of that.
Anyway, I can always improve on it for my own satisfaction since it's too late to change it now.

Sure was BWR. I consider that an equal first between the three of us when there is less than one point difference. 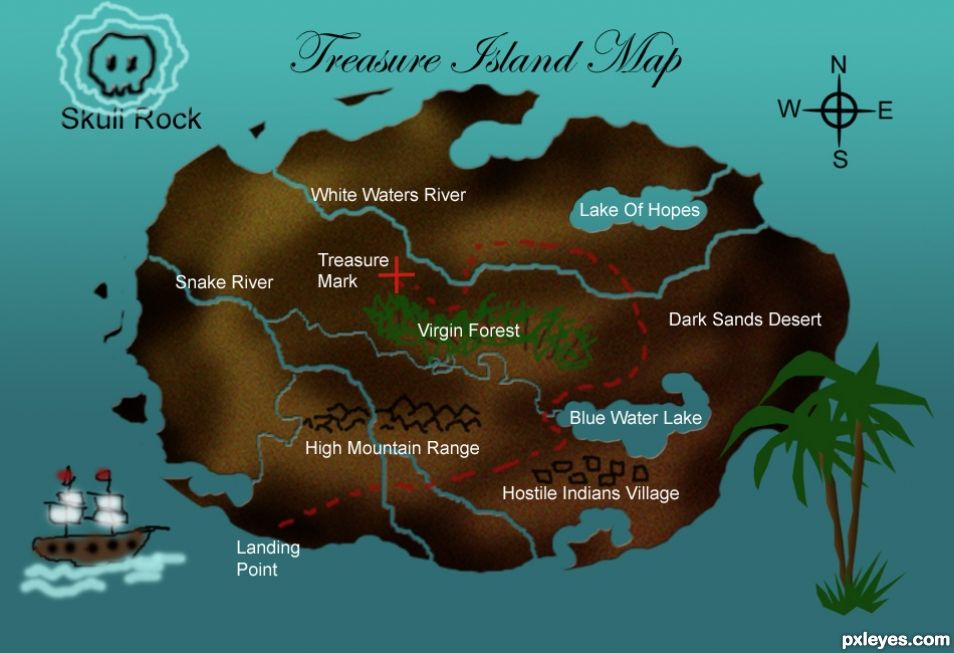 They are about to find the treasure hidden in the heart of the Treasure Island. They have to endure difficult times, lives will be lost. Pirates are determined to find it and to enjoy, at least part of what they are fighting for. (4 years and 201 days ago)

So very clever, reminds me of the pages of the old Lord of the Rings books that had the maps in them (Before I could read) I used to page through them like crazy! Great thinking on this one

I did not want to go to all the trouble of looking for pictures that are not copyrighted, had some trouble finding some, so.... I said... Let's have fun and make it easy..... Thanks for your comment my friend. 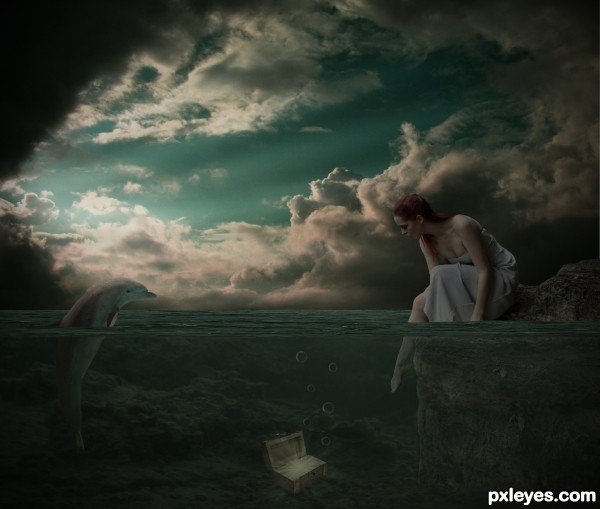 Nice work,very creative....Am new here and i want to learn more of photoshop.Could you help me with some tutorials please...Thanks

Fantastic work,author.....
I like the color combination and your design concept.
GL.

It's nicely put together, but imo it can do with some highlights, to accentuate some of the elements.This way you may increase depth in your image. Good luck!

Great sourcing and really nice use.
As wazowski pointed out you could do a bit more with the light...if you made the sky a bit more dynamic you could use the light from that to accentuate other parts of the image and therefore make it look more cohesive.

thx for ur comments, added some lightrays hope it looks better now 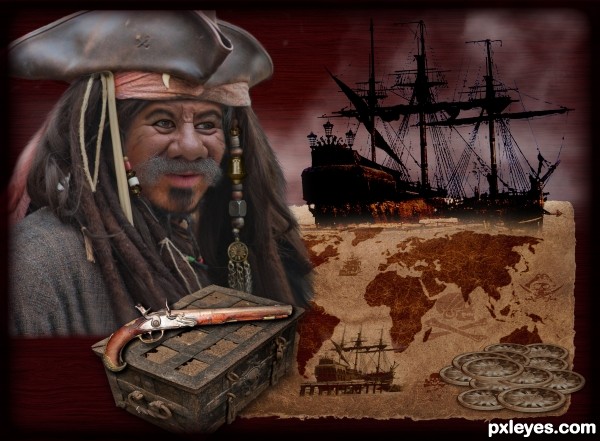 Nice job on the hair. The fog and wood texture are well done too.

has that movie poster feel gl

Majesty Of The Sea - created by SaEllisson 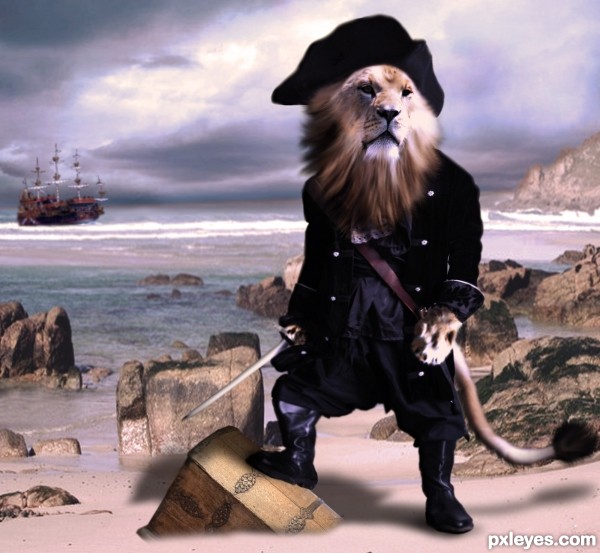 Yo ho ho, and a bottle of ROAR.


Thanks to:
mjaranum @ deviant art: http://mjranum-stock.deviantart.com/ (5 years and 1075 days ago)

now he is fun...gl author

This head seems a little big, but because it's so funny, it's beautiful, bravo