No Coffin Needed - created by etherealities 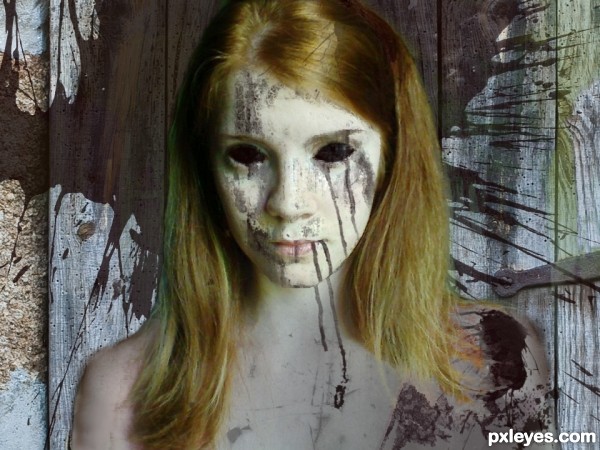 My humble attempt at creating the walking dead. Hope you guys like it!

The sources I used are linked to, other than those it was all brush-work, blending, and color manipulation. (5 years and 1661 days ago)

i love the vibe i get from this picture very creepy :P

Has potential, but it looks more like someone wearing a mask to me because the body doesn't match the face. Hair and shoulder edges lack the crispness of the 'mask' which emphasizes the maskiness of the face.

I see, I see. There were pink sleeves in the original image that I had a lot of trouble covering up. I'm not good at some things in photoshop yet.

If anyone has tips on how to cover things like that up more efficiently, I'd love to hear them!!

Why the need to remove the pink sleeves? If you thought they were too cheery for the walking dead, you could select them and change their hue to something more somber. But I think the contrast between frilly and dead would actually enhance the creepiness.

I thought about leaving them in, but somewhere along the lines of making it I had the idea that bare shoulders would just be creepier. The problem I ran into with them was making the edges I had to erase (that were sticking out past where the natural arm was) look natural and not blurry. Which as you've noted I never did quite accomplish, haha.

I do like the occasional mixing of creepy with "cheery" though, it just wasn't working for me in this one.