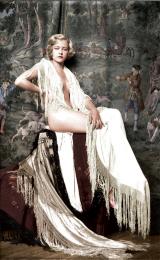 You can also use an old black and white photo that was made before color photography was invented, and then colorize it as realistic as possible. ( Example tutorial: Colorize a vintage photo )

Realism is not necessary however, you can also give unusual colors and color combinations to your photo... Combinations that do not exist in real life.
Don't forget to post the originals in your source list, or in your SBS guide. Drawings are not allowed. Your photo must be fully colorized, no gray-scales can be visible in your work.
Remember, that only one single photo can be used! No chops are allowed in this one. 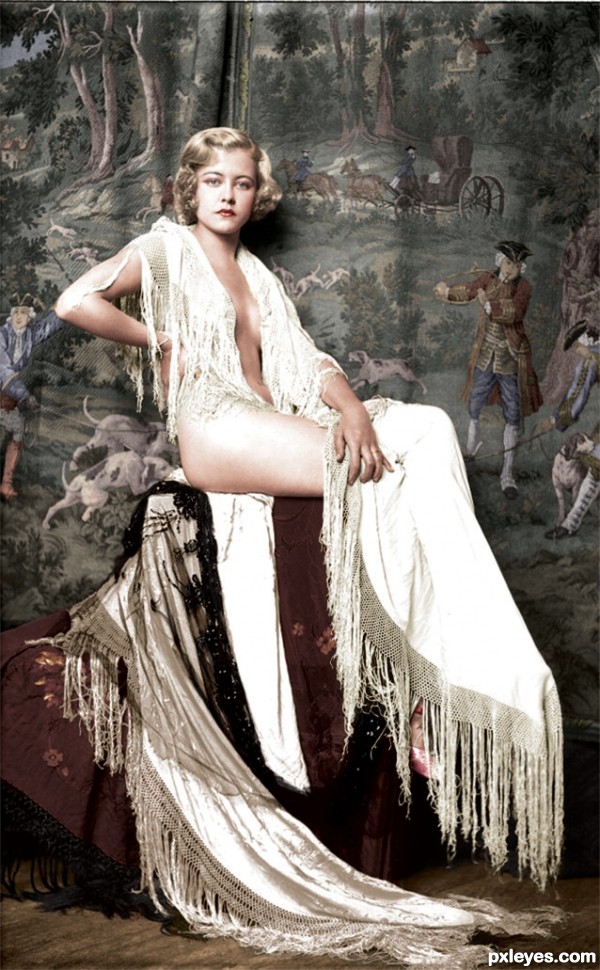 PLEASE, take some time to read the description ;-)

I love pin-up girls, especially those from the early days.. I have been searching for beautiful old shots and it was very hard to find one respecting the "explicit nudity" rules on pxleyes, most of the images are â€œsurpriseâ€ nude, in a very beautiful way, it has to be said. And there for a warning when you visit the source link, stock page.
A big thank you to Gentlemansclubstock on DeviantArt.

I found her and instantly fell in love ;-)

If I have to put a date on this photo, I would guess it's been taken around 1920 - 1930. The roaring 20's, flapper era, maybe later. That would mean she was born around 1900..
I have been searching through old pin-up girls from that time and she has a striking resemblance with, for example, Marion Davies, see http://www.google.nl/images?um=1&hl=nl&client=firefox-a&rls=org.mozilla%3Anl%3Aofficial&biw=1221&bih=866&tbs=isch%3A1&sa=1&q=Marion+Davies&aq=f&aqi=g1&aql=&oq=


I wanted this image to be as close to real as possible. I could have gone overboard on a psychedelic theme but I wanted to show the picture how it would have been taken so many years ago.. Through the eyes of the photographer, may he probably rest in peace.

The tapestries behind the girl I did some research on too.
I found out that Jean Baptiste Oudry designed a series of tapestries (1736-1749) depicting the hunts of Louis XV (Wikipedia)
In this photo there are two different tapestries, if they are real that is to be considered, but it seems they where duplicated much in the early 20th century. I found some similar things in both tapestries, but there are differences in these and the one on the photo, witch I found out while painting. I have to say I did use those tapestries to help me deciding on color in the clothing of the â€œhunting menâ€. I wanted the colorized image to be as close as real as possible, I thought she deserved that. The images I used for reference is one of a Antique store in Belgium, and one is for sale on a Belgian Ebay kind of site, I have contacted both and I will provide the links in the source.

Needless to say, this image has so much detail.. I have spend hours colorizing this image. It has been a hell of a job.

I started out with the original image witch and got rid of some imperfections. I duplicated the layer and with a levels adjustment layer changed the overall look of the image. Made it somewhat darker and got rid of the grey-ish glow.

The original image is in my sbs, as well as a animated sbs wich shows you the process of colorizing. I hope you can appreciate this work, there are many hour involved! I put one up in hi-res as well. Take a look at it! Every detail I put in pixel by pixel..
(5 years and 2504 days ago)

Very nice job, and thanks for all the info - it really adds to it

Great job on this, looks good. I think it would be even nicer if you saturated the color just a little.

Thank you @kyricom and @Ichappell. I find the image here different from that one in my screen.. How is that possible? This one is too bright in color.. Lets see if I can fix that!

*EDIT* I think I got it now.. Saved it for web and devices, it is a lot smaller now. But the colors are the same as I wanted them to be.. Hope this is better!

very wonderful thoughts and it really shows the love of the subject.. excellent work

Amazing job! The subtle coloring in the background really adds to the beauty in the image. Baeutiful model picked as well.

Great source searching and great half tone of colors

Thank you all for your comments! It makes me happy that you all like it!

@CMYK46, I agree hi res could be much higher.. I wish I could show you the psd file

Author, I have to say im very big on the 1920's era, i sing alot of 20's blues at the pubs. This work is beautiful, your choice of model is perfect.
I have always loved their expressions in these photos. The colouring is very well done with the browns and greens. I love the feel of her clothing, it makes her pose stand right out againts the rest of the image

@Keiley22 Thank you so much for your top vote and fav offcourse! That makes me really happy, I think its great you have a connection with that era and I wish you the best of luck singing!

@Kathyw Thank you very much for the compliment and the fav!

This is a beaut! I also love that era with the pin ups etc. Awesome and caring job.

i'm speechless with this one. the tapestry, the girl..the color tones.

its all so breathtaking. Well done, and hats off to you. Thanks for the history lesson as well!

Thank you so much @steed, @pixelkid and @jadedink. It really means a lot that you like her so much..

Thank you all so much!! Very appreciated!!

Congrats for the first place!

I finally found her! It's Vivian Porter! Photo is taken by Alfred Cheney Johnston. Don't know if anyone will read this 1 year later.. But just in case someone does.. I found her.. Jeeejjj..

thumbs up for the passion still being there after a year 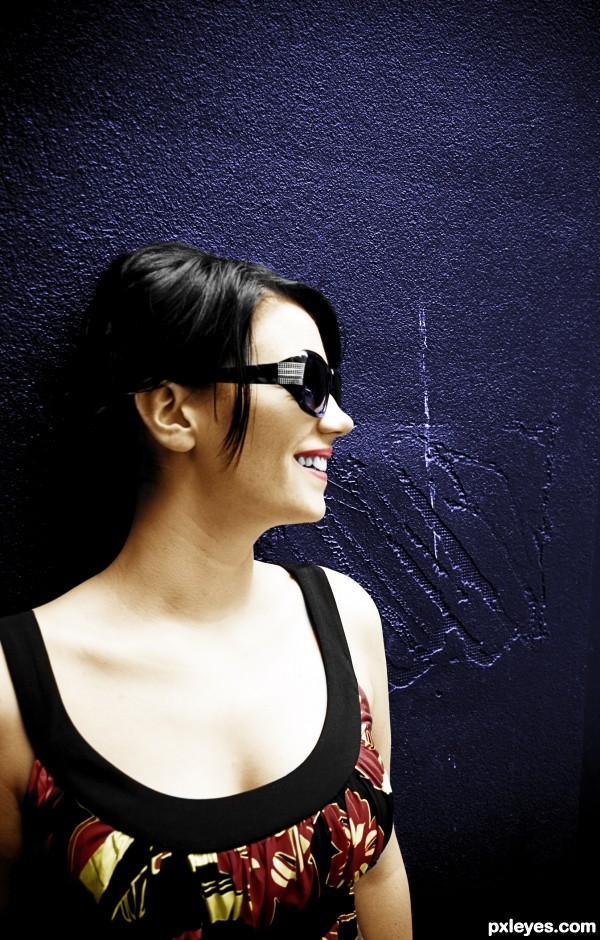 Special Thanks to Sources Photo...trublueboy (5 years and 2507 days ago)

ok.. Now I'm on a roll.. There is still some gray around her teeth, and in the inside of her mouth, and a very little little gray spot on her tunique

But that is just me being a perfectionist.. I really love what you did with the print! Nice work! 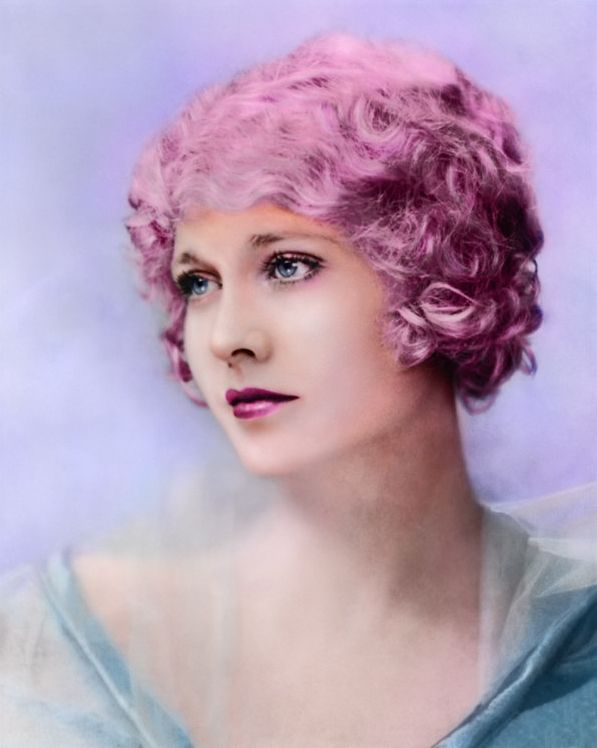 That's so interesting to do the colorization, it's like giving the second life to an old photo.
Thanks to inspyretash-stock for the great vintage portrait, lady Esther Ralston looks gorgeous.
I want to give her a quite modern looking with highlighted hair and some make-ups.
Basically what I've done is exactly the same as this tutorial: http://www.planetphotoshop.com/colorizing-a-grayscale-image.html
The only difference is I used one top layer with overlay blending mode to control the lighting because the BW image neutralizes some parts of the colored image.
I just show in SBS the comparison one by one of the original one and the colorized one, plus the work in progress in animation.
Since it's the vintage photo, I can't have the higher resolution version, but the quality is not that bad. (5 years and 2506 days ago)

Looks like a nice painting, good work. Just curious about the color you chose for the hair but I kinda like it.

The hair color is unique, but the face with the radiant highlights is lovely.

The colors are cool and the effort to match is laudableespecially, eyes wirh dress. Nice source selection. I like the final result. GL

Very very nice work author...Colorization is top notch...Interesting choice to use purple for the hair and the lips...eye coloring is master piece...well done

interesting hair colour choice, but all in all its very good work

I love these old photo's.. Love how she looks, very nice work author!

you managed to keep the softness of the original photo and really update it with colors. imagine what the woman in the picture would say to see that now??
and interesting choice of hair indeed. I just love how her eyes really pop in this though. Good Luck author!

Thanks everyone for voting, commenting and faves! 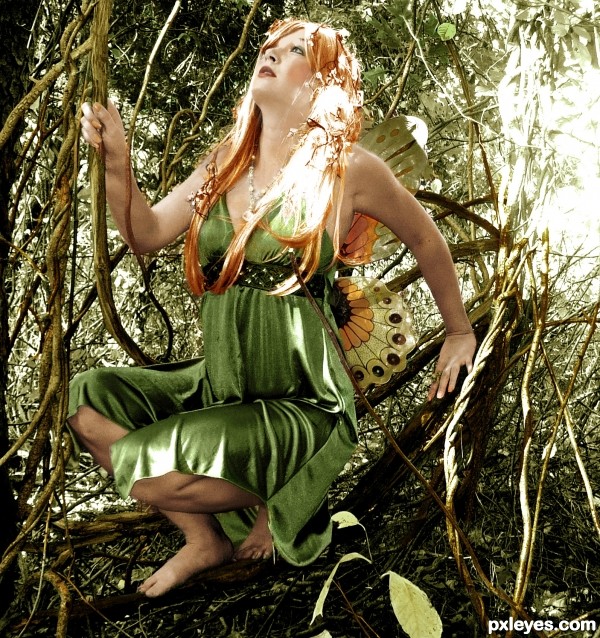 The image is one I took. The SBS is simple animated SBS. I colored each section in layers which you will see in the sbs. (5 years and 2503 days ago)

The image is cool and I LOVE the name of this. It would make a great band name.

Scroll down past the animation. The uncut source is second.

first off, i love the picture..and the tones you chose to use..however, there are some small nitpicks...there are a few spots by her arm that the flesh color bled over...and when you colored the leaves, it shows a discoloration in those spots...one of the main places you can see that is the vine in her hand. right below her hand is some stray flesh tone, and the color you colored over it is changed by that.

its a great job otherwise, and i wish you luck

behind blue eyes - created by sarita 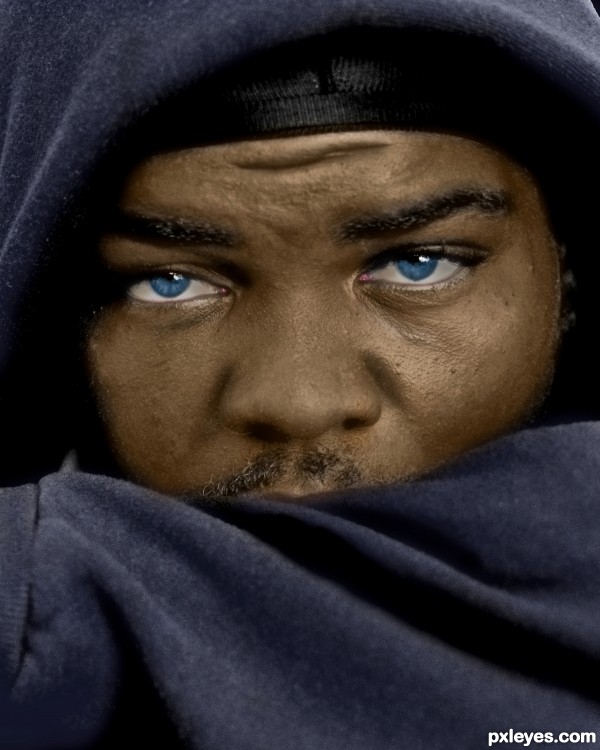 You got the skin and clothing spot on! I'm not sure about the really bright white eyes though.. maybe add a little shadow and depth into them.. GL!

I made a little change,hope it is better now...

This is a great image, but IMO whites of eyes are never pure white...there's always a touch of color. Look at other high res pics of eyes (RGB images of course) and see what I mean. It's a subtle difference, but would make your image almost perfect. GL author!

The eye whites are still too bright white. But the skin coloring is very good.

IMO the eyes are much better. Again, GL author!

nice job... all the best