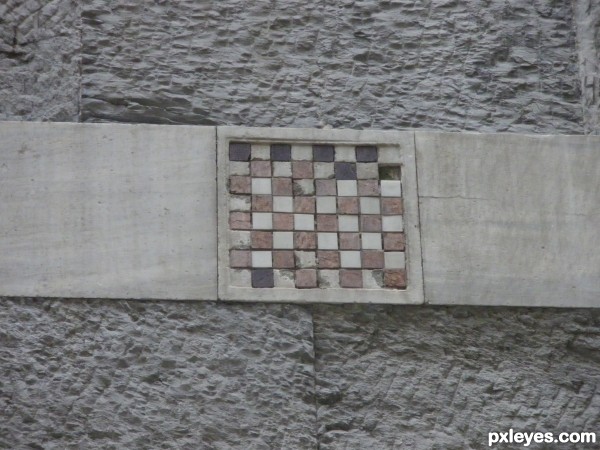 very special is the effect that sunlight has on the stones that make up the facade, arranged in two-tone black and white bands: sometimes seem to see them colored sand, where the rays strike the sunset, but if there is shade darker how to scan a duality of light and of darkness.

A 'duality' that seems to manifest itself in a symbolism on the north side (left tower), to the door of San Giovanni (that overlooks the square of the same name), in which is placed a board in two colors (perhaps originally white and black) of 64 boxes.
A board placed in such a position, moreover vertically, prompts us to ask, logically, what is there to do? Certainly not to play chess as you might say-maybe-could have been done for the three triple walled seen before (more accessible). The board, in fact, is a symbolism that we have already encountered in other religious contexts, such as the Duomo of Crema, where we focused on its esoteric meaning, which could bring to the Knights Templar. In the wake of triple walled dell'entusiastico discovery is that the board, as well as countless other symbols here, if we could-say-sin of superficiality that here the Monks-Warriors have left the imprint of their passing, we would do so willingly. Moreover, there is nothing wrong about the Templars are historically attested in Liguria, of course, as they were a bit 'everywhere (in Genoa seems certain their presence in the Church of the Holy Faith). Although we are a bit 'out of the Via Francigena, Genoa stands (today as in the Middle Ages) on a route of passage for France, through the Maritime Alps, places of pilgrimage considered as the grotto of Maddalena in the Massif Sainte Baume, or relics of Saintes Maries in the Camargue (just to mention those we have touched on this journey to discover the chemin du Cathare and place of Mary Magdalene, ...), or Spain, to Santiago Compostela. Conversely, these nations have journeyed from Genoa to Rome, or to go to the Holy Sepulchre in Gerusalemme.Su this route, it was so obvious to find activities and for welcoming the pilgrims in transit (for more information on the Templar presence in Liguria