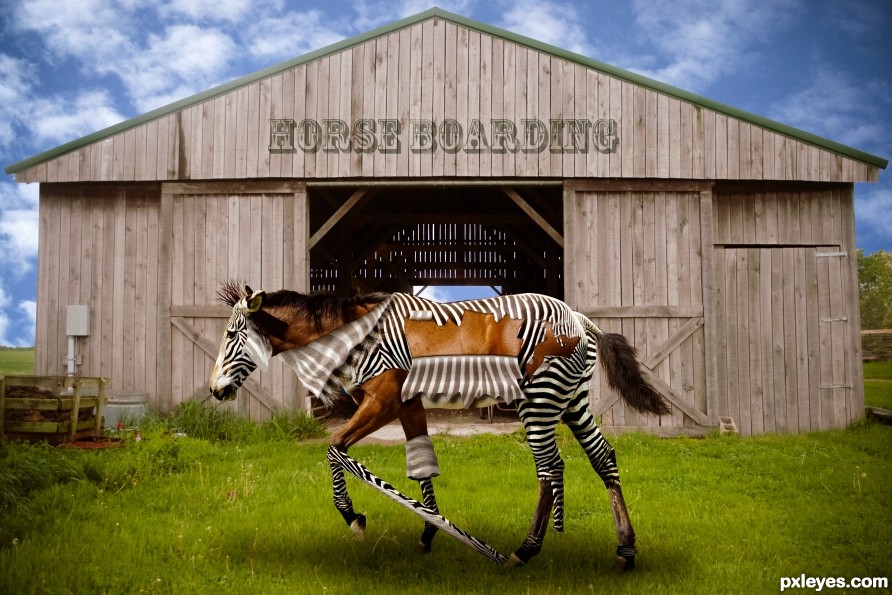 Gr8 job. My only concern at first was front left leg's peeling zebra skin felt either too straight or long. Then i realized it is being stretched by the hind leg... great detailing..

Yep exactly, and thanks. I tried to vary the skin in different stages of removal and the leg position was perfect for a skin stretch using the hind foot.

That is so cool lol... man im loving this contest, the images are wicked!!! 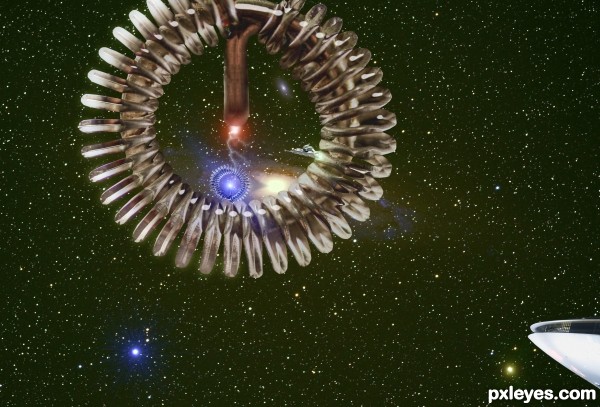 Lighting source for extreme highlights (novas) are as follows:

Mod: Happy to include "light" sources, but there was nothing in the FAQ about including this... Never-the-less, all software applications have been now listed. Anything else?

Mod: Anything else you need RE: specifics of creations?

Fun idea. The uvula-thing is both creepy and amusing. The unadulterated [purely normal] stars within the wormhole opening deviate from my (naive perhaps) expectation that a wormhole would look more like a tunnel. I also find the composition top heavy. Would vertical-flipping the flying-saucer in the upper right and moving it to the lower right yield a more-compelling diagonal composition?

Thanks for the information for the "light" sources, there are many brushes out there on the net, which is what a lot of people use and that was my assumption.

Dan: Good thought on moving the closer 'approaching ship' to the lower right of the scene. Also , to your point on the 'tunnel' - if you go into high-res, you will see we agree, as there is a faint 'tunnel' connecting the 2nd portal-gate to the distant galaxy!

I obviously like the rebalancing of the major elements (both of which dramatically extend beyond the frame of the image). But I don't get why only the second portal produces a tunneling effect. I think the uvula conceit requires a throat-like/tunnel impression from the front/first portal.

Scrutinizing the hi-res, I'm disturbed by the milk frother's apparent transparency in its southwest quadrant plus at 4 o'clock where the background stars seem to be shining through.

Dan: Thanks for taking the time to review this image in hi-res, but hey â€“ donâ€™t be disturbed, this is just a fun PS contest entry on a remote planet in a minor galaxy

. And while this creation is just a visual flight of fancy, and not intended to be a realistic illustration to a Hadron Mechanics â€˜white paperâ€™, per your comment, the dual portal-gates are supposed to be semi-crystalline (hence partially transparent) structures and represent a stabilizing pairs of (entangled?) field generators to keep radiation leakages from overwhelming (and collapsing) the wormhole (much like sonic feedback can collapse/ruin a sound system via the looping effect). Any stable wormhole will likely be created from the real tiny ones that we know do exist naturally, yet as soon as we figure out how to increase the size of one of these tiny wormholes to a scale needed to facilitate ingress and egress of a macro object like a spaceship, natural radiation will enter the system, and end up in a loop. Based on the calculation of Stephen Hawking (and others) the feedback will become so strong it would likely destroy such an expanded wormhole if stabling mechanisms were not coupled to the front and back of such a â€˜tunnelâ€™. So, said another way, without some type of dampening portals on either side of a wormhole to suppress the feedback loop of radiation, it won't last long enough to be of any stable use (through time or space). Given all this, there is at least a speck of science behind (my mostly fun) imageâ€¦ If you have any interest in Superluminal convection in general, you might enjoy some of the papers that were presented at a recent (2011) conference on such. You can get some of the abstracts here: http://www.workshops-hadronic-mechanics.org/Abstracts.zip Also while professor Ruggero Maria Santilli and Hadron mechanics may still be considered on the fringe of science, you will recall that when Hugh Everett came up with his model for quantum reality in the late 50's (later popularly dubbed the â€œMany Worlds Interpretationâ€), he was consider â€˜fringe' even by the likes of Neils Bohr. What is fringe today may be main-stream tomorrow. So -- this long-winded comment can be summarized by saying that this entry is â€œnot your fatherâ€™s cosmic milk frother!â€

@ Dan and author coughnerdscough XD just kidding please dont think im trying to insult all that stuff just goes way over my head cus im not so smart with that stuff LOL..'
ok all sily ness aside good idea to use them as wormholes