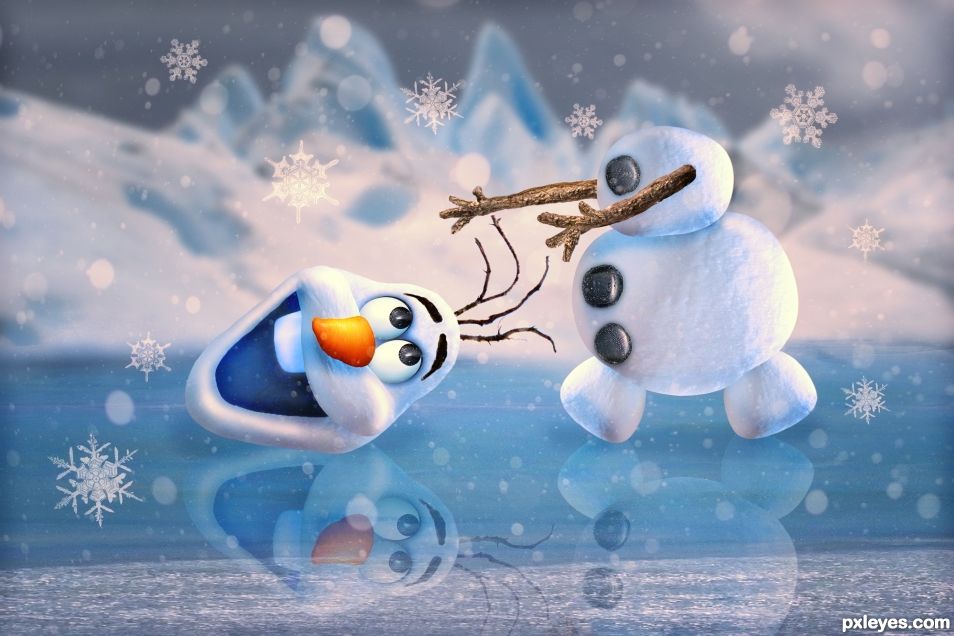 It was between you and Zizounai's Donald Duck. I honestly didn't know who would win. I knew I would be happy and sad no matter who pulled off the victory. Kongratz on 2rd.

Thanks BWR. It was a very close race.

Congrats Skyangel. Among the new Disneys Olaf is my favorite character

Thanks Sylvie, He is one of mine too. 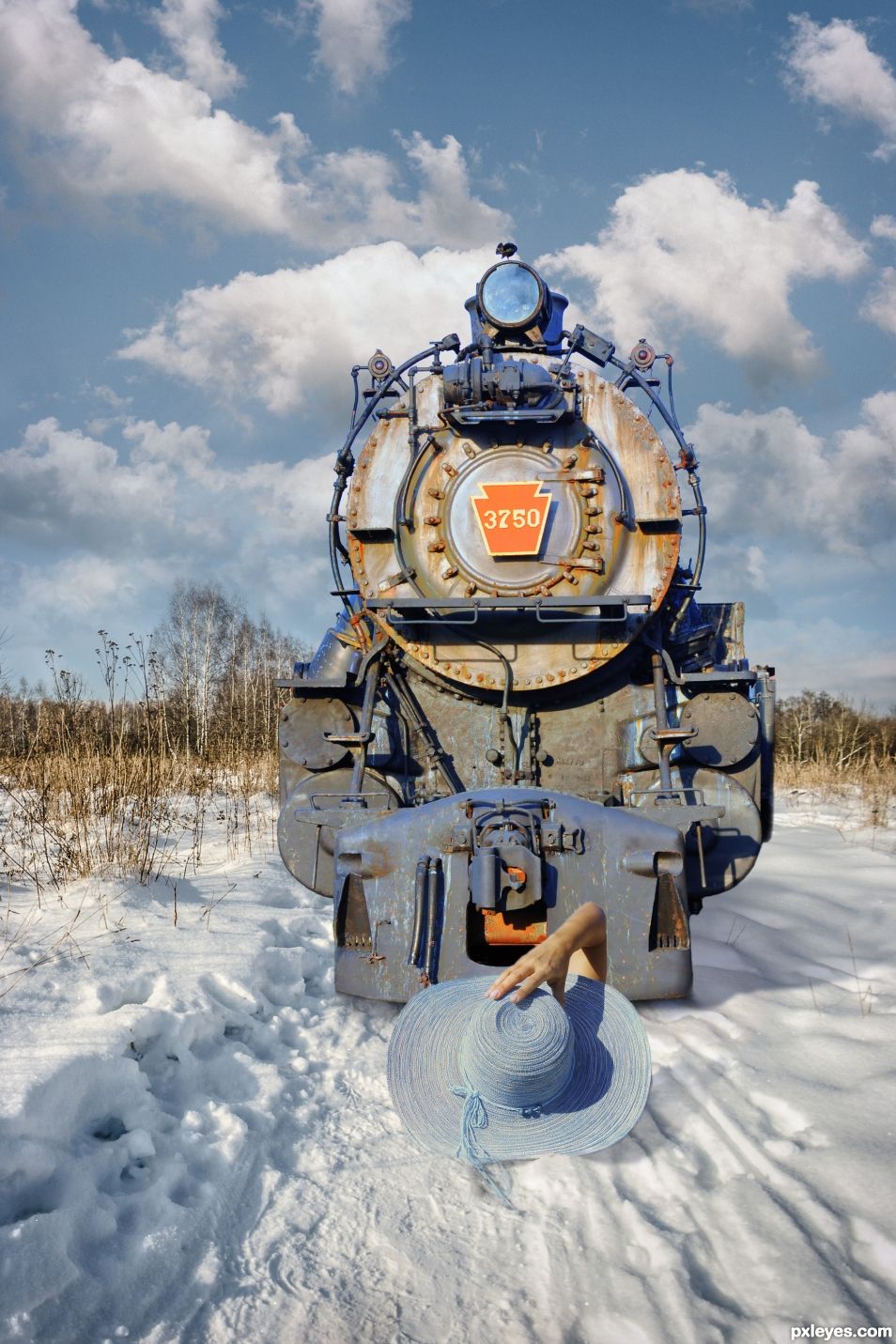 Warning.....Never sunbake on a road in winter. It is not a good place to sunbake. Wrong season for it too. If you do feel compelled to do such a thing, make sure you look out for stray trains which should not be on the snow covered road. (2 years and 189 days ago)

Pretty cool chop. Must have been a pain in the butt to cut out that train.

Thanks BWR. The train was not too hard to cut out using channel masks. Thankfully the sky and the top of the train had good contrast.
Channel masks are great.

Yea I thought about that after I made my post. Good thinking on that technique. Such a time saver. You so smart.

Channel masks say the computer moron?! WOW will have to look that one up. I think this is a smack dab great entry on many levels. The technical is to my eyes very well done and I can see the shadow of hat on snow and it is correct. I also am taken with the colour palette, blue of course is cool and the icing on this well baked cake is that hat and arm....huh?! OUTTA place or what?!

Thanks Olga. If you are unsure about channel masks, check this tutorial....
https://www.youtube.com/watch?v=KX4FaF6QNYM
Channel masks work best on images with good contrasting areas.

Hi, have just tucked that link into my Angelica folder...thank you.

This was one of my faves. I thought you did a great job compositing this. 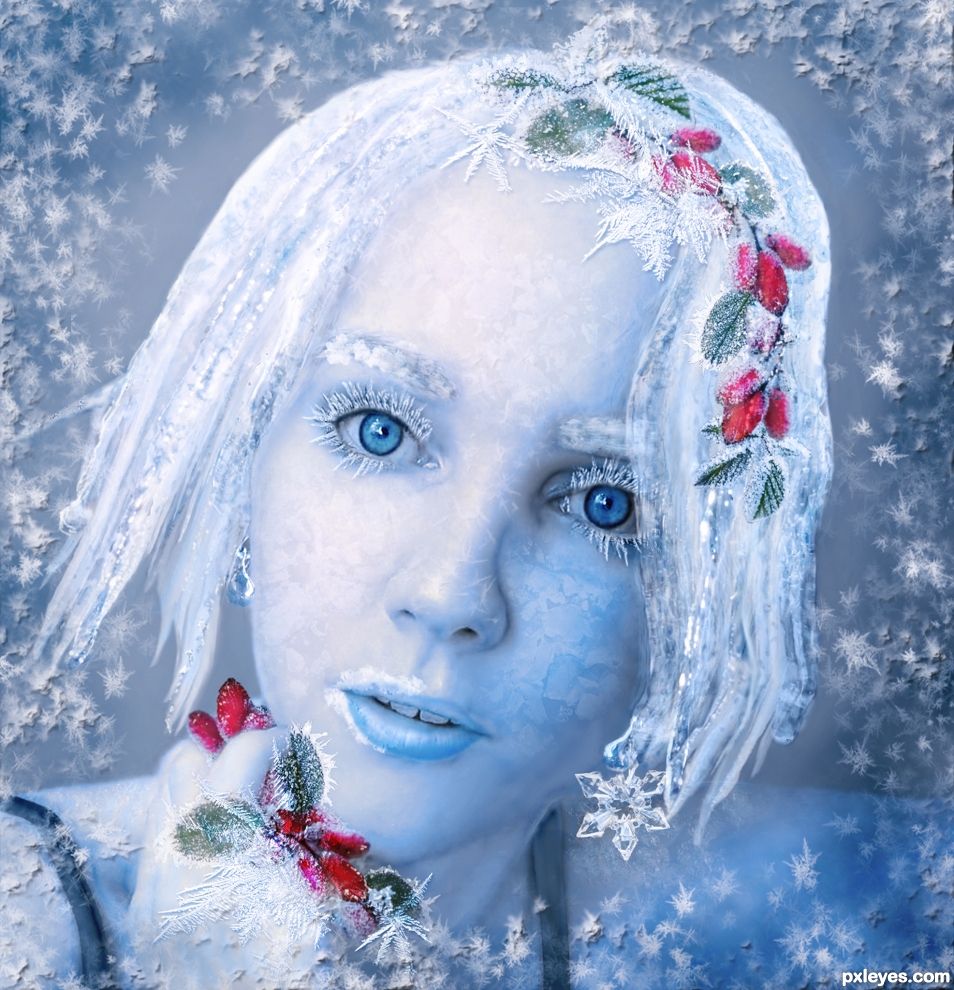 The process used was mainly cutting out parts of sources, adjusting sizes and colors and warping some parts into shape using puppet warp.
Masks, layer effects, glow, subtle drop shadows on some snowflakes, emboss, and various blending modes were used on different layers.
Some parts are painted using the source brushes and others are painted using the brushes which come already installed with photoshop.
The background is just a gradient layer fill with an overlay of a "render clouds" layer.
(2 years and 356 days ago)

I didn't enter this contest because it seemed like such a boring subject to me. But damn did the artists do some fantastic work! This one really amazed me and was (I think) the highest rated chop I ever voted on. It's amazing what this program can do, and it's amazing what you (yes you author) have created.

Wow Thank you very much BWR. I consider that extremely high praise from you.
I am honored.

Mahalo to you too seestah.

I am especially taken with your notes which really help out newbies to photoshop. I love everything about your work but I did not warm up to the coloured in aspect...but that is a truly subjective opinion on my part. Your work is always over the top perfect.

I appreciate your enthusiasm though. Thank you.

No one is in the 90% range. Your scores only reflect the votes, which are sometimes unfair and do not represent your real qualities. Your work is more on the over the top quality side than on the average side

What Zizounai said is spot on.

Thank you Sylvie, Olga and BWR. I appreciate your encouragement and high praises.

I think it's a typo, or I was high chewing magic mushrooms. I meant the red berries in her hair or rather red berries in general that's all. See, Sylvie, BMW and I all think your work is wonderful...and three of us cannot be wrong.

Chewing magic mushrooms? LOL. You are hilarious. Whether people like the red berries or not is subjective for sure. I love the frozen red berries and left them red deliberately for contrast. Making them all blue, just looked too boring to me.

Congrats....I liked this one a lot 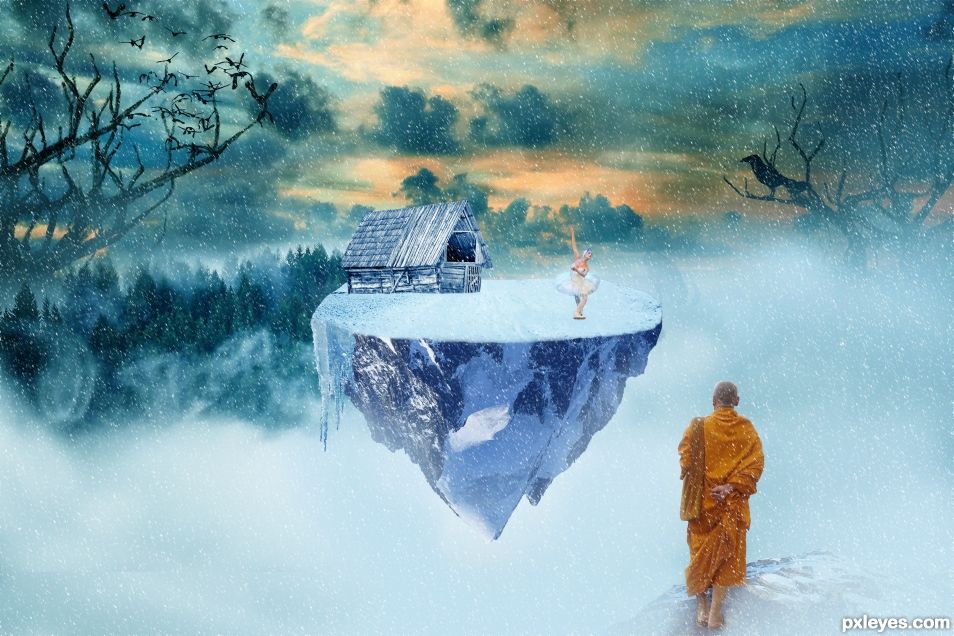 Could just be a big rock...we can't see if it's floating or not.

I hope its better now, thanks for feedback

Very well done, it looks well like an island now! You should just erase the cutting tracks left around the dancer. They are very visible in high res.

Is the monk secretly in love with the ballerina? Or is he spying on her to learn some moves for the Shaolin Ball? Perhaps she is trying to "woo" the monk with her beautiful dance..

A few suggestions. The bottom of the barn is not blended in well with that snow. Quick and easy fix would be to clone some snow on top of the barn. Just "dab" with a soft round brush to to make high-ish and low-ish points so it's not just a straight line.

That blue in her skirt-thing is distracting. A quick fix would be to Clip a Hue/Sat Layer and adjust the "Lightness" of either the Blues and/or Cyans to make them more white. After that, make sure the Adjustment Layer's Mask is all Black to hide what you just did. Then paint white on the mask where the blue yucky stuff is. Now it's all gone. Also as Zizounai said, there is a bunch of residue garbage all around the girl. It shows up when you are zoomed in.

In my opinion her skin is too warm so you may want to give it more of a blue tint to reflect the "Coolness" of the snow scene. Perhaps a Cooling Filter, masked only to her skin, would be easiest or however you see fit. There is too much black under her foot, and when you cut her out you missed a nice chunk between her knees.

Besides that, it's a pretty cool fantasy scene.

nice idea... different to the norm, WD ,,, would've scored higher if it didn't have the telltale 'cut-and-paste' look, try softening/feathering the edges of your montage elements (just by a few pixel) you'll be surprised the difference! Pix xx

Rudolf in the Snow - created by BWR 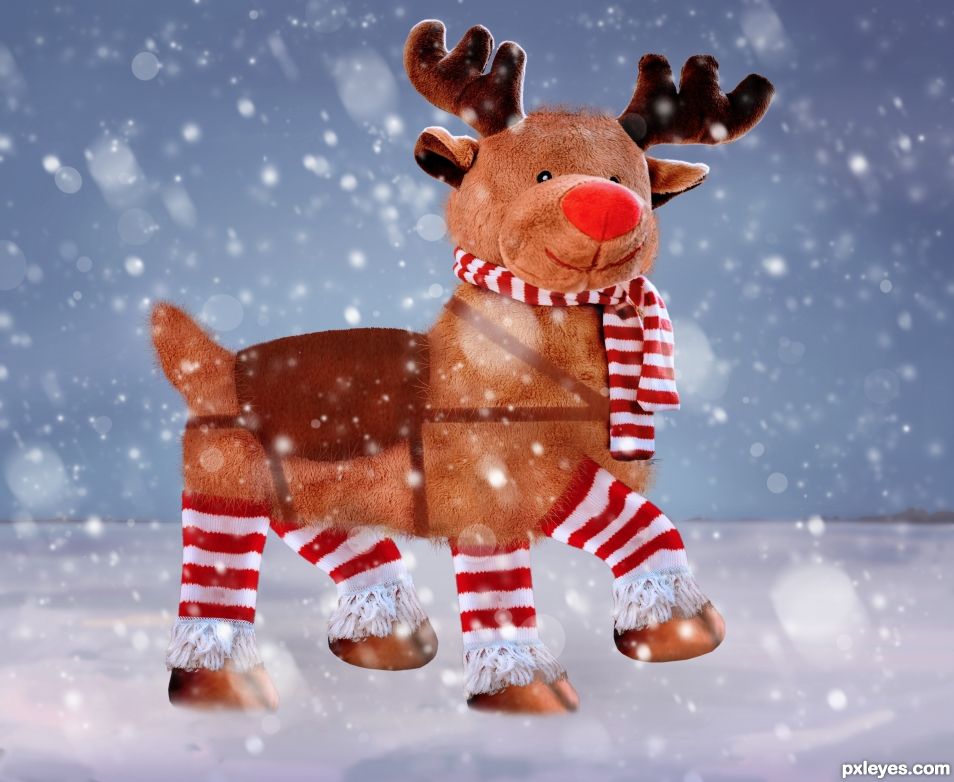 Background was round brushes with some of the built in "Splatter" brushes in PS. Mountains are again round brushes that were blurred. Sky is also brushed. Snow made from several layers of white brushed circles. Some have Gaussian Blur. Some have Motion Blur. Some have both. Rudolf was made using the stuffed animal from the source. Rudolf\'s socks were made from his scarf as well as that "frilly" stuff on the blanket. The saddle/harness was made using the brown chair back on the left side. The built in "Hair" (or grass) brush was used for masking as well as some of the Splatter Brushes for the feet. Hope you like it. (3 years and 65 days ago)