The Tempest - created by arca 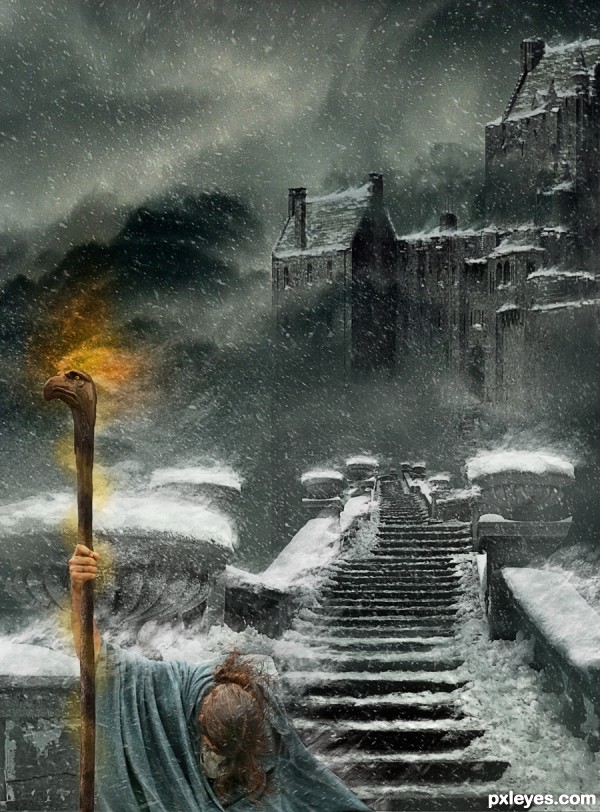 He had no choice, his magic had been outlawed and he had been banished from the Castle. As the blizzard raged about him the sorrow at leaving his home and family was overwhelming. Not knowing or caring where he could go or what his future might bring, he hung his head, weary beyond words; and his journey had only just begun.

His staff would sustain him, giving warmth and light but even it's magic could not diminish his sorrow or the tempest in his soul.

Castle, Sky and Eagle head on Wizards staff are my own photo's. See SBS

EDIT: Replaced staff and added my own image for top of it. Added light coiled around staff. Lightened Wizard and worked on lighting for him (darkened right side - lightened left) (5 years and 1757 days ago)

I have changed the lighting on the wizard (darkened the right side a bit) and softened the glow of the staff (not too much as it is a Magic staff). I do not want to flip him as it would change the composition.

I am not too sure that the lighting is off that much as the castle is quite high and there are a lot of clouds. The lighting can be quite different on both subject because of that

The foreground figure is pretty indistinct. Otherwise this is a lovely moody image.

Hey Bob ...thank for the comment/critique ...I sort of wanted him like that but after looking at the image on my work computer (darker screen) I lightened him a bit. Hopefully he stands out a little more now.
Thanks!

i like the dramatic story of this piece of art...

I now realize: you're a LOTR fan, righ?

The attention to detail is just incredible! Fantastic work author.

Author...you astound me. Truely great talent you have. I'm starting to recognize your work, and i am always impressed. This one is goin to my favs. Beautiful work!

Thanks so much for the wonderful comments and favs. This was a troublesome manip ... your thoughts make it worth the effort.

(I have only read the books 10 times or more) but then I like that genre of fiction. Only thing that comes close is SF.

Love the story, sounds like a great beginning, also great art work, my fave in this contest =)

What a lot of work - fantastic image! Love the eagle's eye.

Congrats Arca, a beautiful piece, love the story too

Congrats for the first place.. great mood and result..