In The Cards - Photoshop Contest [7 entries]

Home » Photoshop Contests » In The Cards 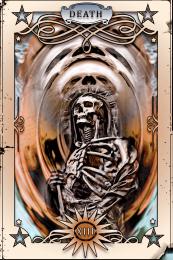 Tarot cards....compelling, mysterious, hocus-pocus, or just plain silly. Whichever way you view them, the artistry is always interesting and unique. Your challenge is to create a scene that depicts one of the 78 different tarot cards. Here is a link that lists them all.


Status: finished. Check out the winners below!
Suggested by: photogirl723 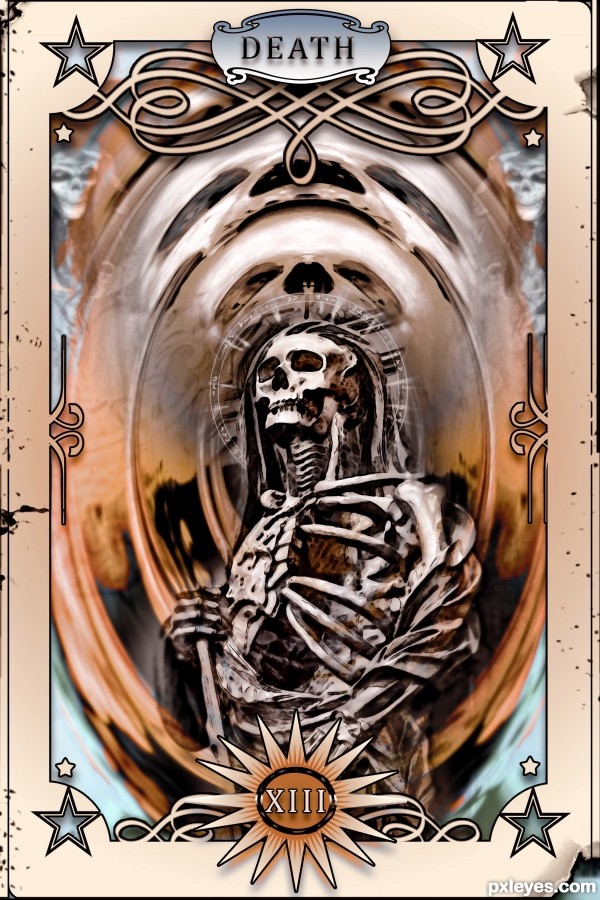 I think this would work, well done.

Congrats, ozi! Now can I see the rest of the deck?

Not a bad idea

The Devil - created by rturnbow

Home » Photoshop Contests » In The Cards » The Devil 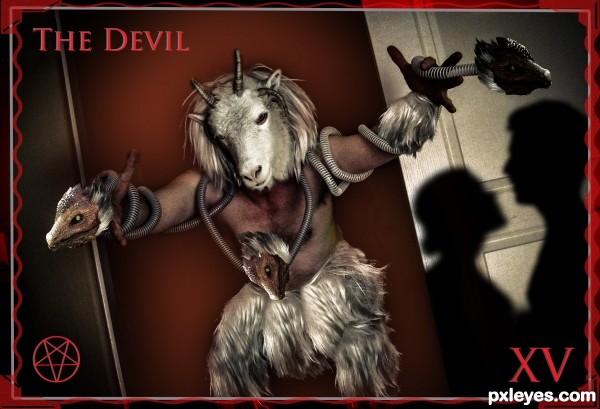 The Devil is another of the popularly misunderstood cards of the Tarot, perhaps second only to Death in this category. In our modern world we do not like to think that there is a seed of negativity in everyone, so we assume that anything bad that happens must be the work of some outside Devil, who is to be feared and shunned. But really, people do not do bad things because a force outside them is controlling their actions. They do bad things because the negative part of their own personality is expressing itself. To deny this side of yourself is to give it power over you, and to give it free reign over your life will eventually destroy you.

The symbolic portrayal of the Devil in the Tarot is a clear mockery of two previous Major Arcana, the Lovers and the Hierophant. The former parody is perhaps the more obvious. Where the angel hovers on the Lovers, the Devil stands on his card, cursing the man and woman rather than blessing them. They who were once connected to each other by love are now attached to the Devil by their chains of lust and ignorance. The Devil's hand mimics the gesture of the Hierophant, but perverts it. The true Hierophant offers spiritual wisdom and beckons to us with an open hand. The Devil's gesture hides his true intentions of hurtful wisdom - not really wisdom at all.
(5 years and 922 days ago)

Nice! The picture in SBS step 2 is brilliant.

You have really creative ideas for making the photos that you need for your photoshop art!

So kind and much appreciated!

Dear author, I love your creativity making your own photos to provide the sources for the contest. Must say that this Devil is with a sweet expression... I like your concept... GL

Thanks for the kind words!

True, it is creepy, that's what I was going for in this one. 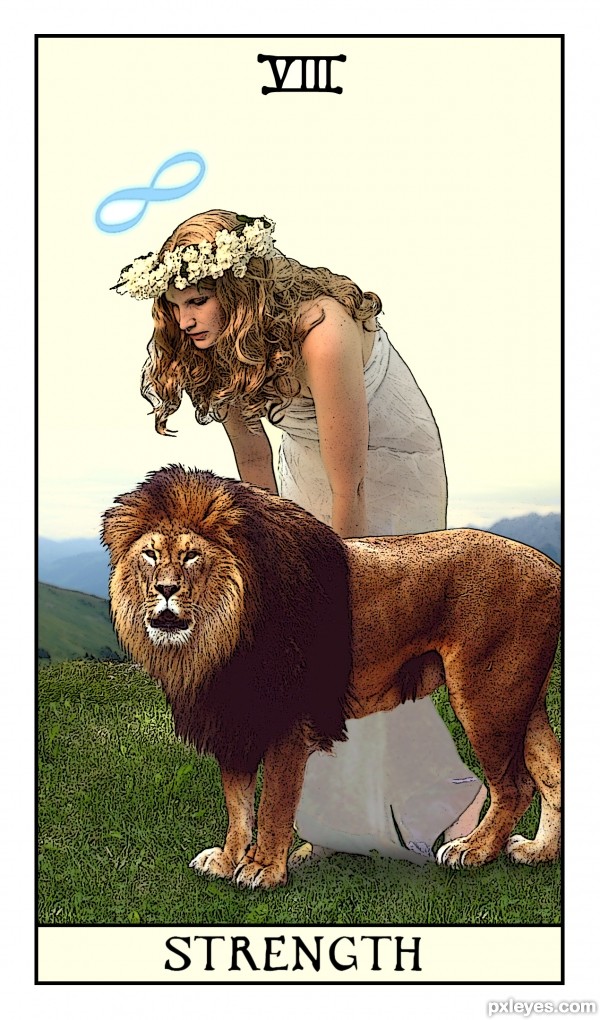 The symbology of the lion is common to Strength, and aptly so. The lion is the "beast within", the raging inner desire inside every one of us that must be controlled or it will be set free to manifest in the world. The image of the woman opening the mouth of the lion shows both courage and patience; she must not fear the lion, and she must wait for it to tire before she can exert her own will upon it. This is not an image of compassion in any sense of the word; how can forcing a creature to obey your will be seen as compassionate? Forgiveness and nurturing are likewise not to be seen anywhere in this image. There is just the purity of the maiden and the power of her inner beast that she is attempting to control. (5 years and 921 days ago)

I like how you matched the card ,,, the work with posterized look was nice choice,,,Just do not like the fact she is looking at ground ... great job ...good luck

This is the way cards should look.... good work my friend.!

Thanks! Gotta try that some time. That's what I love about Photoshop...there are so many different ways to do stuff!

I am not big on artistic effects filters but this looks pretty good for this contest. gl

Ace of Wands - created by sjsmiuk

Home » Photoshop Contests » In The Cards » Ace of Wands 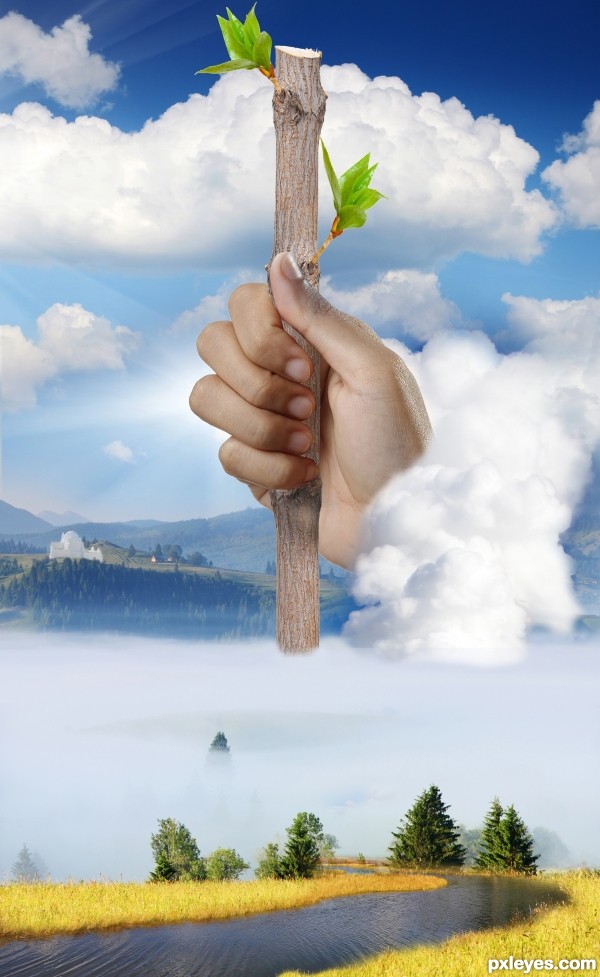 The Ace of Wands is the initial burst of creativity and outpouring of energy that energizes a project and inspires people to greatness. This is the spark that starts the fire, and though it cannot tell us whether the fire will burn brightly or fizzle out, its power remains. The symbology of the castle and the river on the Rider-Waite variants tells you that the Ace of Wands is like a torch that can guide you to success. However, you must be willing to carry the torch with you as you travel along that winding stream to happiness. The Ace cannot tell you where to go, but it can light your way so you can make the correct choices yourself.

The Ace of Wands is a good card to see when you are considering a new project that requires speed and boldness. Its appearance is a sign that now is the time to act to achieve the success you desire. You have the skill to start an adventure, and the potential to see it through to its conclusion, whatever that may be. In addition to adventures in the material world, the Ace of Wands can also refer to the start of a pregnancy or the birth of a child. Since the birth of children is the ultimate demonstration of creative power, it makes sense that this event is ruled by the Wands suit.

Wands are also the suit of health and vitality, and the Ace of Wands often brings with it a wave of fresh power and initiative. Old illnesses can just fall away under the light of this card, and the boost of power you get from that should be used immediately. If there is something you have been wanting to do, but were afraid, now is the time to feel the fear and do it anyway. You'll find it much easier to complete the things that you have to do and get to try some of the things you've been wanting to do. Enjoy every iota of the Ace of Wands' energy.

The one drawback to the Ace of Wands is that its force is very unpredictable, and it cannot really be controlled. Like the Fire element it rules, the Ace can sometimes be used to help us, but at other times it rages out of control. And this energy cannot be invoked magically; either you have it or you don't. But those who do have it live life like no other, because they have enough confidence and fiery energy to see them through any battle. Whenever the Ace of Wands appears for you, seize the opportunity and use its energy to your highest benefit. You can achieve whatever your Will desires. (5 years and 922 days ago)

Ace of pentacles - created by CMYK46

Home » Photoshop Contests » In The Cards » Ace of pentacles 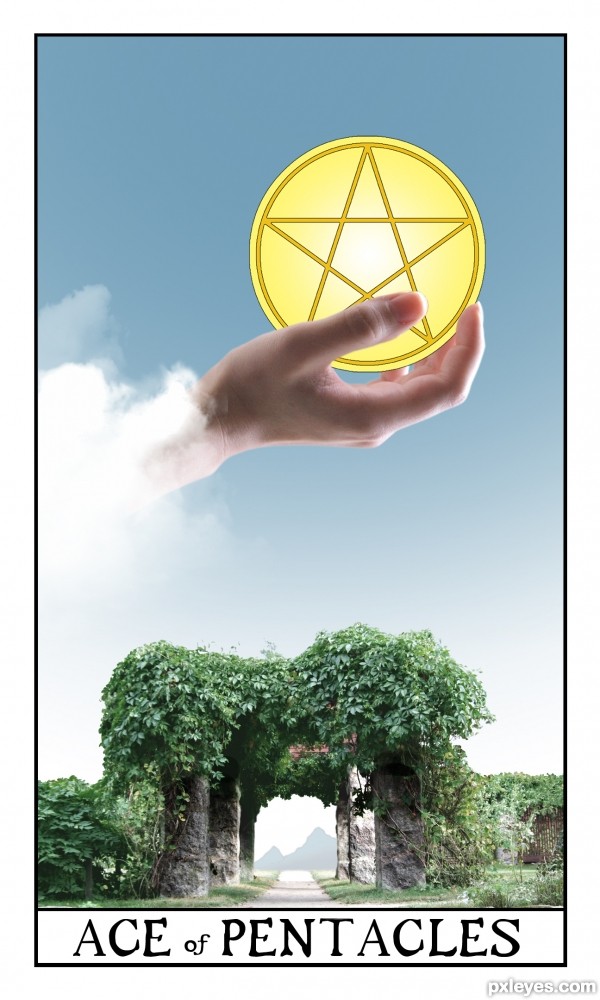