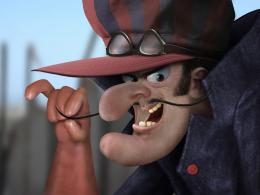 Bugs Bunny, the Smurfs, Tom & Jerry, Homer Simpson, Eric Cartman, Peter Griffin, Stewie,... : all kinds of cartoon characters that made millions of people put a smile on their face for the last couples of decades.

All these cartoons were drawn, and your goal in this contest is to make them "alive", a depiction of how they would look like in real life. You can only use photos to achieve this and you can only pick out animation cartoons which are originally made in 2D/drawn (so no 3D cartoons allowed). The photo-transformed cartoon can be from the old animations or from nowadays, as long as they look like the original ones, as much as possible.

Not sure what this is all about? Check out Homer Simpson alive, by pixeloo.
Good luck!


Required level: 5+ or higher.
Status: finished. Check out the winners below!
Suggested by: wazowski
blaine2nd: Aren't there copyright issues with this one? ( 5 years and 2633 days ago )
frelbow: Cool idea! ( 5 years and 2632 days ago )
Contest Moderator: Exceptional for this contest, copyrighted images are allowed as reference. ( 5 years and 2632 days ago )
arca: Does this have to be a "movie" cartoon or can it be a comic strip/book cartoon character? ( 5 years and 2631 days ago )
wazowski: @ Arca, I mentioned 2D animation characters, because they mostly are "simply" drawn. I know that there are also "simple" comic book drawings, but wouldnt know where to draw the line between simple and complex drawings. All this, because my idea is to make a character 3D "real" (as in, real hair, real skin, real lips, but all in style of the animation drawings), based on something simple 2D . Btw I use " " for simple, because the lines only look simple, of course it's not easy to design and animate such character

( 5 years and 2631 days ago )
jadedink: can there be more than one character in the chop? ( 5 years and 2629 days ago )
Drivenslush: Do we have to use Photos? or can we draw it directly out of PS (like a DD challenge) just asking

( 5 years and 2628 days ago )
langstrum: This theme was used in Worth1000 contests several times and I think it might be helpful that we take a look on them before judging our contest entries on the creativity and execution: http://effects.worth1000.com/contests/21525/reality-cartoons-3 http://effects.worth1000.com/contests/19342/reality-cartoons-2 and more, you can find them in the bottom of the related contests. Also, that's the good references on how a cartoon characters can be transformed into reality. ( 5 years and 2628 days ago )
wazowski: @ D-slush: Mainly photos, perhaps some retouching with PS drawing, but drawing all wouldnt make much sense for this contest, because I wanna see cartoons with real skin, eyes, etc. @Langstrum: THere are some funny ones there, also some less funny... @J-dink: Sure, go ahead! ( 5 years and 2628 days ago )
jawshoewhah: I'm thinking the best etries would be those cartoons that are actually human but there's some pretty good entries so far. ( 5 years and 2628 days ago )
gopankarichal: In this contest humanization of the cartoon character is allowed or not? If the character is originally human there is no problem. But I found some entries used human look for the cartoon characters, originally it is not. As per the contest goal making them alive is the task.I need a clarification from wazowski or from the moderator. ( 5 years and 2628 days ago )
wazowski: Although I'm not completely sure what you mean with humanization, the idea of this contest is that you make/rebuild a cartoon character, using real pictures as texture (for skin, hair, eyes, clothes, etc) but trying to go as close in drawing style of the original character. See the link of Homer as good example 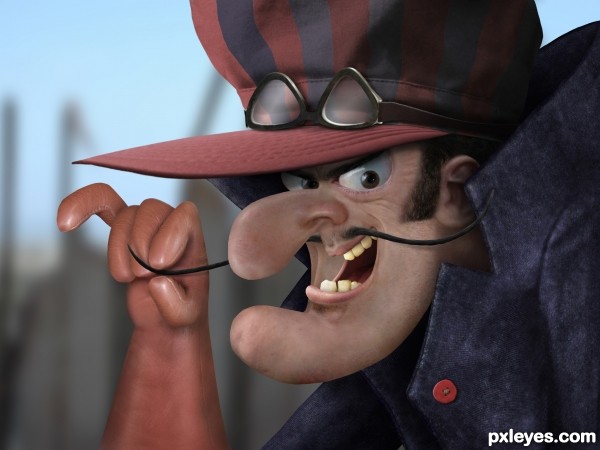 WOW!! THis is impressive!!! waiting for sbs

Author, except for the goggles, this looks exactly like your first entry that used copyrighted images. I can't see where you've used the new sources you've listed.

Reserving my vote, really need to see a sbs for this . this is VERY well done but I also cannot see the sources in it.

CMYK46 http://www.pxleyes.com/photoshop-picture/4ca3b3cd8dc28/Dick-Dastardly.html look closer i changed every bit that the copyrighted images used. the coat the button the end of the chin the side burns the hat. most of the face was made from the other sources already listed in the comments section of the first entry

really want to know how you do this, its super and for sure i will learn from this if u are so kind and provide sbs, and i say thys becouse i saw the source files and i have no ideea where and how you used ! good luck!

congratulation, author for me this is one of the best work here on this site, good luck!

I think this newer version works even better than the older one, because now you see more the type of fabric for the coat. Welldone result! Good luck!

Things are more clear now with the SBS...GL author.

Am glad you changed the sources!! would have sucked if it got pulled!! - GL!

Very very good job author...i waited for Sunday to vote on this,and i like it so much...Well done and keep going to create entry's like this...

congratulation u deserve it !

thanks everyone for the votes and nice comments

Congrats!!! I thought I had commented on this before but I guess I was speechless when I first say it. Great, humourous and wonderful creation. He is a marvel!

thanks guys.. lol arca thanks alot .

Congrats, it's well deserved the place

I knew I liked this one! Congrats! Bravo! 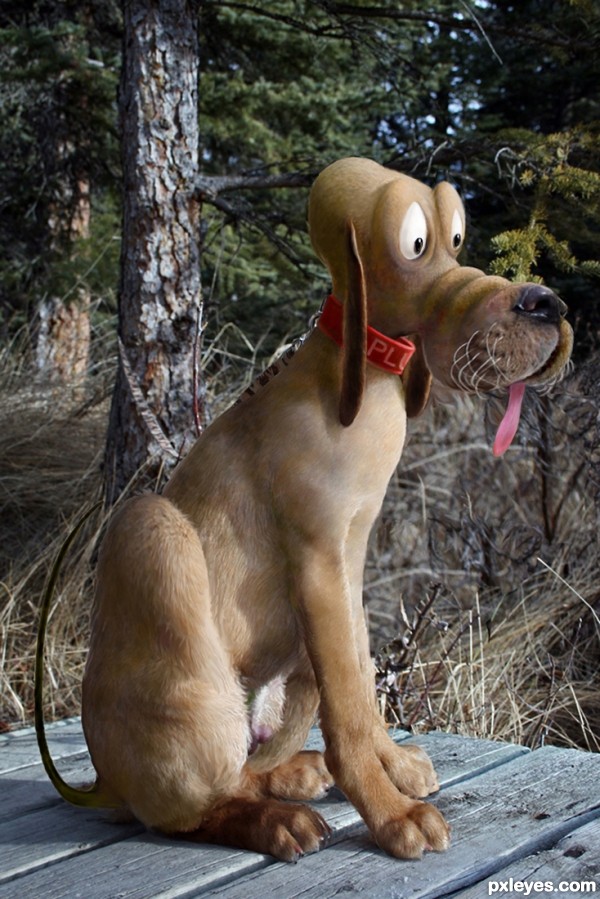 EDIT: PLEASE LOOK AT THE SBS so you can see the original Eyes.. they are awesome as well

. If you could make his ears and tail darker and perhaps his eyes a bit bigger (more oval), would be nice. Good luck!

Pluto has large white eyes with small black pupils...otherwise this is well done.

Sorry I did this from memory, so I corrected the eyes and darkend the ears, hope it looks better.

Overall really nice! The only thing I would work on would be the tail and the halo on the bottom of the dog. Top chop, good luck!

LOL ... this is wonderful, amazing and downright hilarious. Gotta love him! Good luck ... he is perfect!

Great job author...i adore Pluto so much....i had idea to create Scooby Doo but your version of another famous dog is perfect...well done and Pluto goes directly to my favorites...

thanks to all for the votes !

congrats on top 2nd i realy like this one 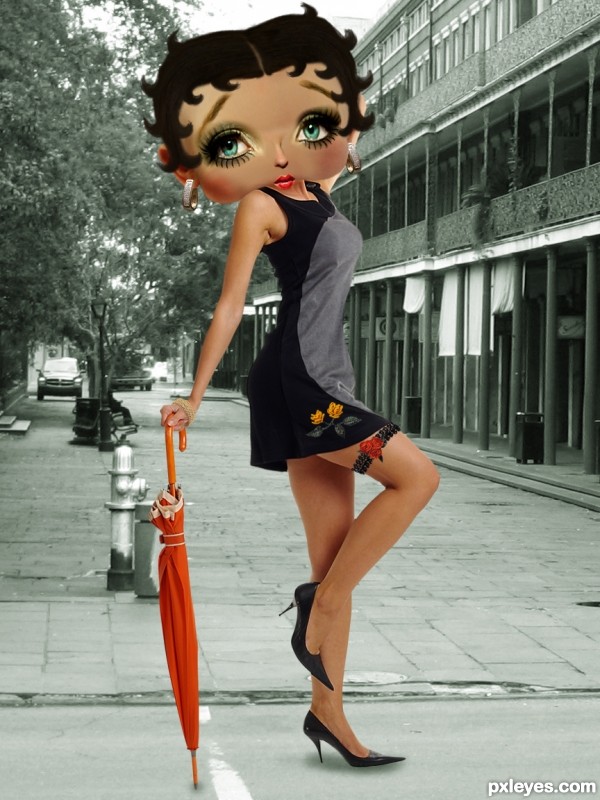 You could find a real face and distort it. That's better because the skin on the face now is not fitted to the real body (but the eyes, nose and mouth are good). Also, her "decorations" could be replaced by the real things, it will be much more convincing. Still a good entry and eye catching, good luck

EDIT: I didn't know it's you

Nice job on the face, if you could tweak her body a bit more would make it only better (a bit rounder here & there and perhaps also squeeze-scale it vertically a bit). I agree with the real earrings and bracelet. Good luck!

PS not sure how you made the hair but I'd make it a tiny bit lighter so you can see the shape of the strings a bit better.

woow.. good that it is just photoshop.. :3 it will be very scary to see a real betty

Great use of sources... SBS is also very good!

love the eyes..beautiful !!! love the cute lips too

I think her waist thinner and changed the accessories. I hope it's better now...

I think you could have put a lot more effort into acheiving a more detailed and believable face, right now I think the difference between the head and the body are apparent in terms of realism... facial parts could easily be constructed from your source images to give it more definition and marry up better with the rest of your scene... just my opinion

I really like this one ...not really a suggestion just a thought ... it would be interesting to see her more monochromatic ... the original Betty Boop was mostly Black and White ... she was barely even grayscale. In this case I am not sure how that would work but it would be fun to see it that way and compare the two.

Really great job though and perfect model for her!

Congrats for third place ! i really love it.

Thanks for all the favs, support and comments; it's because all of you I got this place! 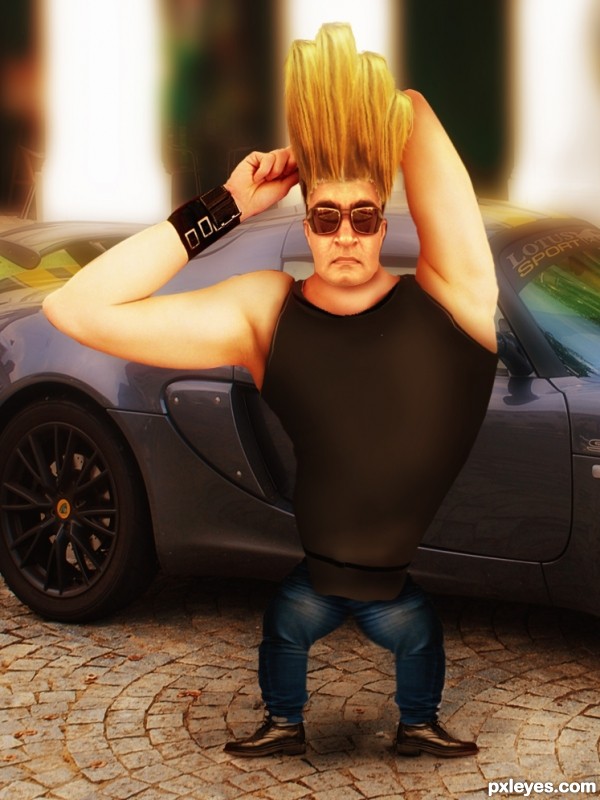 "I am Johnny Bravo, the one-man army!"

Mama mia. That's a spicy meatball.
Do the monkey with me.

Pretty good and funny, but I have to complain about the shoes, their angles are not fitted to the ground

Thanks langstrum, I have fixed shoes

Awesome! Only nitpick is the hair.... (I agree with CMYK.. needs to be more blonde..)

Superduper job in bringing this character to life!

Thanks woodztockr, Made color changes to hair.

so cool and funny... 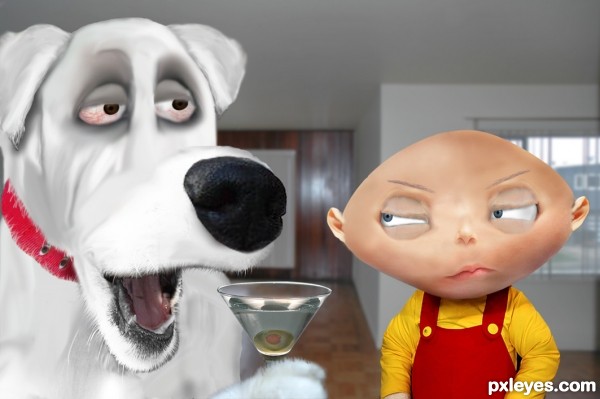 (I think Brian's head is a little more broad, though)

Stewie: Hey, mother, I come bearing a gift. I'll give you a hint. It's in my diaper and it's not a toaster.

In my opinion, one of the best!
Funny and well done
Congratulations, author.