Til Death do we Part... - created by MnMCarta

Home » Photography Contests » Still Life » Til Death do we Part... 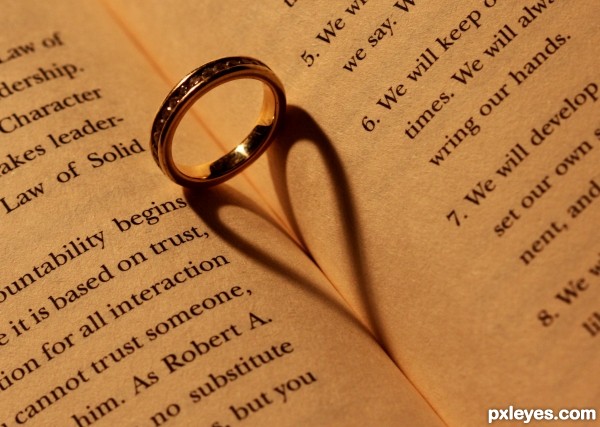 I somehow knew it was you , Great shot !

I like it, but unfortunately I have seen this photograph too many times

Gets a little bit boring and repetitive. In my opinion, we need some more originality.

It may be repetitive but I think it's far from boring bartoszwozniak. Just because we see something repeatedly doesn't mean that it's bad, did you think this was boring the first time you saw it? I've seen this before too but I've also seen 10,000,000 shots of refracted water droplets, and countless sunsets over the ocean but if it's done well than it doesn't matter how many I've seen before it. Yes originality is nice, and needed but can you honestly say you've never seen a photo you liked and reproduced it later? That's all the author has done here, and they did it well in my opinion.

I agree with everything you said Adam, EXCEPT... WATER DROPLETS!!!!!!! AAARRRGGGGHHHH. Anytime there is a theme where flowers are on-topic, water droplets should be BANNED. Violators should be forced to walk barefoot through honey ending up in African Army Ant hills!!!! After the soles of their feet have been eaten off by the ants, they should be dragged by pygmy hippos into a giant vat of red wine vinegar, with hyperactive 4th graders throwing wet kittens at them the whole way. Then, AND ONLY THEN, would they be eligible to show another photo of a water droplet - AFTER ten years probation!

You feel better now Kyricom? LOL
TY Locks. I know this isn't an original but I was pretty proud I was able to do it this time.

Really well done but unoriginal. Well, who cares? The photograph's still amazing and lighting is right on. I can never get enough of these anyways. GL

I don't think there's much left that hasn't been done before - so I guess that makes us all a little boring and repetitive. Oscar Wilde said that Life imitates art. Considering history repeats itself - we are likely to come across a few sunset pictures ... and God forbid, water droplets

I certainly agree with what you and Oscar have said... except for.... WATER DROPLETS!!!! AAAARRRRGGGGHHHHHH!!!!! Shots of water droplets on flowers should be banned by the Geneva Conventions! Violators should be marched through the streets to be pelted by crowds throwing cream pies! After their parade, they should be staked out on the floor of Death Valley in August, force fed rabid Gerbils and made to watch a continuous loop of "Plan 9 from Outer Space!" After they die, their families should be forced to have a large sign in their yard for perpetuity declaring that their loved ones' fate was due to "repetitive overuse of trite stereotypes!"

My goodness! All this talk about originality and done before and such. *I've* never seen this shot before, so if its any consolation, if I see this shot again, yours is the original and all others will have been "done before".