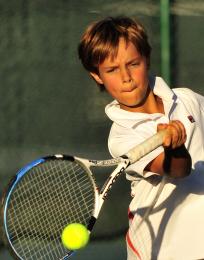 Winning entry, with a score of:
70.9%
By Remsphoto

Show us your best portrait taken during the action of a sporting event. We're not looking for tiddly-winks here. It should be a sport that involves running in some form. This should not be an action shot emphasizing the sport, but an action shot creating a portrait of a player that captures their character. The entire body should not be in the shot... make it from the torso and up with an emphasis on the head and shoulders. Show their determination, concentration, and sweat (as an example). Other people, or parts of people, can be visible, but the emphasis should obviously be on a single person. It's THEIR portrait.

Anyway... here's what I'm looking at in this contest, based on the theme. I think the theme is fairly straight forward with the possible exception of "running" (I'll get to that in a second. This is supposed to be a PORTRAIT, of a single person, from the torso up, emphasizing from the head and shoulders. I interpret the "running" to be that the person should be engaged in a vigorous activity, although maybe not actually running. Just because it's a sport that has running, if it looks like they're just standing there it will be off-theme. Other activity, such as bike riding or swimming could be perfectly acceptable if it meets the other requirements of a PORTRAIT. It is not a shot to show the sport. It is a shot to show the individual. Yes, other people (or parts of people) may be in the shot, if the PRIMARY subject meets the requirements above. I hope this helps. ( 5 years and 1646 days ago )
k5683: Its funny how the descriptions are never clear enough and people get entries removed all the time. ( 5 years and 1646 days ago )
friiskiwi: Nothing funny about it, more of a headache. Very few suggestions are well worded. The Mods usually get a quick look at them, and they may initially look OK, but the authors often interpret the them quite differently (not necessary wrong) to how the suggester and the Mods had read it.
No matter how hard we try, there will always be dissenters.
We will keep trying, until one by one we give up, totally frustrated. ( 5 years and 1645 days ago )
photogirl723: Not to beat a dead horse, but IMHO, there's nothing questionable about the sentence " It should be a sport that involves running in some form." To me, that does not mean swimming, boxing, cycling, etc. If that was not the intention of the contest, then remove that sentence and there wouldn't be any question. ( 5 years and 1645 days ago )
solkee: I think the intention was that it had to be a strenuous sport (We're not looking for tiddly-winks here). It's amazing how people complain when the goals are too stringent and then complain again when they are lapsed to allow more entries. If members would suggest more contests instead of mods trying to come up with something in the last minute there wouldn't be all this whining. ( 5 years and 1643 days ago )
friiskiwi: well said solkee ( 5 years and 1642 days ago ) 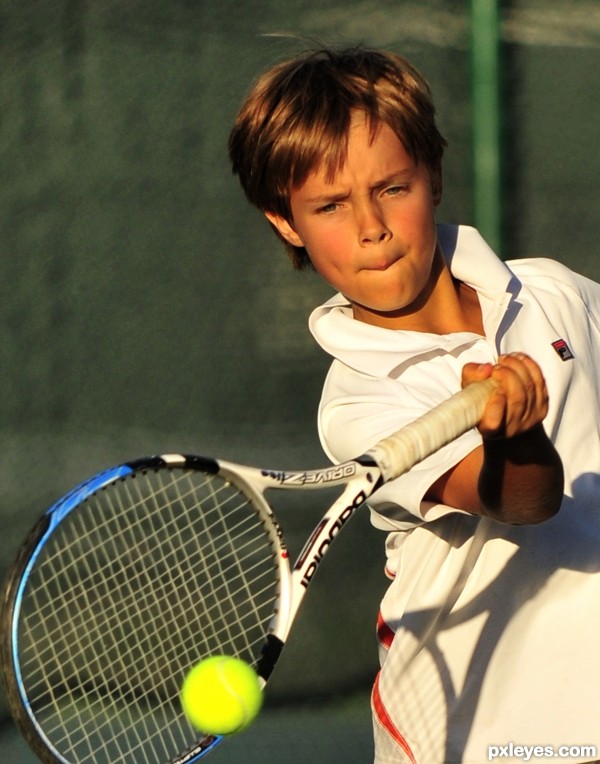 He needs to turn his hand over on the racquet

These kids do amazing things with these new racquets. My old wooden Bancroft wouldn't stand a chance. Great eye on the ball. Thanks for your comments.

Nice action, and his expression is priceless.

Great one ! Both composition and expression are great !

Congrats on 1st and 3rd place, my favourite sport.

Thanks everyone. My favorite sport as well but I never played as well as the kids today. To be young again... 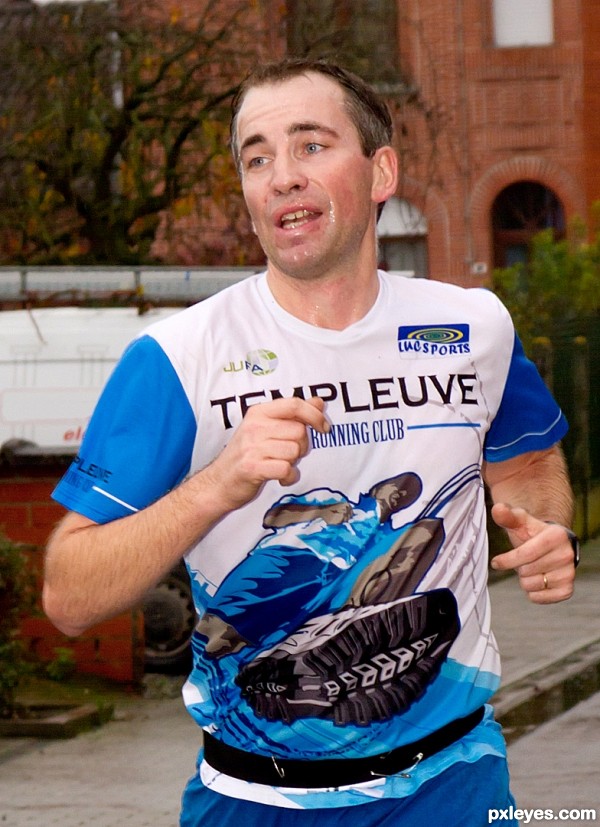 great photo, but no running involved.

You're right sorry, I misunderstood the contest goal. I'll watch for a picture that fits correctly the theme.

Hope this one fits better.

Wow, what an expressive capture... GL

You got it, one of the few photos that actually involves running. great photo. 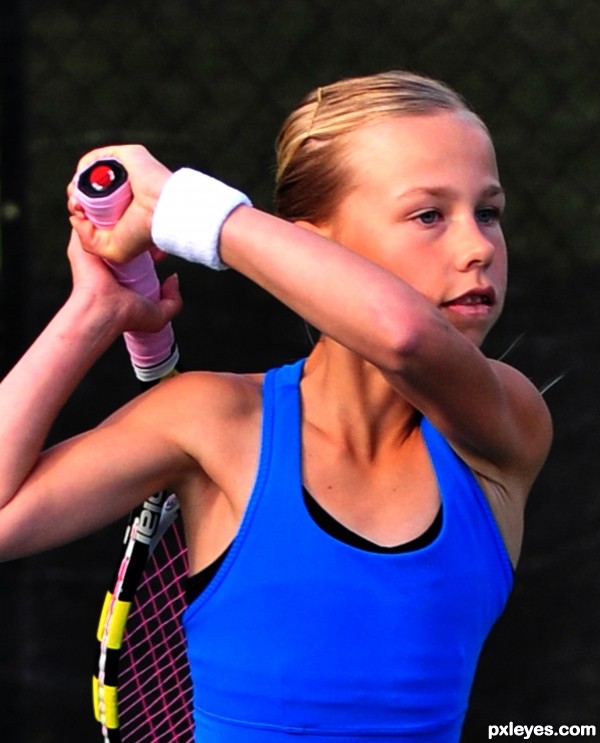 Nice, she seems to be satisfied

Wow, what a great moment! GL

The racquet is almost bigger than she is, but you can see the muscles....and her calm concentration. Nice capture! 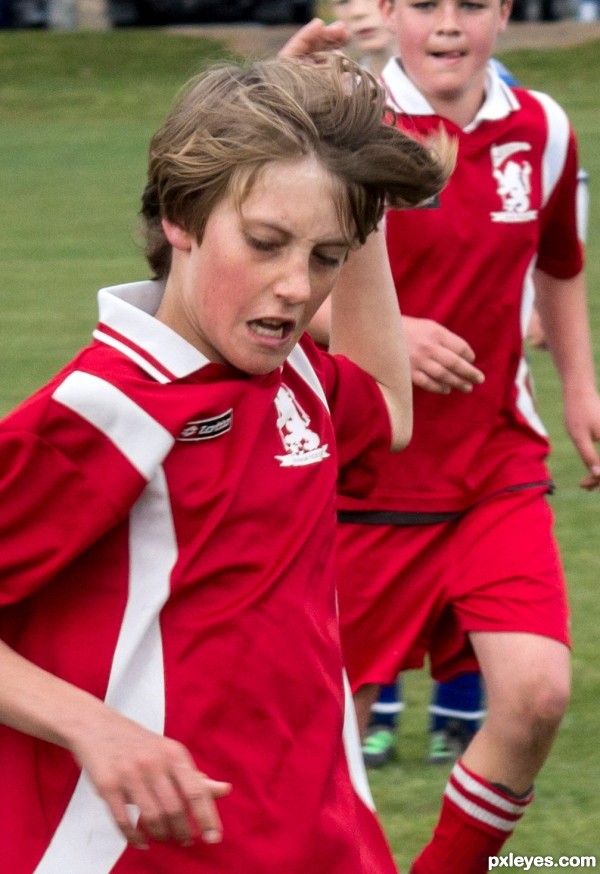 Too hard - created by friiskiwi 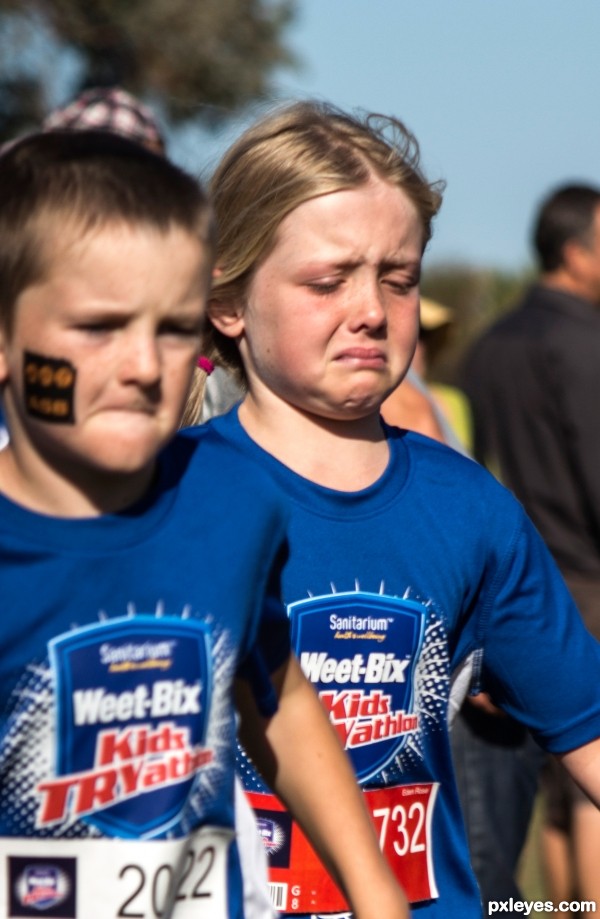 It's part of the sport, unfortunately... a good register...GL

Love that there are 2 very different faces at play here. Where some give in, others dig in. Excellent capture!