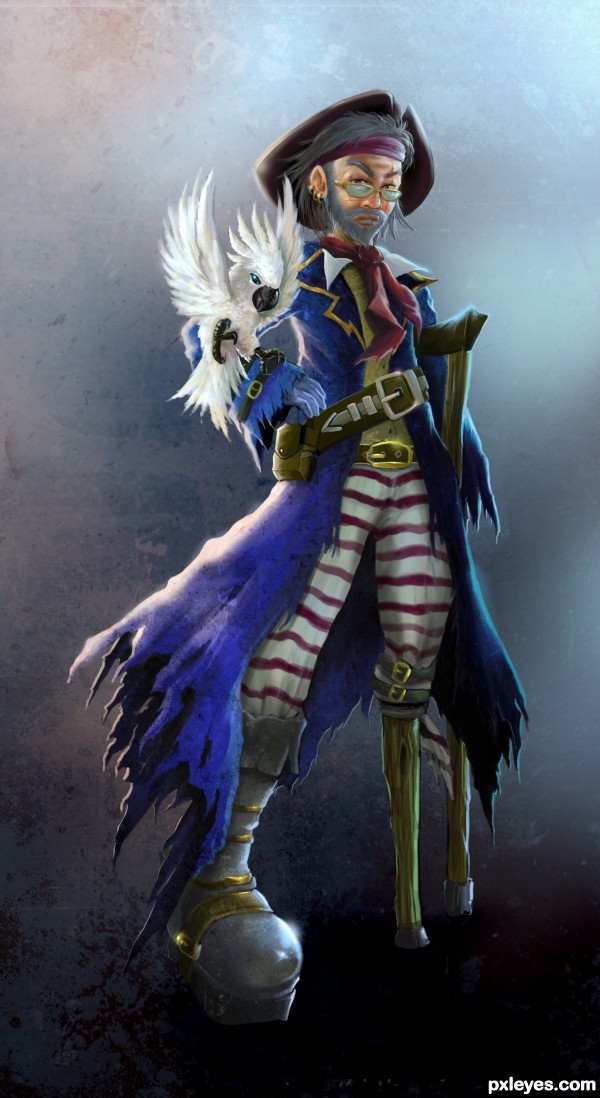 Long John Silver is a very complex and self-contradictory character. He is cunning and mendacious, hiding his true intentions from Squire Trelawney while posing as the shipâ€™s genial cook. He is very disloyal, shifting sides so frequently that we cannot be sure of his true affiliations. He is greedy and has an almost animal nature, caring little about human relations, as we see in his cold-blooded murder of Tom Redruth. Nonetheless, Silver is without question the most vital and charismatic character in the novel. Though lacking a leg, he moves swiftly and powerfully across unsteady decks and spryly hoists himself over fences. His physical defect actually showcases his strength of character, revealing with every step his ability to overcome obstacles. Likewise, Silverâ€™s mental resolve is impressive: he is the only one of the pirates not to be spooked by Benâ€™s imitation of the dead Flintâ€™s voice. He remains rational in the face of his menâ€™s collective superstitions, driving them forward to the treasure site. Silverâ€™s â€œtwo-hundred-year-oldâ€ parrot, which screeches dead menâ€™s words, gives the pirate an almost satanic aura. He has obvious leadership abilities, as he is able to maintain control of his ragged and surly band of mutineers to the very end of their search, through heavy losses and suspicions of treachery.

OKAY, I got it WRONG for Parrot to Cockatoo!! So, I assume it would be a nice 'brand-new' partner concept of this LJS. Done entirely with Photoshop CS5 & Wacom Cintiq. 2 days of work, can't remember the exact amount of time flies.

Thank you very much MossyB for the resource link.

Read an in-depth analysis of Long John Silver at the source link.

Though it was a shame that I created Cockatoo, not the Parrot.

wow, awesome skill Mr. author... I like the cool and warm "rim-light" that you add into.

But I don't have plenty of time creating this since I've got a deadline of my commercial projects coming soon. So, I hope you didn't mind the missing details in some parts.

BTW, it's an angle distortion, so bare with me if the composition a little bit off. I'm not using Poser or any other 3D posing figure right now.

Beautiful render!
The light reflection on the side of the waistcoat, and the "radioactive" light spot on the boot are a bit too high contrast (Less is More!), but still a welcome visual change from all the people who think light shines a very short distance, and stops, with massive dark shadows over dominating their entries...

This is a wonderful characterization, and the perspective skew, while a bit over-exaggerated, helps make the image very attention grabbing.

MossyB, thank you for your comments & compliment as well (at least, I always hope you'll find a great comments like the way you do.)

Hereisanoop & RIPSAW, thanks for taking your time to comment my work & fave it. Really I'm honored. I'll do my best (in between my daily deadlines & health management) to produce THE FIRST RELEASED & FOR YOUR EYES ONLY artworks here on Pxleyes.

Nice work Author, good skills of making a rather blah background rather appealing looking .Love your color choices and soft approach. although the cloak seems a bit stiff with the highlights on the left side your work is a fresh approach on the site. very well done ,good luck.and looking forward to seeing more from you.

Thank you, Glockman. I'm aware of the cloak, the intensity of colors, the contrast of my highlights too, but I'm fully with the deadline jobs right now, can't edit anything properly though. Still, appreciated the taking time of yours, compliments & comments.

Well, we have new, fresh art from you author, thanks for posting your work here at pxleyes, and for giving us the chance to look at something beautifully created. Welcome! and good luck!

Very great work and I like your attitude, author. Glad that you're here with our contests. Your character is originally created, and maybe he reflected your personality, too. I'm with MossyB and Glockman on the highlights. The other thing is I don't see neither 'Alice in Wonderland' nor 'Pirates of the Caribbean', so that will give you a bit less score. Still, you show us one of the best artworks of the site so far. Good luck!!

Thank you very much for your comments & compliments, George. I'll always provide the best illustrations as far as I'm able to create for Pxleyes. So, stay tuned, stay stunned. Lol.

Langstrum, you've got a point to describe the reflected personality (but not physically) of mine. But in addition of NOT seeing the AiW nor PoC characteristic style because I created this person basically from the written concept. I'm more to the contextual visualization rather then to the contest theme. You have my apology if that doesn't meet the theme guidelines (or concept) in any other way.

Still, this is a concept art after all, every concept artists have their own imaginations. But I respect your comments (everyone) to me as my art directors & partners.

So, constructive critiques & comments most welcome.

Thank you for your nice words and votes, everyone. I hope this one got a lot of attention as well as the details to the public.

Thanks, guys. For your supports & comments!