Show faved by others
12next »
26 favorites given: 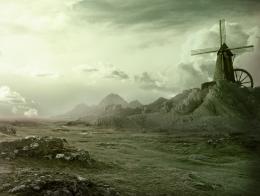 hope its not so dark

while I was working with cogs accidentally I have discovered this illusion.and I developed it .

my previous entry was removed and i was asked to submit it again with the nude parts covered. so here is the censored version of the image. BUT! before voting please visit the following link (only if you're 18+) before voting and vote the original image, and not the black dots. link to origina... 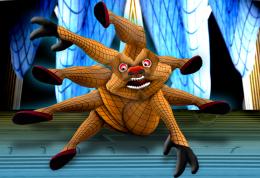 Here is a revised version for the people that said I was out of guidelines. I liked the original better and yes I know it's not likely for a human to adapt to breathe under water. I also know that if the earth was covered completely by water all the existing structures would be useless and we woul...

this is the work i rendered in 3ds max and vray.thanx to cg textures and the morguefile for the textures.

For: free for all contest

used clonining for the texture and brush for highlights , shadow and fluid... 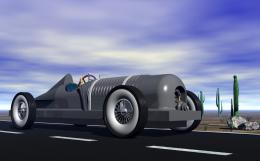 Ok. So this is my first ever 3D thing ever. I had to simplify the shapes a bit because I made the whole thing in Bryce 5.5. Still, I had fun and might try some more contests later. All the textures and objects used came with Bryce. I used this blueprint: http://www.the-blueprints.com/blueprints/c...

Lord Of The Beams

Who else can use these beams better than a dog? 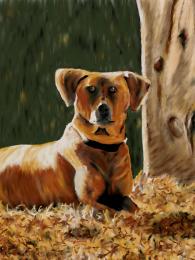 This is my dog Phoenix (a german pinscher). I drew this in Corel Painter using charcoal pencils and a small blending brush.

Old PST entry, nothing but the source.

Thief of art... from source and my picture of a Ceiling

I liked the idea of a tiny dwelling on the water. The man is from my photos. The canoe is public domain. Thanks to knubie via stock exchange for the hut, and thanks to Aka via wikimedia commons for the dragonfly 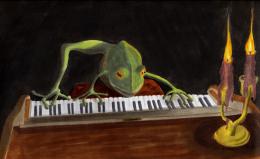 This one was done this morning before my medication.... usually I wouldn't explain what's going on in my mind, only to a therapist, but this time I'll make an exception. Our Semi-Hero birdman sees and hears the souls of the asylum inmates, he wears his glasses to fog the sights and bangs his symbols...

Needle in the Air. 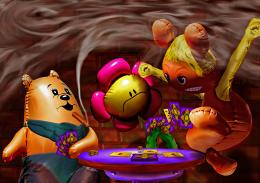 "You!!! You bloody little cheater!!!" * no external sources.

source my own, see SBS.

For: merry go round contest