Mirage of the Ancient Top Hat - created by pearlie 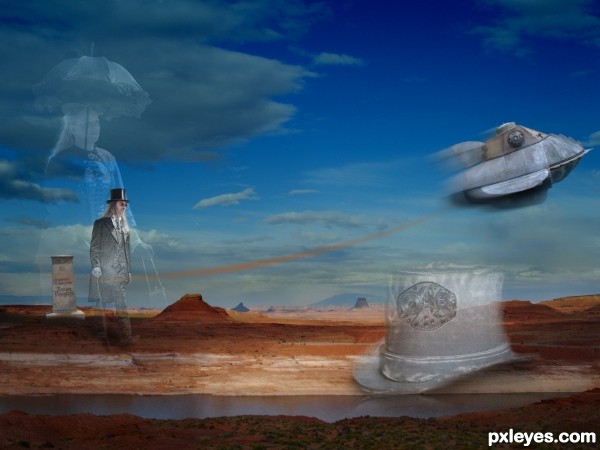 From Wiki: "Gentlemen began to wear the top hat at the end of the 18th century... and developed from a fashion into a symbol of urban respectability... The top hat is sometimes associated with the upper class, becoming a target for satirists and social critics. It was particularly used as a symbol of capitalism in cartoons in socialist and communist media, long after the headgear had been abandoned by those satirized. It was a part of the dress of Uncle Sam and used as a symbol of U.S. monopoly power. The character Rich Uncle Pennybags, who personifies financial monopoly in the board game Monopoly, wears a top hat."

Here we see a descendant of Rich Uncle Pennybags. Keeping the memory of his dear departed wife, Penelope Pennybags, in his heart, Milburn Pennybags has spent all his "pennies" on the finest transportation of the day in search of his own fortune - which turns out to be just a mirage. Like discovering that the real Wizard of Oz was just an ordinary man playing with illusions, ol' Pennybags finds the top hat is just a mechanical device of an ancient civilization, supposedly used to control the minds of the populace, and left to decay in the sands of a distant land. Oddly, Milburn's adventure is also an illusion, just a figment of his imagination. (5 years and 2173 days ago)

the top hat... the black and white dots all over it. either you placed a dissolve blending layer to it (never do this) or you rendered a noise layer (do this) if you did the dissolve blending layer, then remove it and make a selection of the hat and render a noise to a new layer. With this new noise layer, use a Gaussian blur on it to match the blur of the hat. Use the "Opacity" slider for the noise layer and reduce the opacity to about 75%. Try a few different blending layer options to it... most likely "Overlay" or "Multiply" will yield the most desirable results... good luck!

It is noise, bjaockx, and was tweaking it when I saw your comment, had tried levels but that really didn't work. Your suggestion of blur and overlay has worked the best, thanks very much! Was going for the 'beam me up' effect, I think this is better.

I like it, cool peace of work. That hat and gears look purdy good to me. 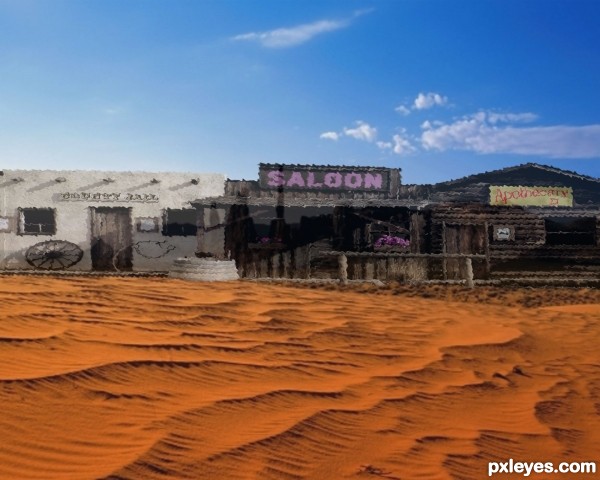 Source image made me think of the old west and getting lost, with the sun pounding down on you. (5 years and 2232 days ago)

Student soldier in my acting class had just returned from the war zone, and in a monologue exercise he told a funny story about finding a single M & M in the bottom of his back pack and how much it reminded him of home and was laughing how a little piece of candy made him happy.. then his voice cracked and tears began to stream from his eyes.. he didn't cry, he was too strong, but he sent the class into weeping...

I couldn't reflect that feeling in this chop... but it's the story that inspired it (5 years and 3088 days ago)

reminds me of a walk i went on yesterday with some friends... we ended up walking for about 2 hours aimlessly because we got lost... great ideas

Interesting shot. The shape of the shadow would be skewed more based on the angle of the billboard. The shadow is in the right direction though...so kudos to you for noticing the light direction.

great synopsis with your work. GL

Sometimes it's the back story that counts! Good luck.

Great, maybe the merries in the distance are made a bit to small.

These are the moments in life, where not the big things are important, but the small things, that can fill the little hole in your heart. Beautiful inspiration and idea. Good luck

is it hovering??? lol