Libellule and Firetail - created by arca 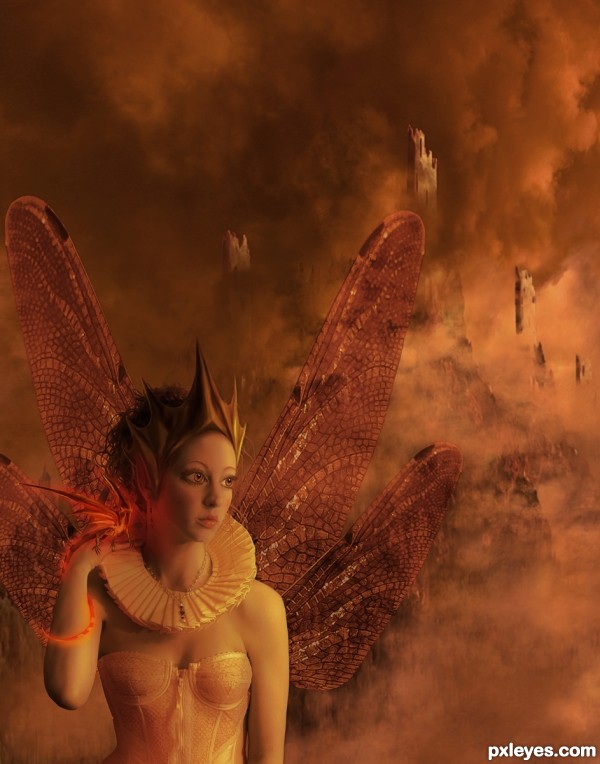 Queen Libellule and Her companion-dragon, Firetail ... dreaming of far-off places and worlds of green and blue.

Full view is nice and Step 4 in the SBS is an animated GIF .

Thanks to lockstock (from her Elizabeth pack). All images but the figure are my own. Any brushes used are stock PS or created by me. See SBS (5 years and 2377 days ago)

Wonderful job wings are beautiful along with everything else

Totally awesome with great composition (Rule of Thirds) and enviable complexity in construction. The little dragon is the weak point IMO. I wish the coolness of its tail extended to its body which seems more cartoon than realistic. Also, the dragon appears to be lit from the left while she is lit from the right.

Thanks for the suggestion Dan. I tried to make the dragon less cartoonish; added some texture to the wings, sharpened the whole dragon a bit and added the same glow as the tail (plus lighting on Libellule's face to match the glow). I also messed with the shading a bit but as her hand is not in shadow below the dragon I did not darken that portion of him, that was my reasoning for his lighting, with the glow added it is not so crucial now (I think). Hope you like the changes. Thanks again

Lovely image, but the dragon is almost invisible.

Thanks, CMYK ... dragon is now enhanced a bit more. I didn't want him too strong as he is not really the focal point of the image but your suggestion had merit. Almost took him out completely as he seems to be causing a lot of trouble (which I guess is natural as Firetails are known for being mischievous little creatures)

. Thanks again for the feedback.

I think the dragon is now distinct not distracting but still adds foreground drama.

Absolutely gorgeous work, author! Love all that you did to the model, especially her face.

Thanks all so much for the vote, comments and favs!!!