High In The Air - created by George55 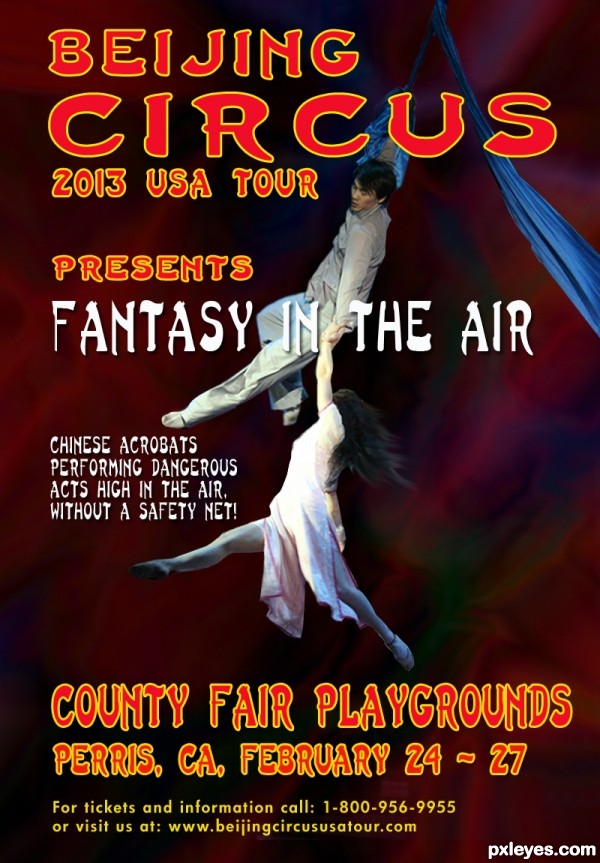 Thanks to eviltomthai from flickr, for the pic of the Chinese acrobats and D Griebeling also from flickr, for the pic of the Chinese background.
Typography are fonts from PS.
UPDATE: I really appreciate your comments and your suggestions. I just wasn't sure about the Chinese background. I thought at the end that it was so busy, and I decided to use a simple colorful background that goes with the text colors and image. No more changes will be made. (5 years and 1643 days ago)

Good poster author, but shouldn't it be "Beijing"...or is that how they spell it where you live? GL!

Sorry if I sound harsh author, but I know you are talented and can make awesome stuff.

You're right Rob...will try to manipulate the image I have now...You do not sound harsh...This is the only way I will learn. Thanks for suggestion.

Certainly not bad, but a few things about the typography. You used blue text on blue background. Although the text has a lighter blue you stil may want to give it a more contrasting color (or maybe white). Other thing, since it's about a Chinese circus (or only acrobats?), is it an idea to give the whole poster a more asian atmosphere/typography (but of course keep it readable) instead of the typical western-american font? Good luck!

Thanks Waz. I am working in a photomanipulation as you mention on the rules. Will redo the text too...probably tomorrow, kind of late here now. Comment appreciated.
UPDATE: Made some changes to the original entry. Cropped the original source, and placed over a new background. I used a Chinese font ( Last Ninja ) for the Typography. Hope it fills the contest suggestions.

If this were my image I'd desaturate the background a lot...right now all the colors are competing for my attention.

Thanks again Bob. Background desaturated and motion blurred it a little more. The font is (Last Ninja). The bottom is Futura HV

Heyhey, quite a make over, author!

Only thing left is that I might lower the block of text from county fair till the web address. Not too low, but imo it't covering the photo a bit too much. Good luck!

Thanks again Waz....made some changes to text.

Thanks for comment Guiltss, for me the background is blurred because it gives the feel of movement..You can imagine the speed the acrobats are moving...?

I understand what you try to achieve here is motion blur. As a photographer that have shot many moving things (including this kind of act in a circus) theres no need to have a drastic motion blur because the performers doesnt move as fast as racing cars, what you need is motion blur in some part of the body to make it looks more realistic

Thanks again Guiltss...You are right, I brought the background back, and blurred it just a little. I also blurred the right side of the acrobats.... suggestion appreciated.

It is so much better Author

Now I can't see anything against the background. It's all white on white, black on black. You had it right earlier.

Thanks Bob. I am following your (Yours and others)suggestions...what can I do now? Blur more? Desaturate more? etc...Tell me, I will do it...I am here to learn.

Much improved from your original! Everything pops more. Good luck author! 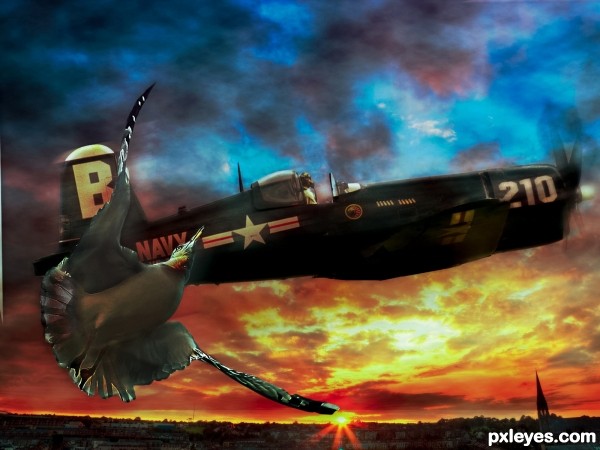 Thanks. I worked on wings but i cant see the diference maybe is my screen.

Thanks dude. Firts i dont had any idea what to do with the light sources. xD 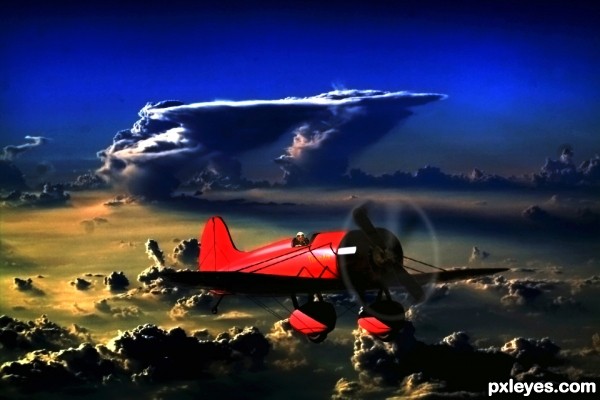 Florence Leontine Lowe, a.k.a Pancho Barnes, granddaughter of Thaddeus S. C. Lowe, who had pioneered American aviation with the establishment of the Union Army Balloon Corps during the American Civil War. In 1930 under the sponsorship of the Union Oil Company, Florence won a race â€“ and broke Amelia Earhart's world women's speed record with a speed of 196.19 mph (315.7 km/h). Barnes broke this record in a Travel Air Type R Mystery Ship. During the late 1940's and early 1950's,Pancho had an enormous influence in the social lives of American aviators such as Chuck Yeager (1st man to break the speed of sound barrier) and Buzz Aldrin (the lunar module pilot on Apollo 11, the first manned lunar landing in history) at her Happy Bottom Riding Club a dude ranch restaurant and hotel operated by Pancho Barnes on the site of current-day Edwards Air Force Base. (5 years and 1867 days ago)

Perhaps a little, look at the hi res. Thanks.

Fantastic image, author, love the dramatic lighting in the sky now, and the contrast of the primary colors. Great background story as well.

Pancho was quite a rebel in her day. Thanks Pearlie!

http://www.legendofpanchobarnes.com/film/index.php
There's a full length documentary I saw a while ago on Netflix, but forgot the title.

I saw it too, good stuff. If you remember the movie "The Right Stuff," Pancho's Happy Bottom Riding Club was an integral part of the story.

Great tribute to a great flyer Author!
There are several documentaries about this great aviator, I think the one you mentioned Bob is "The Legend of Pancho Barnes and the Happy Bottom Riding Club" (the same one shown in the link you provided). It's a great story very well done with Kathy Bates voicing the words of Pancho Barnes.
BTW the officers mess at Edwards AFB is named "The Pancho Barnes Room".

The blacks in the background still kill the blacks on the plane, hi-res or not.

Nope check your monitor. "The blacks" on the airplane, you are referring too must be the shadows under the wings. What no comment about my shadows?

Obviously not good enough to keep this from making 3rd place and talent points. Thanks all.

Taking the air - created by Majo 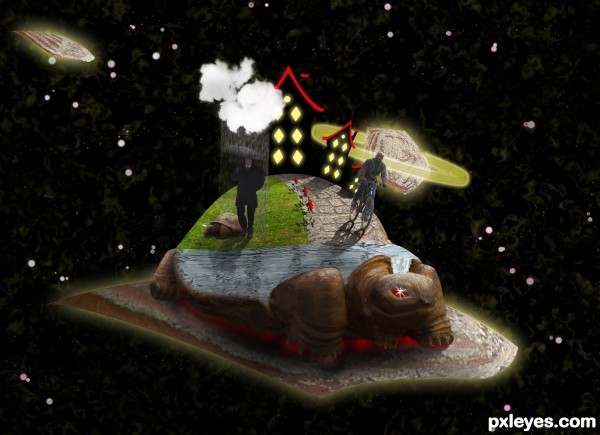 Love is in the air - created by micoprego 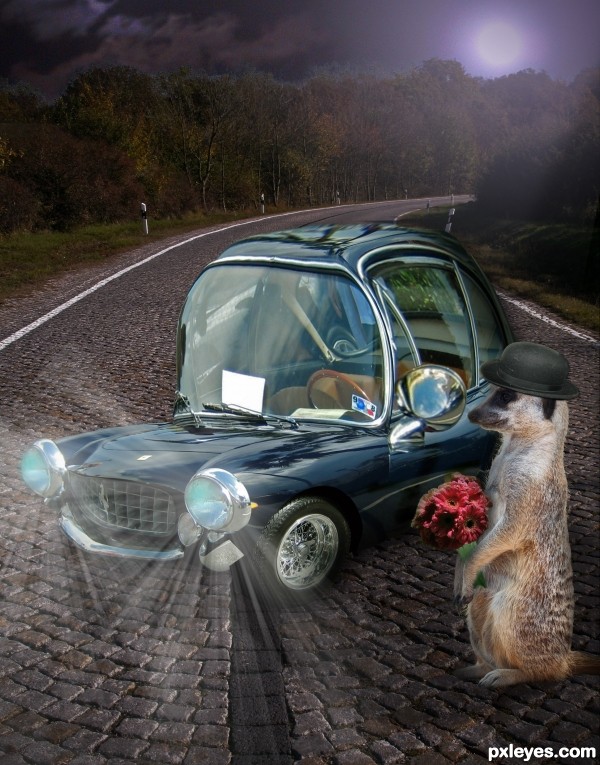 The car looks cool, but the meerkat needs to be darker to blend in

Oh, it's just a small detail... the side trim (door protection) doesn't match...

error corrected, thanks for your help, Erikuri