too real - created by rsguetre 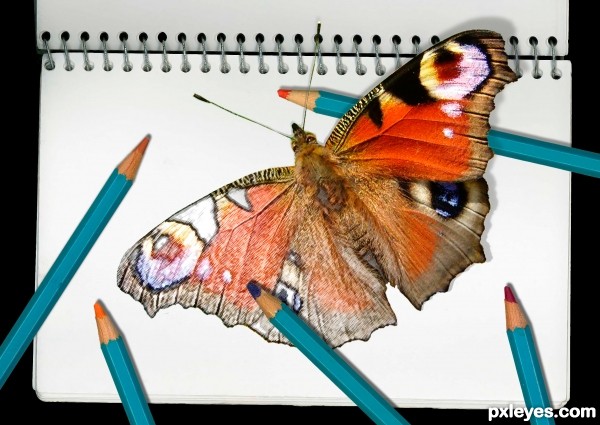 I liked it better if the image was turned in a diff direction so there would be more shadows fallen on the butterfly..

Thanks for that comment, I guess I don't know what you mean by turning the image in a different direction because I don't know how that would cause the shadow to fall on the butterfly ... unless the wing were raised up high enough to cast a shadow on the other side, which I don't want to do because then the raised wing would look quite small because of foreshortening.

right now it only gets shadow on it from the one pencil and only very small part which is hard to see.

good eye! thanx for the suggestion...

yes! thats what I meant

This is a fairly nice looking piece of ...filter work. Your blending between the "sketched" part and the live butterfly is commendable. There are however some inconsistencies in the shadows. Look at the shadows cast from the binder's rings versus the shadows of those pencils and the butterfly.

Nice blend and creative thinking. I like this kind of style in general!

Thanks for the helpful comments and encouragement, I was so worried about the shadows in and around the butterfly and pencils and completely overlooked the others...

pixelkid -- this kind of stuff is what I like about photoshop too: something that can't be done purely photographically, nor can it be done with paints or pencils alone.