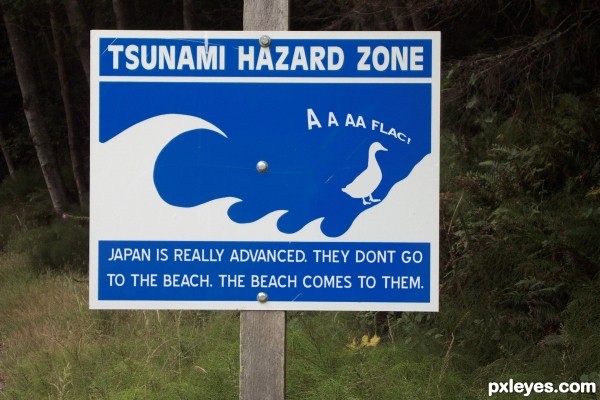 Gilbert Gottfried was fired as the "Aflac Duck" voice for some tweets he wrote on his twitter page. We all know that laughter is the best medicine. (5 years and 2513 days ago)

This is NOT meant to offend, rather, to point out how funny it is that posting on Twitter is serious business.

We also know there's an appropriate time and place for everything. Not sure the relatives of the over 7,000 dead would see the humor

This does not point out anything about the Twitter posts, other than to repeat one of the insensitive, offensive, and poorly timed "jokes" that caused him to be fired.

There must be some other way you could convey the "funny" attitude regarding tweets besides visually validating this "joke."

@kyricom: I agree there's an appropriate time for things to laugh (and also when you better should lower a cynical voice), but as mentioned in the comment, that's not the author's point.
Having said that, I do agree with Mossy about your approach of the article. That is, if you want to stress the fact that Twitter takes a more serious place in the world, show that more in your entry, because right now it's more about the tsunami and the comedian.
Of course that's your good right -I guess, and I dont wanna push you to any way of thinking either- but imo it does not cover your defence words in your comment. Good luck!

Well maybe my approach was a bit wrong, but it was ment to show how something on twitter can be as significant as posting a litetal sign.

"We also know there's an appropriate time and place for everything. Not sure the relatives of the over 7,000 dead would see the humor"

even in 20 years those relatives won;t be laughing bout any joke this kind... so there is no appropriate time.
We all get the moral and the respect point of view
but can we please just judge the photoshopping skills in stead of getting our morals out front?

There are world wide forums where people can share their feelings,
this site is to see the skills and give them a grade.
Let;s just do so and stick to what we are all here for...

agree with Waz on that one.

PXL, if your point was correct, there wouldn't be any guidelines on this site concerning content.

@kyricom, my entry does not violate any content guidelines.

I do find it funny

I never said this violated any written guidelines of this site in any way.

@kyricom, then why argue with PXL? We can debate where my entry falls morally (until were all blue in the face), but thats not what this site is intended for, rather, lets comment/vote on the quality of the work, or talk about my SBS.

I knew from the moment I chose this news article that some people would be offended, but I am a firm believer that true art should envoke strong emotional responces, wether its positive or negative.

seriously its not funny at all, i do agree with kyricom ...we should be more sensitive. why don't you make something from 9/11 for us here to laugh?? No..?

Sorry , my morals stay firmly out front......I appreciate its not your joke but lets face it you`ve just used your skills to visualize an already sick joke.
So to judge your skills on that basis..its a no no from me but I`m sure Japan will see the funny side.

ADDITION: This will look really good doing the rounds on the internet with the pxleyes watermark attched, great advert for our site.

Author, make a joke of something funny, not of a tragedy. Probably you saw that in Tweeter it is funny, but you posting something like this here for a contest? Com'on, I sure would have some respect for all the people who perished in the unfortunate incident, Tsunami and Eartquake.

There is a time for laughing at a joke that depicts something funny, but your sign, is not a funny matter. At least for me, I will have more respect, as I say, and instead of posting something like that, I would lit a candle and say a pray for all the people who are gone. It is sad.... Isn't it? Think twice next time.

isnt there some kind of site guideline about bashing someone and flaming in the comments? i think you all should keep your negativity to yourselves and vote based upon the image quality.

Well, sgc, I certainly wouldn't want to impute you with stupidity.

You are however, entirely missing the point. No one denies that about 70 years ago Japanese celebrated their attack on Pearl Harbor, or that many Americans celebrated the bombs on Hiroshima and Nagasaki - neither of which, of course, have ANYTHING to do with this. You are basically formulating what's called an "Anaolgy Warrant" form of argument. In other words, you show two situations and claim that because they are so similar, what's true about A should also be true about B. Unfortunately, for an analogy warrant to work, A and B have to actually be similar. First, 70 years ago, Japan and the US were mortal enemies. A situation where it isn't unusual to celebrate the others' defeats. Today, Japan and the US are VERY close allies. Second, you can't judge the actions of 70 years ago by today's standards. Third, if your analogy was going to work, you ahould have shown how we celebrated when London was bombed by the Nazis (for example). England was our ally, like Japan is today, but you don't show us celebrating that event. Why not, because they weren't our enemies! Thirdly, equating the earthquakes and tsunamis of recent times to this situation is what's called a "non-sequitor logical fallacy." Earthquakes don't really care who's allies or enemies... they kill anyone in their path. MOST people don't see a "comedic twist" to 1,000's of people dying and everything wiped out for tens of thousands of others. The post by the author that they don't "mean" to be offensive is very telling. Thousands died, tens of thousands wiped out - I know it's potentially offensive because I'm mentioning it might be offensive... so, I KNOW it's offensive, but I didn't MEAN to be offensive. Of course it's offensive. Part of what's grating is that this attitude is somewhat pervasive in our (US) culture. If I'm offensive, it's YOUR fault for being offended, because I didn't MEAN to be offensive (even though I'm perfectly aware of how offensive it is). But if someone offends US, it's something to get all mad and worked up about. How dare they!

I would greatly appreciate if a mod will lock the comments and delete all of this nonsense.

The goal of the contest was to pick a funny news peice yes? This isn't funny so to me it doesn't relate to the contest.

If you want to go on art points.... well its not something I would give a great score to anyway, looks a little basic to me for a contest here...

@keiley22, ive seen plenty of entries (some that even end up winning) that are much more basic than this, and dont even look believable too boot! also, the title of this contest is "odd news" not "funny news" so your point is invalid,

Not to mention, I found it quite funny.. does that mean im a heartless monster? NO, I do have sympathy for all of those that died, and are homeless as a result of the tsunami (probably the worst natural disaster for many years to come)... just as if you find a racist joke funny, are you automatically a racist? hell no!

Gilbert Gottfried was recently fired from aflac... lol! (he was the voice of the duck if you didnt already know)

besides the fact that the joke isn't funny at all (wich indeed is just an opinion) and that I think it's really dump to make fun of like 9000 dead people and about 5000 missing and all the families of the victims.
I'm also not amazed about your entrie.. Photoshop skills seem to be minimal, wich isn't a real problem, but at least try to search a less offending subject to start with.
Very very dissapointing image author...

Ps. "This is NOT meant to offend"

Oh no you guys got me, im a heartless, racist, insensitive, no talent havin' retard. Your comments have warmed the cockles of my heart, and insprired me to change my views! Too bad I was born without a mute button. Im just here to have fun, so sit down and enjoy the ride.

"Creativity is allowing yourself to make mistakes. Art is knowing which ones to keep."

I think your Description. (laughter is the best medicine) doest really go with the distruction that it caused.

About your image, dunno i guess i was expecting to see water somewhere, but i think the inclussion of the duck was a nice idea

Mentally Challenged is a much better word than retard.

Did you see that? The new kid got smacked! And he took it!!! (Think I stole that from Encino Man)... shhhhh!
Looks like a real sign to me! Yea, I know, here's your sign... and back at ya! GL Author!

Ya'll sure are a PC crowd... Pun Intended

about what maclu said wayyy up in the comments about making something from 9/11..the event that happened on 9/11 was an attack not a force of nature..the sign technically is a fact, but has been taken too far as a joke. 9/11 simply can not be compared to this.., i thought this sign would have been funny if no one died, but people did die so i have very mixed emotions about this one..=/

Untimely sure, but a good chop author. Very creative.