Singing into a Carrot - created by Drivenslush 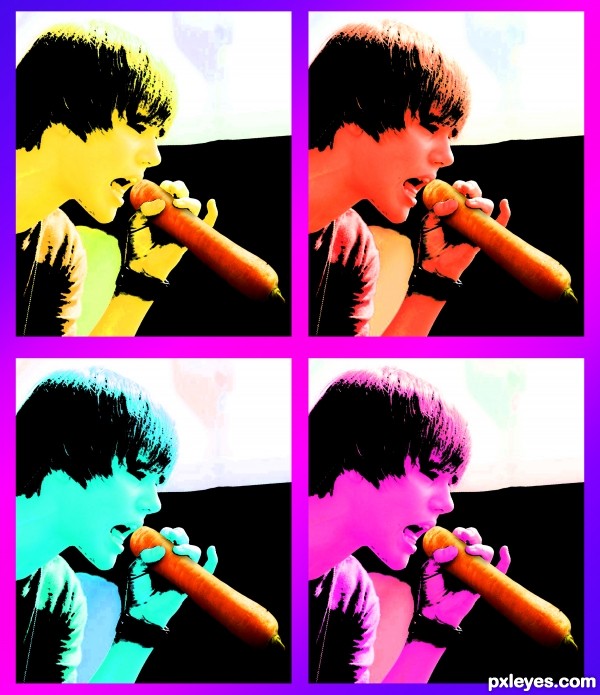 The first time I ever saw Andy Warhol, he was on Saturday Night Live and I remember him eating an apple. ... here is the transcript.

(Fade in on a pair of legs walking around a house)

Andy Warhol: I, uh, I'm in a modeling career right now. I did two runway shows. I did one for GQ and I heard that you have to sleep with someone to get under the covers. I'm willing to do that.

(Various background voices are heard as Andy makes his way to a bathroom. He turns around to face the camera, but we only see his shadow)

Andy Warhol: What are we doing in here?

(Cut to Andy standing in front of the bathroom wall. As he munches on his apple, the red text "ANDY WARHOL ON SATURDAY NIGHT LIVE" scrolls up the left side of the screen.)

Andy Warhol: In the first place, I never thought I'd ever be on "Saturday Night Live" because I hate the show. I never watched it. I didn't think it was that great and if you're home on a Saturday night, why ARE you home on a Saturday Night and I think all the comedians should be beautiful and not funny. Gee, I heard a great joke yesterday at Holston's and it was so funny that I thought I'd tell it to you. Uh, where did Prince Charles go on his honeymoon and the answer is "Indiana".

(The screen slowly fills with static as the credits and copyright date appear below; fade)

I originally had Andy Warhol's Pillow sized silver balloons floating in front of buildings with the Justin Beiber posters mounted into the buildings, (Like he did with his pictures of Mao in China) but I was informed by the Mods that was a no no, so I resubmit this version :)

I nixed the silver pillows, and the back buildings, and just made a Warhol Classic Image, just made Justin singing into a carrot instead of a microphone. (I would have used an apple but it's the wrong shape)

LOL, the carrot works great! I've see this act done with a deodorant can, too.

I don't understand why the apple is a no no, but I like the carrot here, and as you can tell, I like apples. Nice work here.

hehe, Emik the apple isn't a no no, but my first submission of this image was pulled by the Mods for being off theme.. (I had placed this image in an actual public setting and I was told THAT wasn't on theme) no big whoop, tomorrow is always another day