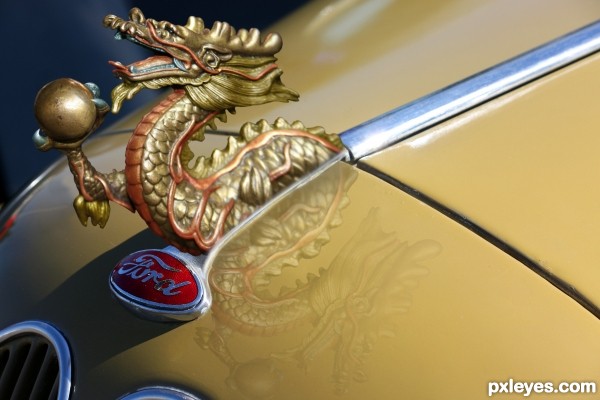 Can you use the word 'Ford'? Maybe just slightly tweak it.. other than that i can't find anything to fault.

Ponti, I don't see why not, it's just a photo of a car hood. Besides, it would have been too hard to change it to Nixon.

LOL Nator...the car shot was a great find...right color & angle. And you gotta admit that old Ford logo has stood the test of time, just like the Coca-cola logo!

wrong shadow on the dragon - perfect montage and good reflection...

Very cool and creative. While admittedly over-grand for a today's Fords, your hood ornament merely replaces another equally ornate one from the 1930's in your source image. As locxoul noted, you retained the source shadow which included an under-belly opening that your replacement ornament doesn't have/fills in. The reflection is an intriguing addition since your source doesn't have one. It should probably be more subtle but more problematic is that its perspective is more like a shadow than a reflection.

I would've liked to see a sharper line where the dragon meets the car. But having said that this is a really nice source find and really nice execution. I know the reflection isn't supposed to be there but it looks damn good there now.

Lovely work. Like the way that you have done the red/orange colour over a portion of the dragon ... ties it in beautifully. And it is cool that the Ford logo has and almost dragon skin texture to it. Well done!

Good idea...like the colors and fits in perfectly

@ Dan Lundberg & Chalty: Look at the source pic. It certainly does have a reflection, which I removed, so the dragon reflection absolutely belongs. Fixed the shadow...thanks.

distort a little bit more on the reflection following the car contour ll make this a perfect reflection - still ve wrong drop shadow of the dragon that s still ve flat shadow... but this got me 75%vote 4 the idea/update.., gi author - this ll stand againts doorknoker 4 photorealistic lookin...

Great image, shame about the ford badge but you`ve managed to make it passable