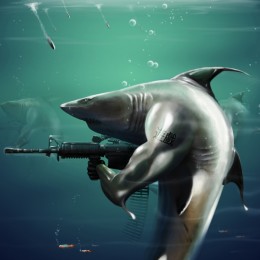 This week's theme is: something fishy
Create a scene with a fish as the focal point. It can be a fish king holding court under the sea, or a fish with a microphone singing onstage or a fish surgeon in an operating room, or anything you can think of. The more absurd, the better!
Remember we mean fish only, be sure your subject is classified as a fish. No whales, porpoises, dolphins, walruses, seals, sea lions, amphibians or reptiles allowed.

Since those are all the members who entered round 1 there will be no reserves this week.
Have fun and good luck this round to all!


Status: finished. Check out the winners below!
Suggested by: MossyB
solkee: Good luck everyone. Unfortunately I am away and will be unable to enter this round ( 5 years and 1027 days ago )
Keiley22: wowzers, this has to be some of the best artwork I've seen... it was hard to vote there should be so many winners for this one lol
( 5 years and 1025 days ago ) 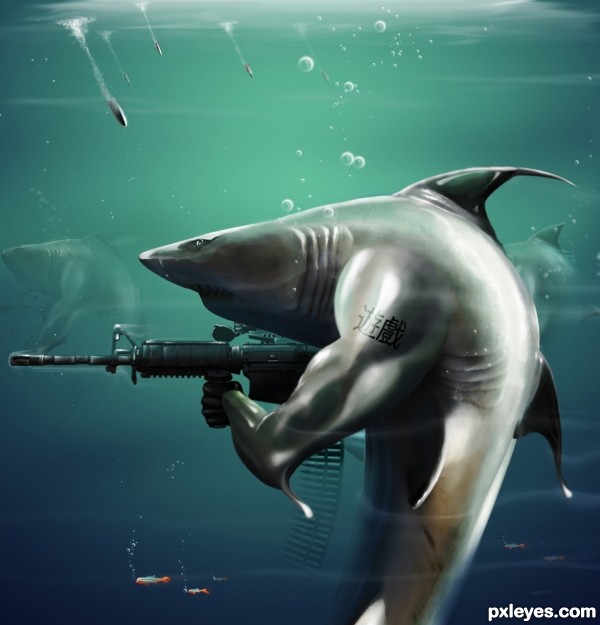 Chinese translation of the tattoo is 'Game' :P

Hope you enjoy this like the same way I enjoy yours :)


ALSO:Credit goes to the stock provides for helping me completing this ! (5 years and 1026 days ago)

thank you glad u liked it !

.Thanks for the fave !

Super,cool and original!! Love it....

Thank you so much Carol :P appreciated a lot !,thanks for the fave too

Thanks a lot ,glad u liked it

,thanks for the fave too.. Hope to see you in tournament 3 :P

thanks for ur comment.I love doing things with dangerous characters :P

glad u liked it

thank you soo much!

Awesome overall, but it's not clear why the lower portion of the front shark seems more under water than the uppper portion. The tatooo is a nice touch but I'm not quite convinced it matches the contour of the arm. I think I would have cheated on the lighting a bit and brightened the teeth to make the foreground shark more menacing.

I personally find the background sharks merely distracting. I also don't get the point of the little orange fish whose bright color distracts from the central figure IMO.

why the lower portion of the front shark seems more under water than the uppper portion? thats because when you go deep underwater then, the water becomes more darker & it adds the depth of the picture ,well I thought of lightning the teeth and yes ,it would have looked more menacing but unnatural.The background sharks were blurred as possible but without them, it would have looked non powerful force & those little fishes were just extras .....(IMO)btw thanks for ur suggestions !

i like how u played with light and shadows. i dont like matial themes, but nice work

thank you so much for the comment ,glad u liked it!

thanks man ! needed ur support

that was a great compliment !

hey congrats! and all the best!

glad u liked it ! 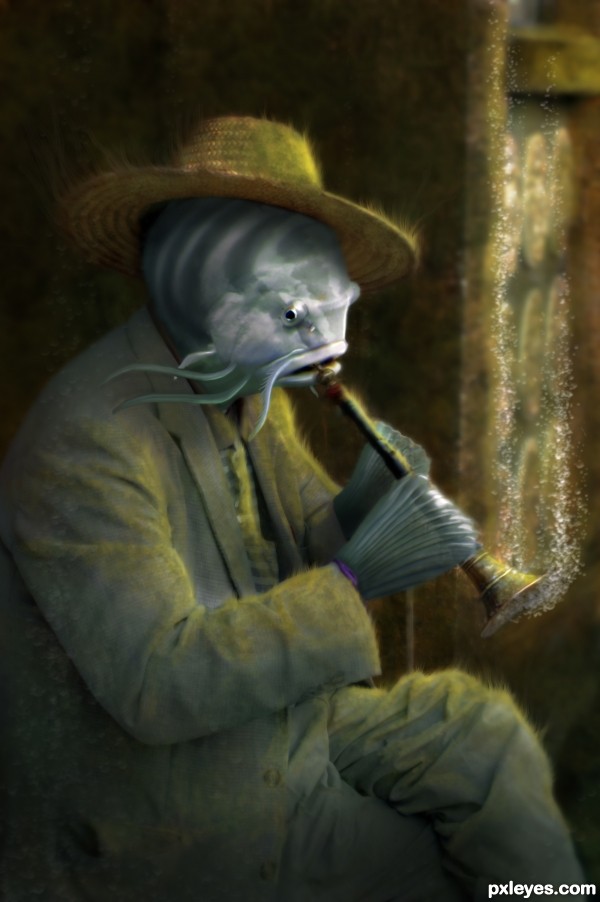 Great job! Would love to see how the bubbles were made.

Thanks for the comment Bob. I actually use a bubble brush provided with my Wacom tablet. I use different pressures with varring sizes. Thanks for the interest.

Thanks! My Wacom is so old, it doesn't have fancy stuff like that. Good luck on a well made entry!

Can't live without my Wacom. My daughter broke two pens on my first Wacom tablet so I cashed in all my pxleyes winnings and bought a used one to replace the old one.

Excellent work. Fish looks so sad but at the same time I think that the sadness makes this picture beautiful.

I'm not surprised....here. Brilliant job! I absolutely LOVE the slight transparency of the fin showing the instrument. Bubbles are awesome too. I only have a 'bamboo' no fancy brush settings for me.

Beautiful image with great melancholic mood, and love the transparency of the fins too.

Cool. As if it comes out of a Chinese fairytale!

Seriously, this is simply stunning. I would hang this piece of art in my front room.

this one is amazing. I really like the motive and the mood. Its a wonderfull piece of work and goes straight to my facorites

Love the attention to detail with the algae. Great image, author!

Great one... congrats my friend...

sleeping with the fishes - created by anatole 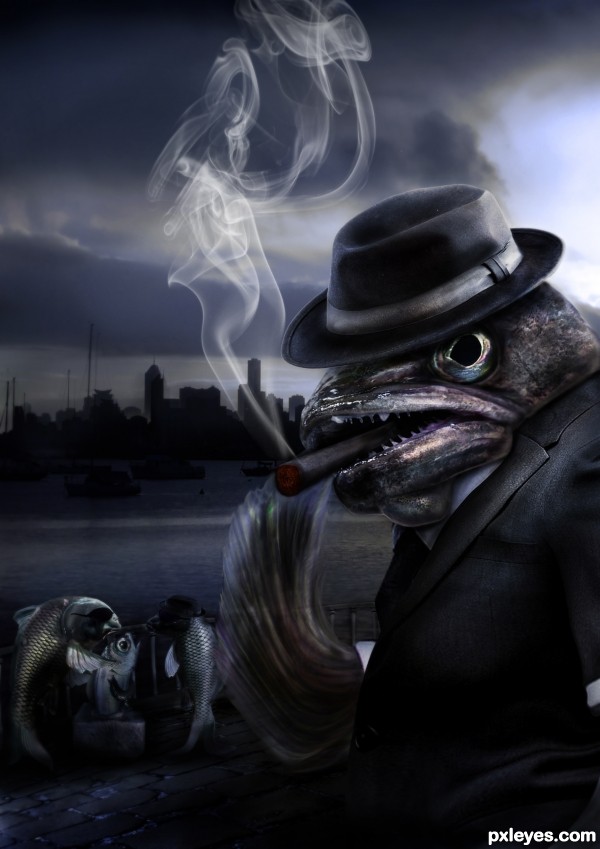 Ah, come closer my friend. Get comfortable. You witnessed something thats familybuisiness, so I guess we have to talk. You know, this pathetic traiter didnt understand the concept of silence, but im sure you do. You dont want to end up like him, sleeping with the fishes, right? I let you go, thats no problem. But one hand washes the other, In return for my merci you leave a nice vote to this entry, lets say about 95 percent. Isnt that a solution that makes both of us happy? Nice to make deals with you.

I think I'd remove the big guy's fin, though...it's kinda blurry and doesn't really look like it's holding his cigar. He'd look tough just holding it in his mouth. Excellent mood...GL author.

htank u for the constructive critic. yea, i understand what u mean by blurry fin. guess i should have worked a little more on the details and edges. Maby i´ll rework it some day. thanks

well, there is somehting unnatural on the cigar. I guess i should have bend the fin around the cigar or move it a little down and replace the fin to anywhere. thanks for your opionion

Dramatic, aggressive, disturbing with an appropriately moody color palette. The double-exposure thing happening in the skyline background visible in hi-res is odd, however. Also, I don't think a fish victim is going to be all that threatened by being thrown into the water; a cat victim might be more appropriate as an enemy that can't swim—and an adorable orange tabby kitten could accentuate the evilness of the foreground figure. (Would "sleeping with us fishes" be a more relevant title?)

I understand what u suggest with the little cat, but i wanted to create some absurd scene, the fishes are on land and its possible to drown them. Wanted it to be a little ironic, but a kitten would have been an idea too. thanks for your suggestions and critic

well done, congrats and good luck for the next round..

Time for bed - created by ushurani 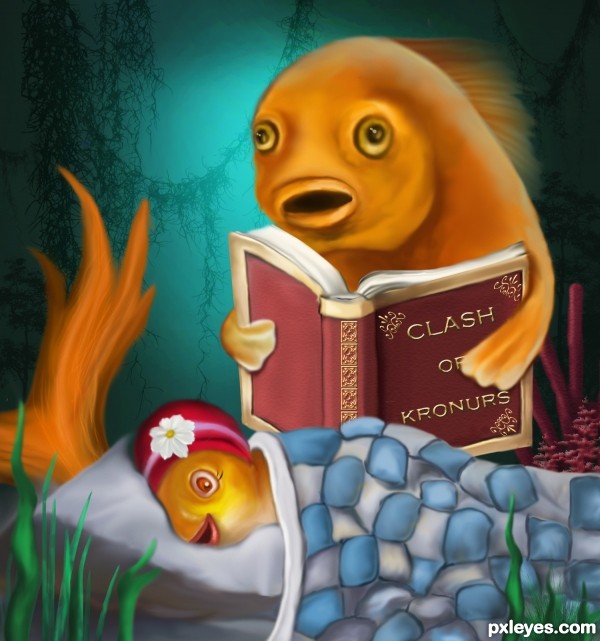 Sweet, but the child doesm't look like a fish (as it has a distinct skull oriented 90 degrees from the neck) and what's with her headgear? The orange flame-like thing in the background distracts by being the same color as the central characters.

As I didn't get the little one's head right I had to go with a cap/headgear. I tried to fix the head but in vain

And the flame-like thing is the tail

Funny....by the way, Dan --- that orange "flame-like thing" is the goldfish's tail and this photo would look strange if she didn't have one!

It's most obviously a tail to me. I like her little hat, she must be a newborn - got a pic of my neighbors' new baby girl with a similar hat. Sweet image and fine painting, author!

overall a nice image. A couple of nitpicks would be for some of the edges to be a bit sharper and for the catchlights in the eyes to be a bit brighter. Good Luck Author!

Thanks for the suggestion. I fixed as much I could in the little time I had,as I am busy. I brightened the catch lights in the little one's eyes and left the big guy's eyes as it is since I want his eyes to be weary and dull.

Gorgeous! I love the glazed look on the grandparent's face opposed to the perky wide-awake expression on the little one. The tail looks really good and balances the picture perfectly.

Wide-awake expression was exactly what I had in mind while painting the little one's eyes. I am glad that I accomplished that.

amazing work author, i love the colouring of this image and my 6 year old just asked where fish get books from lmao

I really don't know what I would tell a 6 year old if I were asked that. Thinking hat on.... I would lie to them that the fish got it from an underwater bookstore just like we lie about tooth fairies. I guess there is no harm in that right?

congrats, good luck in the next round... 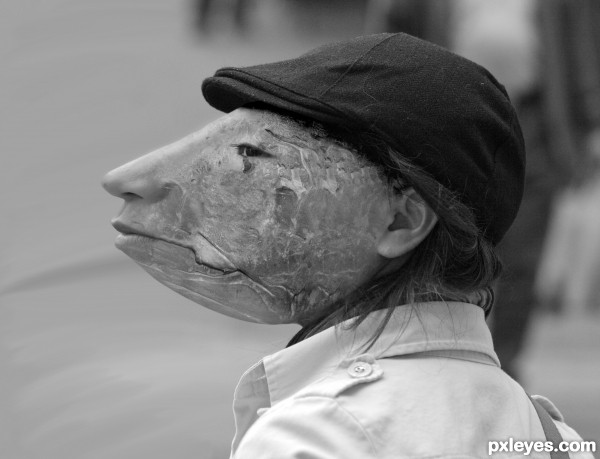 Looks like my cousin "Louie." I think he deserves some credit!

Weirdly cool, and I think the lack of color (even though the face started that way) helps with the impact.

Congrats to you too. All the best for the next round.

congrats, good luck in the next round...