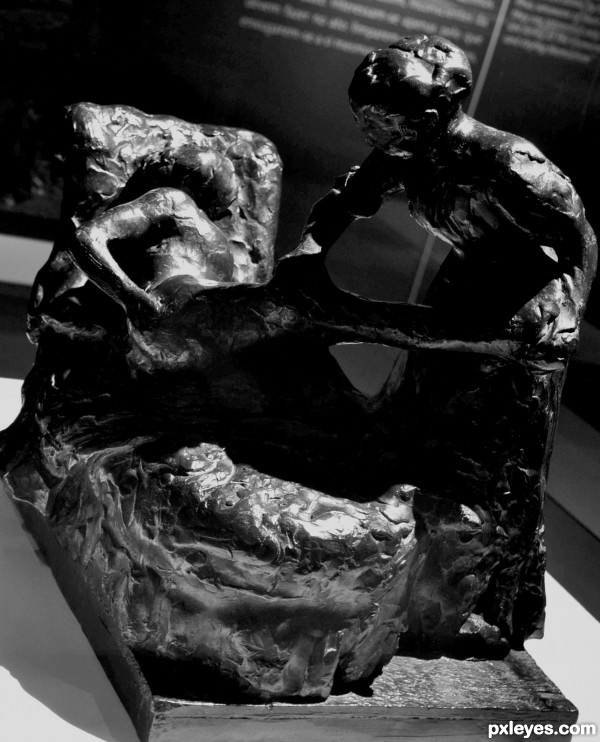 Carving made of paper and after recovered by the family which found these scultures after his death.Done by Edgar Degas famous for their paintings and scultures from ballerinas in a very different manner of view. about this incredible art. Upon Degas' death in 1917, more than 150 pieces of sculpture were found in his studio. Most were of wax, clay, and plastiline. Nearly all had reached various stages of deterioration. Illustrations of The Little Fourteen-Year-Old Dancer, as well as some of the other better-preserved examples were published in the December 1918 issue of La Renaissance de l'Art FranÃ§ais et des Industries de Luxe, the March 1919 issue of Vanity Fair, and the Julyâ€“August 1919 issue of Art et DÃ©coration. The debate about their preservation and ultimate disposition began. Degas' heirs were in disagreement about a great many things, but by 1918 they had decided to authorize a series of casts, or editions, of bronzes to be made from seventy-two of the small figures. Paul-Albert BartholomÃ© (1848â€“1928), a sculptor and Degas' longtime friend, was to prepare the figures for casting, to be executed by the Paris foundry of A.-A. HÃ©brard et Cie. (5 years and 1626 days ago)

I am not sure if it is real carving or some other technique of making sculpture. Lighting and background should be better chosen...

As it was in a museum and the light inside was very very low I could not do in other way. I agree with you! Regarding technique, it was done in paper and after Dega's death (see a little bit about him under the entry) the family recovered the parts with some kind of resin

I am not doubting if this is a paper or not. but this sculpture doesn`t look like a carving. Most likely the paper was melt in a water and than shaped bay hands.... But I haven`t seen it so can`t be quiet positive.

In order to avoid troubles and questions, I asked the mods to remove it. Tks

It was not my intention. A s I said, a didn`t see it, so I can`t judge. Sorry if made you a trouble..

I know it was not your intention, but even so, the background is terrible... tks

Sooo, is this a carving or a bronze cast?

Dear, this was done in paper, Edgar Degas - as you can read in the entry - has done these scultures in paper and after his death the family found the collection and recover them with a kind of resin. He is famous for his sculptures unusual situations relating to ballet. Tks for comment.