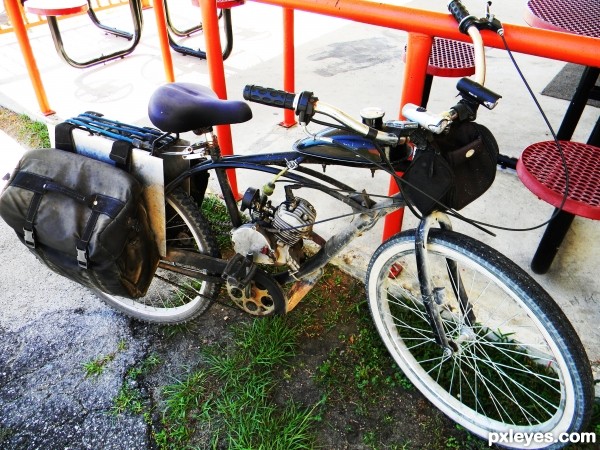 these have been around for a long time

I had never seen one before. Just thought it was funny, especially the makeshift headlights. When he left, he pedalled and it just started on its own. Funny, but really cool too!

yeah,they are cool. I could be wrong, but I believe that is how motorcycles started out actually. I do like the makeshift saddlebags/plate made for it

The first of these came out around the turn of the last century.....they were known as Motor Pedals, now Moped. An English company, Raleigh, made one of the most popular versions of these things called 'The Raleigh Runabout'......other Bicycle companies also built their own versions, including Triumph and Rudge in the UK, and Motopedo in Italy. Nowadays, the petrol driven engine has been replaced with a battery driven electric motor.

Look at that, I have learned something new today!

There really is a wealth of knowledge on this site! You guys are grrrreeeat!

There were people zooming around on mopeds all over where I grew up. They're fun!

Oh yea, mopeds I am very familiar with, these not so much!