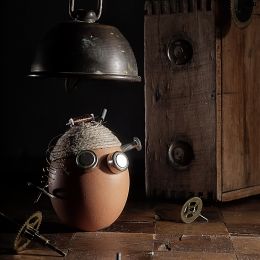 Winning entry, with a score of:
80.7%
By karaflazz

Photograph one, unbroken egg, in any setting you like...


Status: finished. Check out the winners below!
friiskiwi: I assume we are talking about 'REAL' eggs, not toy or Easter Eggs. ( 5 years and 614 days ago )
awediot: In art school, many of the teachers would give us the specs, or guidelines (rules) of our next project...[11X14, cut b&w paper only...illustrating the principle of achieving depth through the use of overlapping...for example,], then they make it a point to encourage us to nearly break those guidelines...[never said how "tall", or if a newspaper could be used, how glass overlaps or that moires can form mirage-like to distort space...etc] - THAT was putting our own creative spin on the work, and that is what made it 'ART'... It was how imagination and style was taught...

I thought literally a single, undamaged, thus FULL, thus REAL BIRD egg would be the subject of any shot... The context it was put in was the interesting part...BUT for me, a plastic or beaded or emptied (or candy or lizard or easter) egg is a great spin I'd always encourage. If it wasn't explicitly forbidden, let your imagination run amok...[how one then votes, and regarding what aspect of the photo can then change drastically...but that's much of the fun]... ( 5 years and 614 days ago )
friiskiwi: "awediot: In art school, many of the teachers would give us the specs, or guidelines (rules) of our next project..........], then they make it a point to encourage us to nearly break those guidelines.'
A lesson you took to heart. ( 5 years and 613 days ago )
awediot: "A lesson you took to heart." - LOL! now why would you say that? -still not sure if my rebellious spirit is nature or nurture, but it existed long before I learned how art fed off of it. - There is talent, skill, artistry and imagination in creating a beautiful image, however cliche it has become... It's coming up with a unique, provocative or moving image, however poor or perfectly it is produced, that I see more as "ART" ~ An EGG is a theme stripped bare...forcing the artist to think about the context they want to show it in before any technicalities rear their perfect head. > The 'Creativity' of idea, or the Presentation of it, are two things we should always be able to see as distinct. ( 5 years and 613 days ago )
Wayne Cheah: But above all this is a photography contest, so good photographic techniques, (the perfect head of technicalities), should be given due priority. Art for art sake stops when good photographic images begin. Of course all and any free-spirited souls are welcomed if not for it's entertainment value

, at least it demonstrates the sheer variety of talented opinion which a free and open contest like this can and should cater. ( 5 years and 613 days ago )
awediot: It is the line between "wow that is beautiful" and "wow that is interesting", which doesn't just split ART into 'commercial' and 'fine', but shatters it into being ultimately in the eye of the beholder...who may not 'know art, but knows what they like'. Ideally a beautiful, interesting photo that both looks great in any Hyatt lobby, while inspiring deeper thoughts within it's guests results... Few master the best of both worlds. ( 5 years and 613 days ago )
Wayne Cheah: Quote:- "Few master the best of both worlds"....yes, that's because the little matter of "THE THEME" gets in the way?

( 5 years and 613 days ago )
awediot: //he little matter of "THE THEME" gets in the way? // Hmmm...not really. A theme, guideline, rule, topic...is the basis of contest groups like this, and an excellent source of constant inspiration. It's why we're here... The problem is more that the human mind can't even always accept "take a picture of an egg" at face value, and valid questions about it being plastic or adorned, full or a bird's or marshmallow come up... Post "the sky is blue" on facebook and watch the debate take on a life of it's own. - 'ART' is a know ambiguity. 'GOOD' art, or photography, bottom line is a subjective term... Yes we agree on the common sense gist of it...technically speaking, but do a contest where the last 3 places are DEDUCTED points, and the arguments we don't have would begin to heat up. ( 5 years and 612 days ago )
Artifakts: Without entering the debate (my english is not so good to take part in it), to answer to Friiskiwi, the contest rules are : "Egg : Photograph one, unbroken egg, in any setting you like..." ... Nowhere it's written that it must be a "real" egg. ( 5 years and 611 days ago )
meatman: Huh ??? Deduct said amount of points that the three last place authors get in a contest ? Yikes !! What a creative idea.

( 5 years and 611 days ago )
MyMindsEye: Hmmm....I tend to agree with aweidiot's position on this matter.
We all participate in these contests to exercise our creativity and with a little constructive criticism,improve our skills.
Some works show better than others but that's where eye of the beholder takes place and the voters speak.
I have seen many works get wild praise that to my eye is mediocre (some of my own included) but, that's what art is all about. I don't believe anybody here is auditioning for a photo journalist position with Nat Geo or the likes. This is for a creative outlet we all seek to satisfy.
So...when the goals for the theme are vague and non-specific, artists should be able to take that as a licence to get outside the box and show some imagination and creativity.
Just as long as it's not what would appear to ANYBODY as an accidental snapshot from a first gen cell phone. ( 5 years and 610 days ago ) 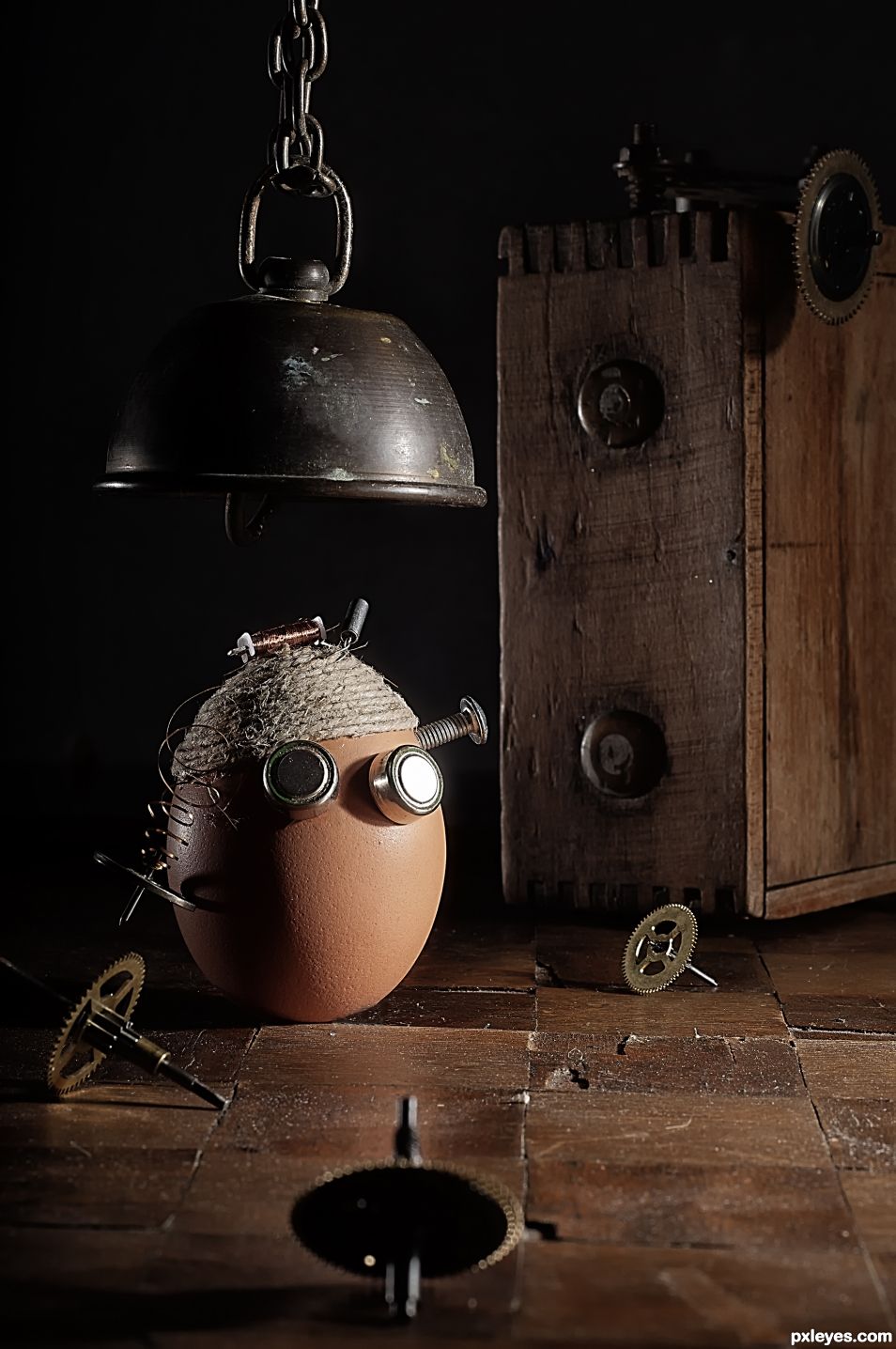 Not much more to be said. Great set up and lighting.!

Awesome! I love it

Beyond all egg-spectations!
Great Job Author!

Congrats, this is an amazing photo!

Congratulations.It was of course a foregone conclusion, your work is always excellent.

Congrats on a Masterpiece!

Congrats, I think I know that guy!

Time's up - created by friiskiwi 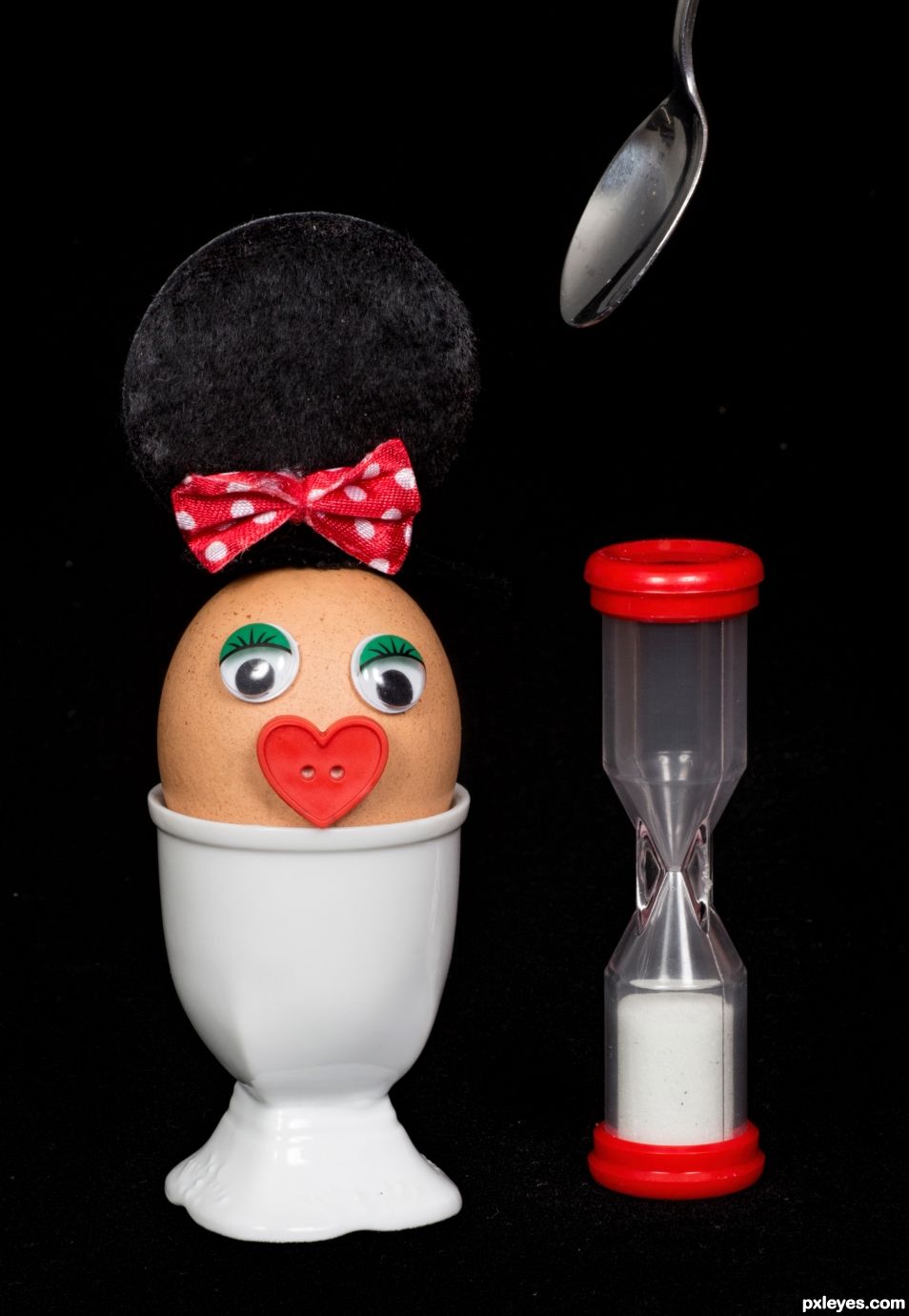 Mrs. Egg ready to get married! Nice set up and photo.

Thanks, First would have been impossible.

would be chicken - created by Clinge 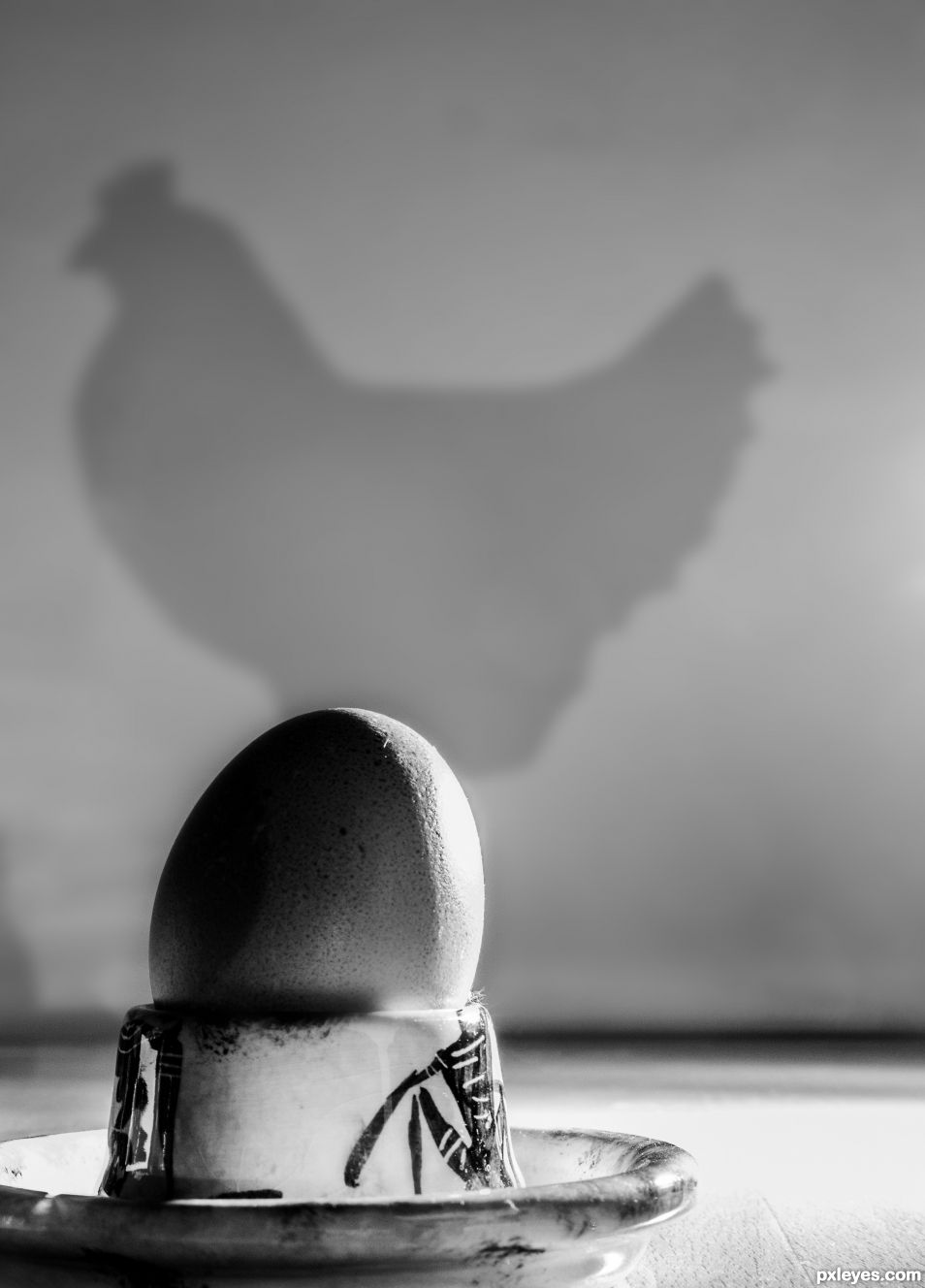 , had a hell of a time to get that shadow were it wa supposed to be ;-b

You're Next - created by Wayne Cheah

Home » Photography Contests » Egg » You're Next 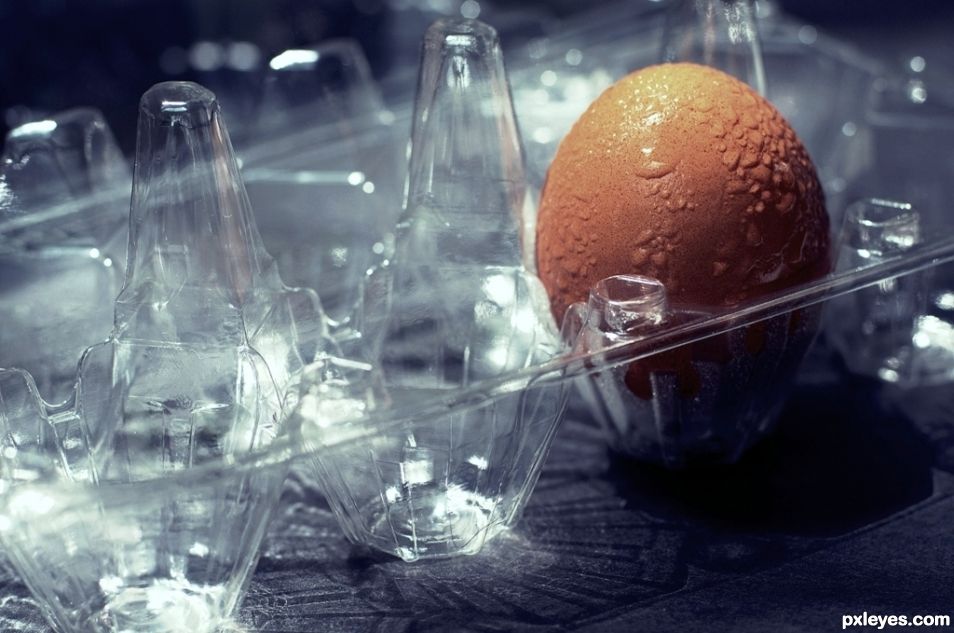 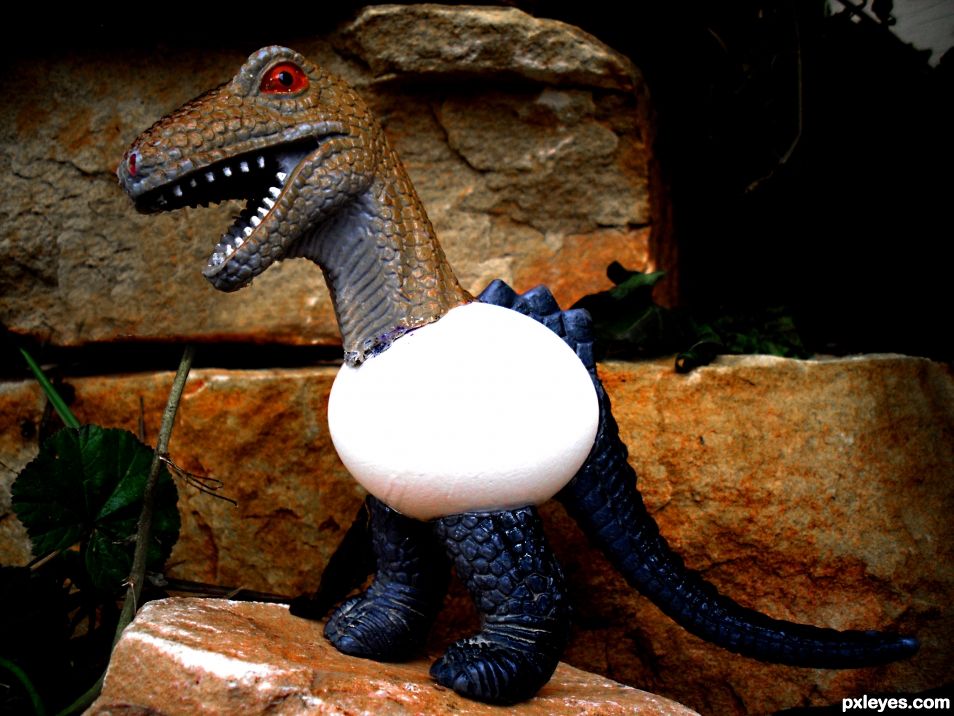 I thought they were egg-stinct!!