A Work in Progress: Jacuzzi Cinema

This guide was made for entry:
Jacuzzi Cinema
In Contest:
interiors

I made the basic shape of the jacuzzi by making a curve (shown in yellow) and applied Lathe on the Y-axis (extruding the curve 360 degrees).

To make some slight gave the seats in the jacuzzi different surfaces for future texturing. I also added a drain to the bottom (not seen in the final render). I then built a simple floor. around the object.

The walls and the Movie Screen was simply built polygon by polygon, with different surfaces.

The texturing was the only real job on this one.

For textures, gave the jacussi different textures to the color, specular and bump map. I also applied low glossiness and specularity to keep it more plastic.

The water is a combination of different bumps to make it bubble. It's not very transparent because of the viewing angle (Fresnel Filter), but I set the refraction to ~1.3 anyway for small details.

The ground is a bumped brick pattern, along with maps on specular, diffuse and reflection to make it look less mint.

The steam is a light coming from the bottom of the jacuzzi. It's set to cast volymetric light (good for fire, smoke and other effects). To save rendertime I set it to Spritemode and choosed the texture only option. I toned the effect down some to avoid consuming the rest of the image.

For final render i went for Final Gather Global Illumination, effected by both illumination and lights. I also chose medium anti aliasing and adaptive sampling.


I would have wanted to make some testrendering before the final one and add some more objects fore details. But because of timeshortage I'll accept the result as it is. It was good practise.

sources used for this step: 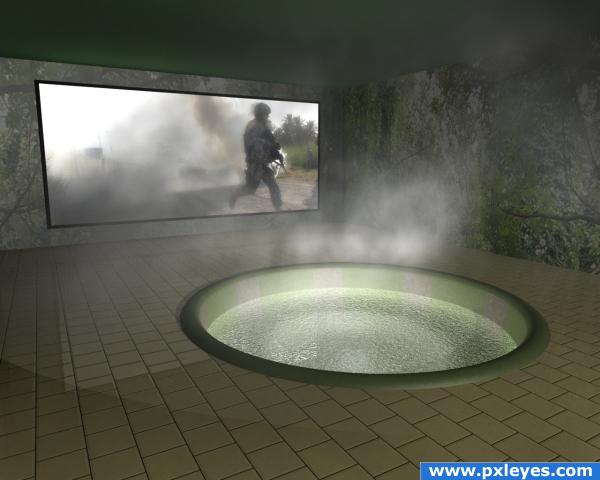 LOGIN or REGISTER FOR FREE
to rate this guide and create your own guides.