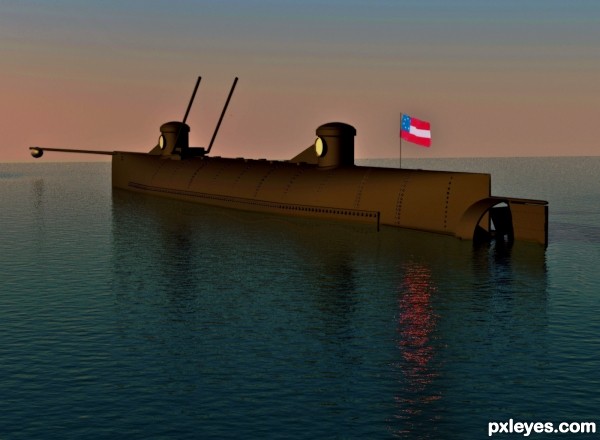 "H. L. Hunley was a submarine of the Confederate States of America that played a small part in the American Civil War, but a large role in the history of naval warfare. She was the first combat submarine to sink an enemy warship. The submarine was named for her inventor, Horace Lawson Hunley, shortly after she was taken into service under the control of the Confederate Army at Charleston, South Carolina.H. L. Hunley, nearly 40 feet (12 m) long, was built at Mobile, Alabama, and launched in July 1863. She was then shipped by rail on August 12, 1863 to Charleston, South Carolina. Hunley (then called Fish Boat) sank on August 29, 1863, during a training exercise, killing five members of her crew. She sank again on October 15, 1863, killing all eight of her second crew, including H. L. Hunley himself, who was aboard at the time, even though he was not enlisted in the Confederate armed forces. Both times the Hunley was raised and returned to service. On February 17, 1864, Hunley attacked and sank the 1240-short ton (1124 metric tons)[1] screw sloop USS Housatonic on Union blockade duty in Charleston's outer harbor. Soon after, Hunley sank for unknown reasons, killing all eight of her third crew. This time, the innovative ship was lost." (5 years and 2479 days ago)

That's quite a story. Very nice work, especially the rivet detail and the rudder fins and prop.

They think they may have found the remains of the Hunley, based on reports of lookouts on other ships in the blockade when they sank the Housatonic. When they were finished, they were supposed to signal shore with some lights, and the lookouts reported seeing some unknown lights and where they were, so modern researchers started looking around there and think they may have found it. Might not be in any condition to be raised, though.

Historic trivia fact for the day. This was the first SUCCESSFUL submarine attack. But a sub was used in the Revolutionary war too, it just didn't get anything done.

Great choice of subject, author! Good job! (although, is that flag accurate if it's a confederate boat?)

Kyricom,There were several flags of the Confederate States of America used during its existence from 1861 to 1865. The first official flag of the Confederacy, called the "Stars and Bars," (pictured with artistic liberty) was flown from March 5, 1861, to May 26, 1863. The second national flag ("the Stainless Banner"

The nickname "stainless" referred to the pure white field. The flag act of 1864 did not state what the white symbolized and advocates offered various interpretations.

You are correct about the signal light, and some reports were that the lookouts did see the blue signal light. The submarine was never heard from again. It was indeed discovered a few years ago. Check this out all you history buffs:

Cool. Thanks for the info on the flags. We're all familiar with the "Stars and Bars," but it's nice to get educated about the others. Good luck