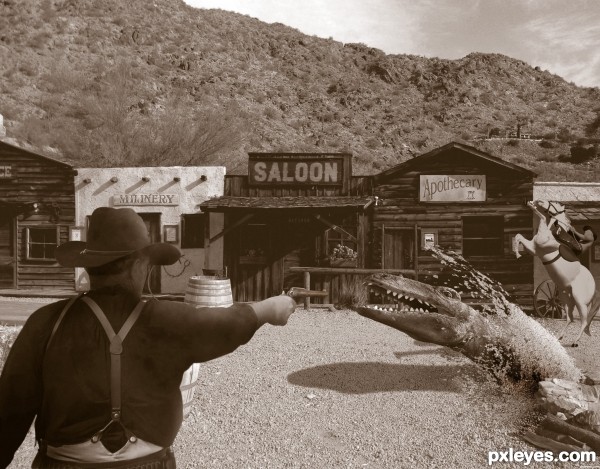 Tremors is actually two movies in one. On its own terms, it's an enjoyable modern sci-fi horror-thriller, with good pacing and a sense of humor; but it's also a loving tribute to such 1950s low-budget desert-based sci-fi-horror films like Them!, It Came From Outer Space, Tarantula, and The Monolith Monsters. Kevin Bacon and Fred Ward are the stars, a pair of small-town handymen living in a small desert community, who stumble upon several difficult-to-explain phenomena, including a couple of people who've died under extremely strange (and, in one instance, very grisly) circumstances. Eventually, they and a handful of their neighbors find the cause: gigantic prehistoric worm-like creatures that streak under the desert the way fish swim through oceans, reaching up and grabbing anything they need for food.
Tremors 4 is the prequel that explains the origin of the story back in the old west.
http://www.imdb.com/title/tt0334541/ (5 years and 2228 days ago)

nice work on the shooting man

@ Eladine: There is no white outline around the monster's head, sorry. Thank you for pointing out the dark line around the horse head...I blurred it. I hope you're happy now.

This is not about me being happy, I was trying to help you improve your image. No need for the attitude author. I have very good eyes. please check the crocodiles nose/mouth. If you dont see it still, Then I can send you a pm with screenshot to show you

nice work. (I may have misread the attitude in your reply but nothing bad is intended or received. ) Thnx for adding the stroy line abotu the movie I havent seen it I might go see it some time thnx to your work :P

Please excuse my little flaws. They are now fixed.

Looks much better. Small adjustments can have a large effect. Great entry, good tribute to a wonderfully "cheesy" movie series!

I watched Tremors 3 and 4 a couple of months ago. They're on Netflix. I loved them! But then, I love cheesey horror flix. And Tremors 4 had the best ending ever!

As for the image, I like it. I'm not so sure that I like the image of the gunman. But I know that it is difficult to find the best sources. He seems like he is painted in or something. But that's cool. You did a good job. GL author.