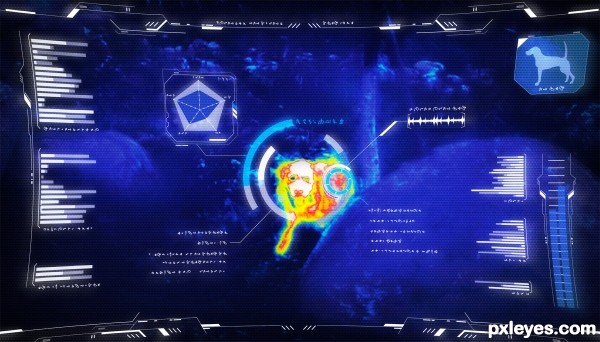 This was a Thermal Vision of an alien helmet that found on my garden. It's kinda cool to have such a vision of planet afar. Though I'm not sure about the written words towards my doggie...

Working with Adobe Illustrator for the UI (User Interfaces) design, composting with Photoshop for the Thermal Vision Effects, because I run out of time, I've to finish this into Photoshop with DISTORT > SPHERE > 50%

Then a little help from Liquify it to make the helmet distortion looks & feel. Thanks for viewing my imperfect yet in hurry SBS. I've got to go for work now. Good luck to everyone!

(!) Check the SBS before commenting.

wow, this is amazing!
that techno UI, I feel like playing an alien dog hunter game on console game... =D

could you do a complete SBS how to make that original photo become "thermal vision" like that?

It's a great job. Looks like some video games that my brother play. crysis or halo or whatever the name is.

Thanks, pearlie. It's kind of a rush hours work in one night to me.

I got the inspiration from the Crysis 2 the game & Assassin Creed Brotherhood.

Yeah, it's like a techno UI just as HexaNode said then combined with the thermal vision looks alike the alien helmet or perhaps the predator's visions with it's hunter vision.

Anyway, thanks for your comment. Just participating though, I thought its more like a Robotic Version of Neo Lizard.

Aw crap... it seems my design won't through the public's eyes... it's especially for those who know the great design of User Interfaces & Game Art Development.

Anyway, thanks for comments & supports, everyone.