Catch a hope - created by siderismaris 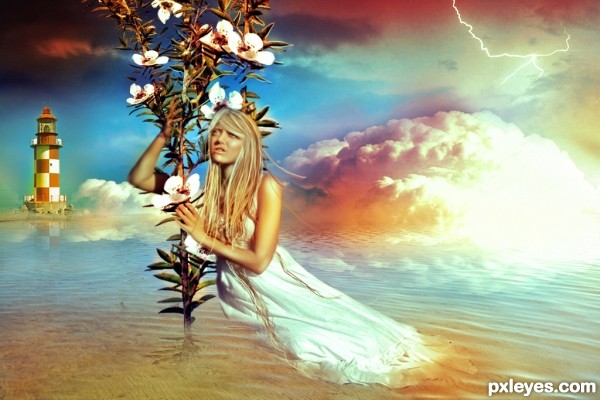 The reflecftions in this entry need a LOT of work.

The water is choppy, yet the reflections in the background are smooth, and the woman and plant have no reflections at all...

The light house is supposedly some distance from the vampire woman with no reflection, yet the reflection from it extends forwards all the way to the woman and her free-floating (yet unreflective) plant, which she is leaning on far too hard, considering it is not secure in the ground. She'll be falling over at any moment.

Maybe that's where the hope comes into play, she's hoping to get some support from that plant. :P

well, 1st of all there's no vampire woman in there, however, the lighthouse and the plant have just a little reflection, cause I didn't want them to be so realistic. On the other hand the lower part of the woman's dress it is supposed to melt in the water, as there is a a hot athmoshpere shown as well by the red and yellow hues around the clouds. Thanks all the way for the tips and I'll try to work harder on the reflections.

Your explanation helps, but it also points out how ineffective the image is in conveying your concept...

"...the lighthouse and the plant have just a little reflection, cause I didn't want them to be so realistic." - It's very difficult to have portions of a photographic image not look realistic, while other portions in the foreground and background do...Consistency is important.

"...the lower part of the woman's dress it is supposed to melt in the water" - this would have her dress either "dissolving," by increasing the translucence until it totally fades away, or "melting," by distorting the shape that is in the water.

"there is a a hot athmoshpere shown as well by the red and yellow hues around the clouds" - If that is so, the "glow would thoroughly permeate the clouds. Just a small spot of "heat" such as you have illustrated, does not give the atmosphere a sense of heat, so much as it looks like a bright light shining from within the cloud. Again, consistency is important, and "hot atmosphere" on top of cool water, and beneath cool sky does convey an unrealistic scene, but again, it is in contrast with too many other visual elements that oppose it.

suggestions:
1) move the horizon further (rules of the third) to the top one-third
2) smaller clouds n light house
3) bring the girl and plant closer to the scene (bigger)

Thanks, aheman! I'll try as soon as possible!

After all is said and done ... lovely concept!