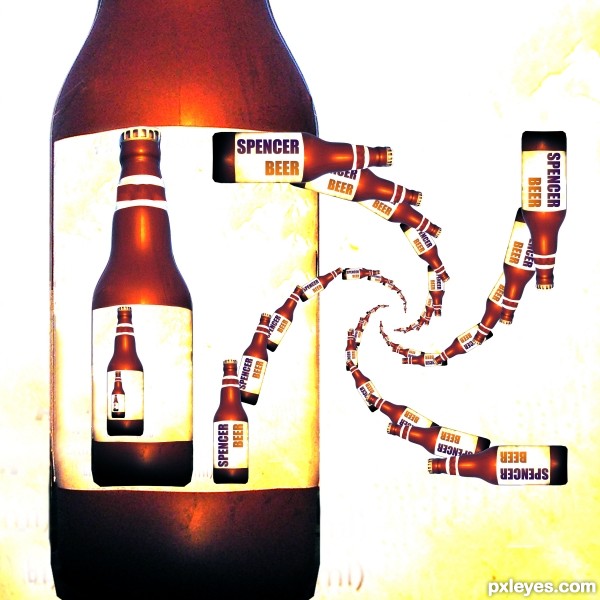 Nice pattern, but it's not really a Droste Effect.
A drost effect is when you have an image of an image with itself which then repeats, not just taking an image and repeating it.

You are incorrect MossyB, it's a perfect droste, each bottle turns into a smaller one, follow any beer and it will get smaller and smaller, I just happened to use Four Droste paths, I could have just done one path, but I decided to do four so it wouldn't look like a fractal

(It helps if you look at the sbs, you'll see the droste pattern easier there)

No, you have merely repeated the bottle. Look at the Droste Cocoa image in the Wikipedia link, and you will see how it is a Droste image, because the entire image is within the image, not just the woman repeated and getting smaller.

I am not incorrect in this situation, YOU are, and the original Droste Cocoa image shows you why...

I am not a photoshop person so I don't know who is right or wrong here. But IMO this is VERY COOL!

No MossyB, You are incorrect (and getting your info from Wiki? This makes you even more incorrect. (I know reading a book is hard, all those words, but I think it would benefit you)

Recursive was first, then came Droste, and that's in Art History books. (I did retain a lot of knowledge from college, and one of our biggest debates was on Droste) Droste is actually used as an example of Recursion.

A picture of a Single Beer Bottle repeated upon it's self in a smaller version and continued in a pattern is Droste. A picture with in a Picture slowly sinking into infinity is Droste.

MossyB, it is quite clear that you used to be a member here under some other name (we aren't stupid dear, it's more clear then the fate of a lab rat being placed in a vat with a starving python.). If you posted all your previous images from old contests and proved your knowledge (your portfolio isn't enough to make an accurate judgement, just not enough there) your comments on an entry like this would be much more acknowledged.

I HATE DOING THIS, but when you are wrong, you are wrong and I know it's hard but you should just deal with it. You make a LOT of comments, and I'm sure they are appreciated, but your ability in art should match the candor of your comments, and it doesn't. Terse commentary of self importance doesn't make one an expert, and until you prove otherwise, you will get the backlash of an opposing point of you. (I've been in a hospital, it doesn't make me a brain surgeon)

(Yes I'm a windbag, but it kept me from having to deal with bullies, no matter how big they thought they were).

Droste effect is an impossibility (it can never be achieved in reality only feel like reality..but it can be attempted, as I have done here) Sort of like your need to always be right all the time.. I'm afraid that doesn't exist.

You comment has been taken, your opinion has been vilified accordingly. As is my right, as it is your right to beat a dead horse, (though I am curious why you would want to, it just makes me look vindicated and you just very cranky and bossy). In your opinion, the only thing that can be Droste is a frame inside frame inside frame... (or picture in picture) and that's too little of a place for me and my art to reside in.

Droste created a wonderful Idea of art, I'm sure he'd approve of people using modern technology to play and improve on that idea. It's one of the great things about Art, we all have our own Idea, and this was mine, and I will defend it until death. Or until a Mod comes along and removes it. In that case.. I'm sorry for the Mod, I was raised to defend myself, and I do. Makes Mommy Proud.

Once again, I COMBINED 4 Droste patterns on top of themselves, but because I used the optical illusion in such tiny increments it looks just repeated, but it's not. (and the mathematics I had to use to achieve this effect was a nightmare.. the size difference of each recurrent bottle is less then 10 percent, no easy task mind you, and making them progress in size took a lot of leg work) Shrinking the bottle 50 percent would have been much simpler and obvious, but I like to challenge myself, I'm always learning.

@rbsgrl, you are so sweet, I could squeeze you til you squeak

Beers and Broads, I love these contests! Well done and GL Author!

hey u changed it