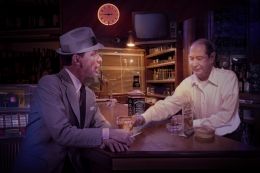 Winning entry, with a score of:
58.9%
By magicalfruittuts

Following this title here's a series of contests:
1. THE GOOD
Depict something which means 'GOOD' to you.
Religious and political subjects are excluded!

All participants will be shown after the contest ends!
Votemedals: Alan2641CMYK46

One for My Baby - created by magicalfruittuts

Home » Photoshop Contests » Good, Bad And Ugly 1 » One for My Baby 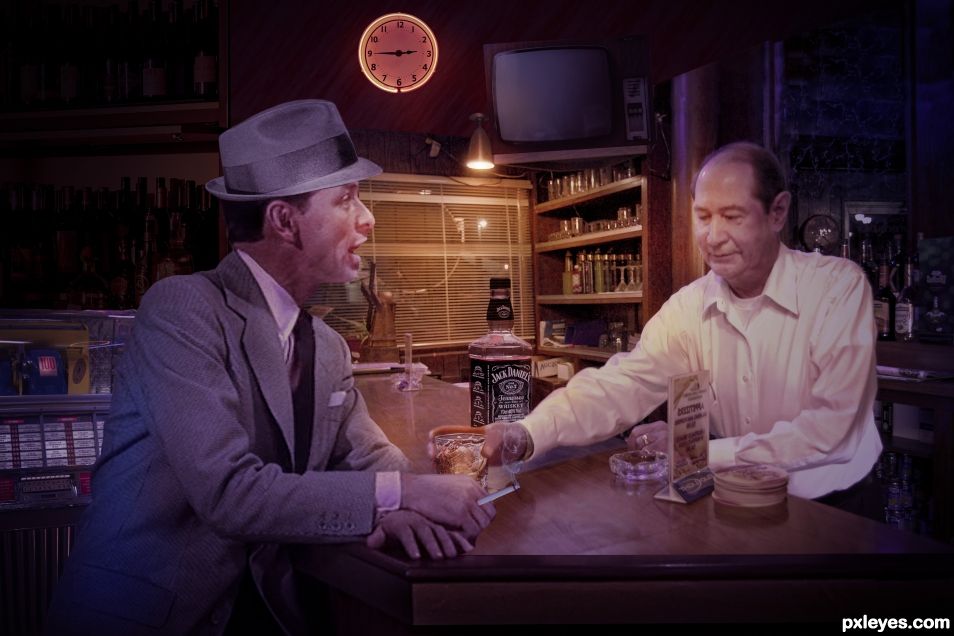 To my mind, one thing that is good is a great Sinatra song.
This song "One for my Baby" conjours up an image of sad man who lost his love. He's sitting in a bar telling his story to a sympathetic bartender. It's late and everyone is gone except him and the bartender. He has no place to go as his girlfriend left him. He wants to hear another sad song on the jukebox to help him drown his sorrows.

Fred Astaire originally sang the song among others, but Frank sang and recorded it many times and essentially made it his own. I believe deep in his soul he felt the sadness of a lost love and expressed it through this song.

In this image I chose the Jack Daniels drink as that was Sinatra's favorite.

It's quarter to three, there's no one in the place except you and me
So, set 'em up, Joe, I got a little story you oughta know
We're drinkin', my friend, to the end of a brief episode
Make it one for my baby and one more for the road

I got the routine, so drop another nickel in the machine
I'm feelin' so bad, wish you'd make the music pretty and sad
I could tell you a lot, but you've got to be true to your code
Just make it one for my baby and one more for the road

You'd never know it but buddy, I'm a kind of poet
And I got a lot of things I'd like to say
And when I'm gloomy, you simply gotta listen to me
Till it's talked away.... (1 year and 72 days ago)

Thank you Z. Hope to see some entries from you. You have much talent.

Thanks, I'll be back in a few days. Hope others will be too