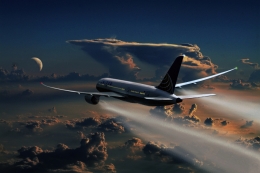 Winning entry, with a score of:
72.3%
By lchappell

We recently had a contest using a photo of a ground vehicle model. Let's do the same thing with aircraft or spacecraft. You can use a photo of your own model or find an acceptable source image. Make your model look as realistic as you can. Remember we're talking about scale models like the plastic kits you build, not full size replicas.


Status: finished. Check out the winners below!
Suggested by: spaceranger

Contrails at Dusk - created by lchappell 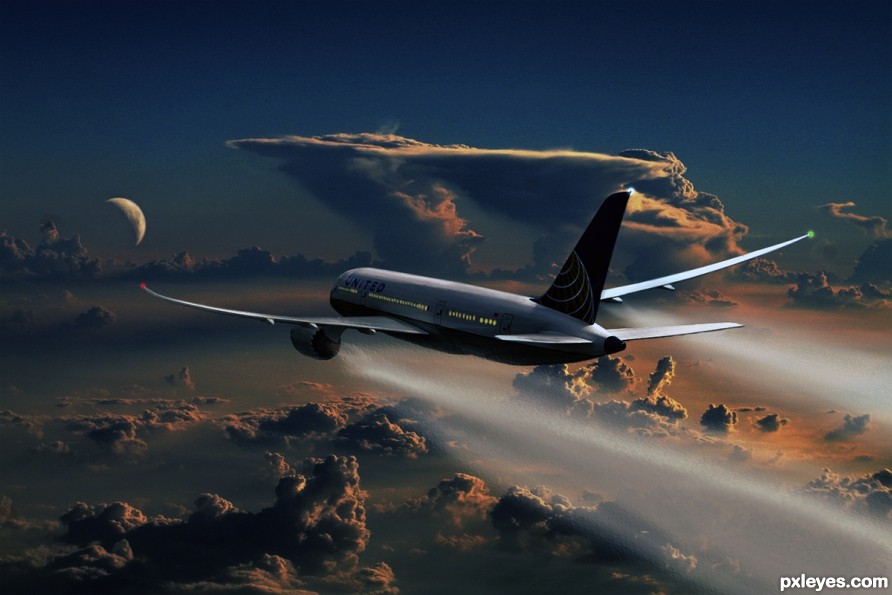 Lovely entry. The integration and colors are well done.A lovely addition is the lights on the wing tips.

Excellent work, for me your best!! Great colors and drama!!

This is a Great image don't get me wrong, But this contest is not about that. To me it looks like a 60s airline magazine ad. looks painted and not realistic. Also the contrails don't come out the engine they tend to form a ways back from them as the engines exhaust cools. It is still a beautiful image.

IRONCOW I donâ€™t know whether to slap ya or shake your hand.

Thank you for the compliment about this being a â€œGreatâ€ image and looking like a painting. I wish I could paint well enough to get some work as an ad designerâ€¦lol. As for as it looking like 60â€™s airliner ad, wow thanks but the Boeing 787 did not take flight until December 2009. In the 1960â€™s an aircraft this size would have had 4 engines.
You are partially right about the contrails, MOST OF THE TIME; the E.G.T. (exhaust gas temp.) will prevent the ice from forming immediately. Believe me though, I have seen times above 40,000 ft (12200 m) the outside air temperature being near -70F (-56c) and the air pressure below 5 inches Hg with an engine not running at peak efficiency or a low E.G.T.. Ice will start forming before the trailing edge of the flap track fairings especially during high humidity conditions. Please just chalk my painterly contrails and unrealistic picture up to â€œartistic libertyâ€ if you will. Thanks again.

Congrats! Told ya it was a good 'un!

Vought F4U Corsair Across The Fantail - created by lchappell 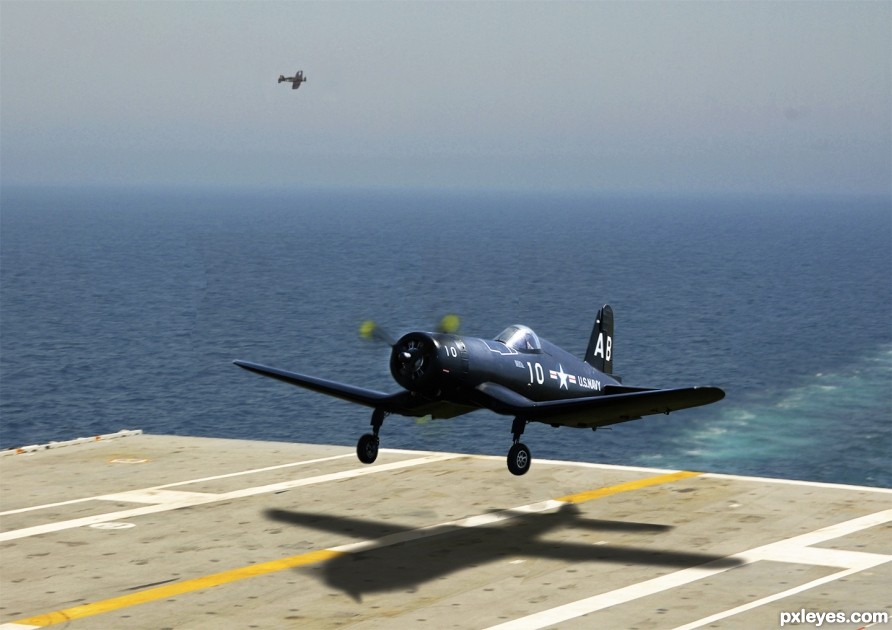 I have attempted to load the source link for the Carrier Deck several times but for some reason it does not work. Here is the link in it's entirety:


This is such a long URL I believe there is simply not enough room in the add source line. (5 years and 864 days ago)

CMYK46 now you're talking, Pappy was my hero back in the day when Baa Baa Black Sheep was on the TV (when television was television...lol)

Kyricom yep those F4U Corsairs were cool airplanes alright, one of my WWII era fav's; them and the P-47 Thunderbolt ( The Jug)

Yeah... almost obligated to like the Mustangs just because they were so badass.... but I was always a little partial to the P-38s

Ahh... der Gabelschwanz-Teufel (Forked Tailed Devil) those were definitely badass too.Kelly Johnson was definitely ahead of his time when him and Hall Hibbard conceived the idea. The Lightning opened a new line of aeronautical engineering study, thats when High-speed compressibility problems became a factor. 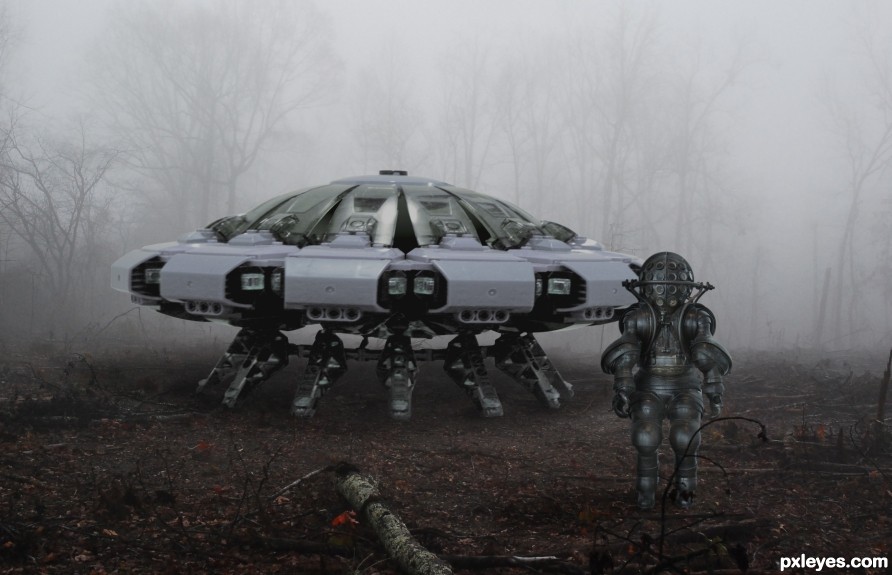 Your choice of the misty background is perfect for this scene.

Thanks, Gadion! I almost didn't make this image until I found the background and said YES! 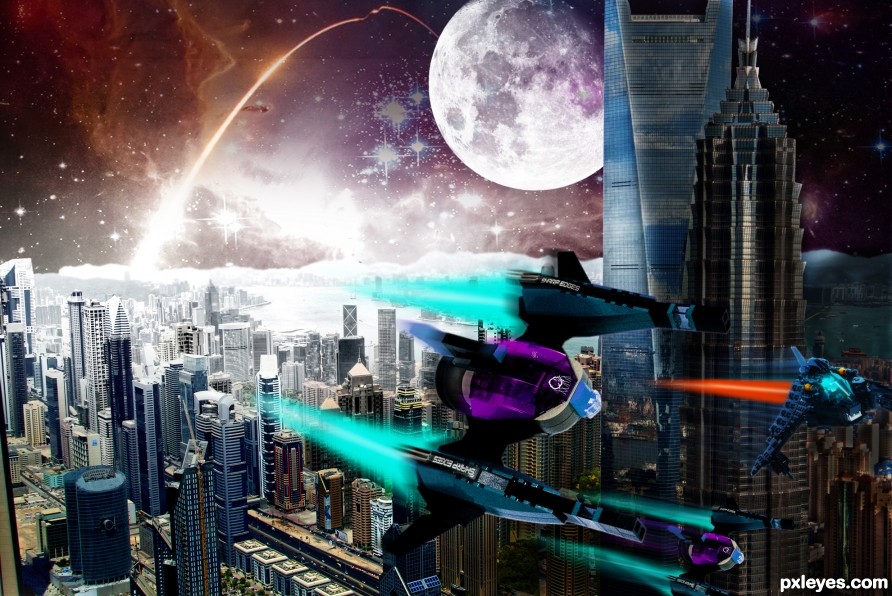 You might want to fix or remove the reversed lettering on the ships.

I can not change the image.-two hour delay was 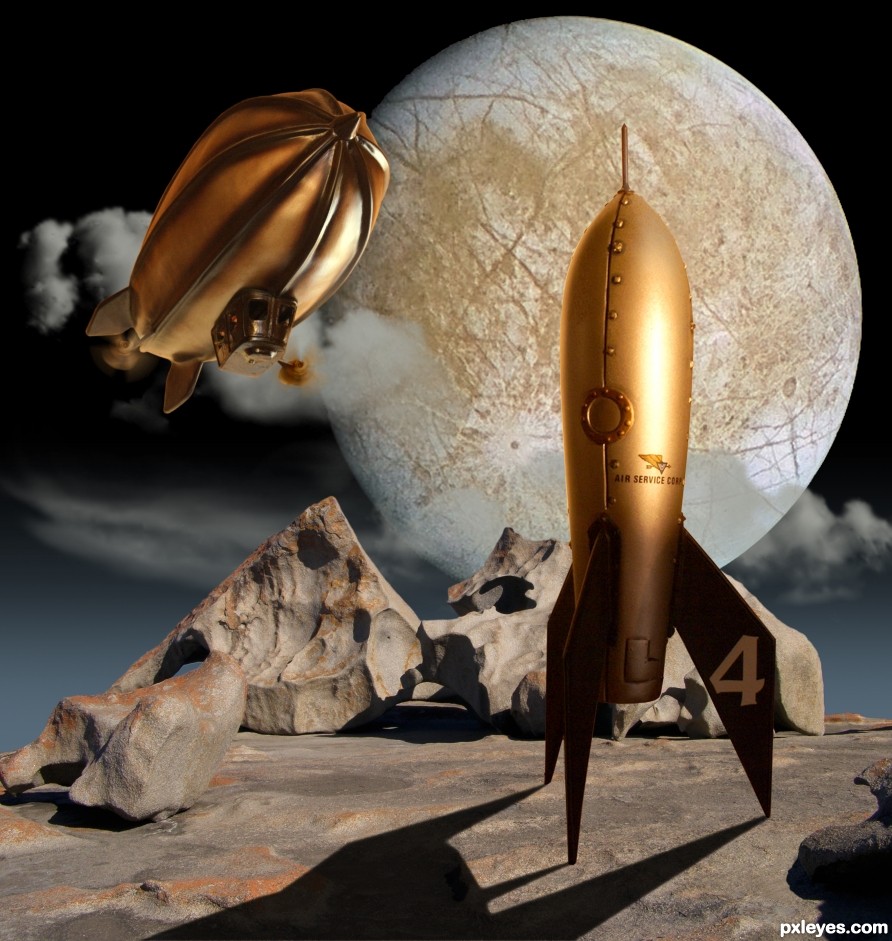 Somewhere in the far reaches of an alternate universe. (5 years and 869 days ago)

Image is good but the shadows need some work. They are all wrong !

The angle of the rocket shadow is based on the shadow of the rock at left. Dunno what exatly you mean by "shadows" since I've only created one shadow, that of the rocket. As for "color" all shadows look the same to me. Since the light on the rocket, the zeppelin & the rock source pics are all slightly different, I had to mentally average them for the light on the total image. This isn't so easy to do.

I would have to type so much to say all that is wrong Im sorry. The rocket and the zeppelin seem to have light from different sources and almost no shadows? the rocks to the back left have light from the top casting almost no shadow, yet the rocket ship has a massive long shadow? the rock to the bottom right is casting in between ? and the moon in the back has light coming from behind the camera so making every shadow in the image wrong ? They are all wrong !

Obviously we differ on the shadows & light sources. The rock is short, hence it has a smaller shadow. The rocket is tall, and would obviously have a much longer shadow. I don't want to get into a pissing contest over this, okay?

Nice work, conjures up Buck Rogers for me!

I think you did a good job. The shadows look fine for me, the image overall looks real nice. GL....!