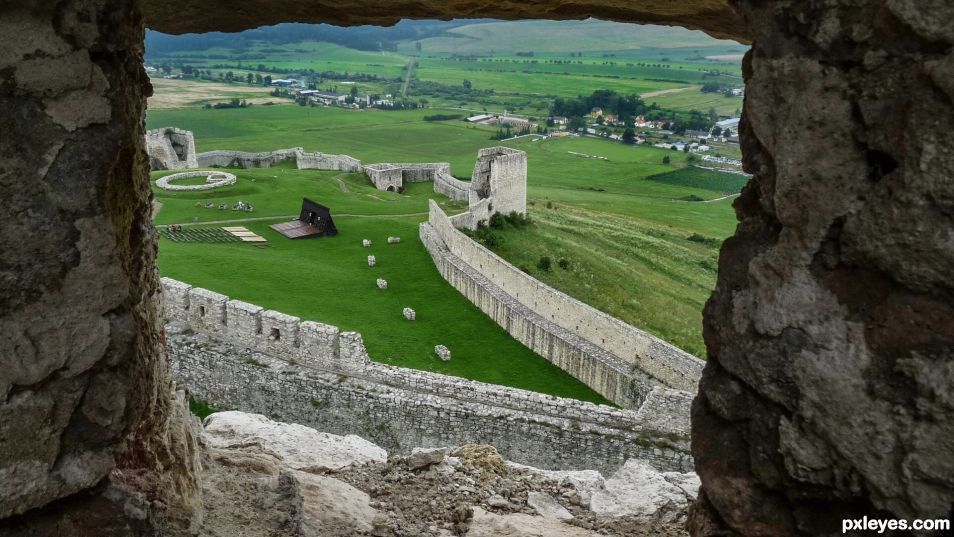 Spiš Castle, Slovakia.
Spiš Castle was built in the 12th century on the site of an earlier castle. It was the political, administrative, economic and cultural centre of Szepes County, of the Kingdom of Hungary. Before 1464, it was owned by the kings of Hungary, afterwards (until 1528) by the Zápolya family, the Thurzó family (1531–1635), the Csáky family (1638–1945), аnd (since 1945) by the state of Czechoslovakia then Slovakia. It was included in the UNESCO list of World Heritage Sites in 1993 (together with the adjacent locations of Spišská Kapitula, Spišské Podhradie and Žehra). This is one of the biggest European castles by area (41 426 m²). (5 years and 133 days ago)

I really appreciate the description you have given to further flush out the story, so thank you very much. A nicely framed image, framed by the same rocks / bricks that one can see beyond and this gives a wonderful homogenous feel to your upload. Technically your dof is perfect rendering sharpness throughout the planes of the photograph. The lead lines further pull us into the shot and your colour palette is natural. You have shown this well enough to make me want to go there. Thank you again for educating me further.