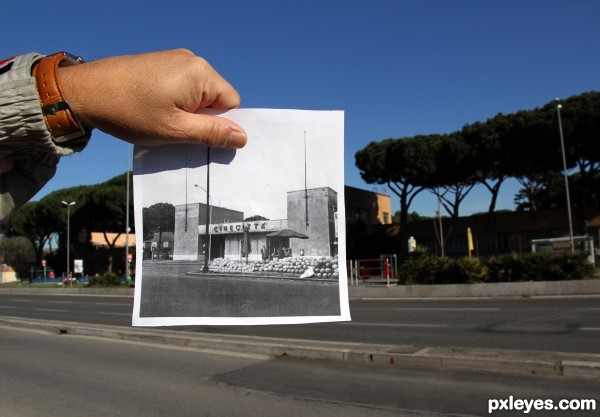 CinecittÃ  (Italian for Cinema City) is a large film studio in Rome that is considered the hub of Italian cinema.
The studios were founded in 1937 by Benito Mussolini, his son Vittorio, and his head of cinema Luigi Freddi for propaganda purposes, under the slogan "Il cinema Ã¨ l'arma piÃ¹ forte" (Cinema is the most powerful weapon). Post-production units and sets were constructed and heavily used initially. The studios were consequently bombed by the Western Allies during World War II. Following the war, between 1945 and 1947, the studios of CinecittÃ  were used as a displaced persons' camp. Through the immediate post war years, the studios were used once again for their post production facilities as rebuilding had taken form. In the 1950s, CinecittÃ  was the filming location for several large American film productions like Ben-Hur, and then became the studio most closely associated with Federico Fellini.

After a period of near-bankruptcy in the 1980s, CinecittÃ  was privatized by the Italian government.

Pink Floyd performed, on three consecutive nights, at the studio during The Division Bell Tour on September 19â€“21, 1994.

On August 9, 2007, a fire destroyed about 3000 mÂ² (32,000 sq. ft.) of the CinecittÃ  lot and surroundings. The historic part that houses the sets of classics such as Ben-Hur were not damaged, however a good portion of the original sets from the HBO/BBC series Rome were destroyed.

Very interesting info that you added for us, thank you. Good luck with your entry