Christmas Dinner on the beach - created by friiskiwi 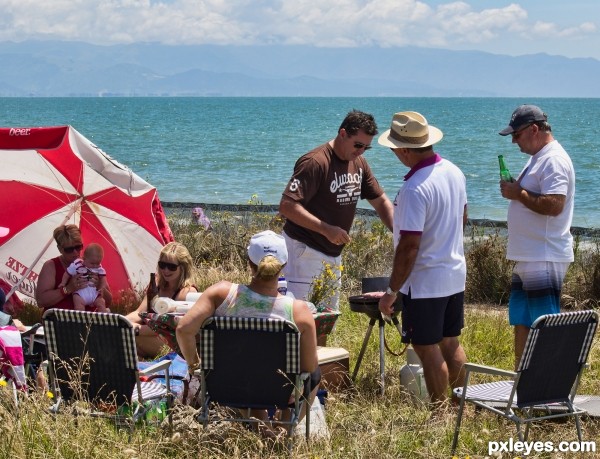 must be me but somehow this doesnt have a christmas feeling at all.. looks more like a barbeque in the summer hollidays lol

nice picture though im sure you guys had a great time

To many people in the Souther Hemisphere, it would not be Christmas without a BBQ on the beach.

Just what is "Boxing Day?" I've heard of it, but can't seem to get a good explanation from anyone. It's the day after Christmas, right? One of my Canadian friends said something about evolving from giving gifts to servants hundreds of years ago? Just curious. Wish I could get invited to a BBQ on the beach about now.

Boxing Day, December 26th, I believe your Canadian friend is right.
Boxing Day is traditionally a day following Christmas when wealthy people in the United Kingdom would give a box containing a gift to their servants. Today, Boxing Day is better known as a bank or public holiday that occurs on December 26, or the first or second weekday after Christmas Day, depending on national or regional laws. It is observed in the United Kingdom, Australia, Canada, New Zealand, and some other Commonwealth nations.
http://en.wikipedia.org/wiki/Boxing_Day

Great... thanks for the info

we actualy still have some sort of a thing going here. Usualy at the last day at work before christmas employees of many bussiness here in holland receive a christmas box fileld with luxury stuff, bonbons, whine, pack of lobstersoup, etc etc that kind of stuff. sometimes theres a meat coupon included since thats neccesary to get fresh. Sometimes those boxes are not just your ordinary normal day kind of cardboard box (all be withit with xmas decorations) sometimes they pack these items into a more giftlike packaging, a large flowerpot, or a giant basket, etc etc. i guess u get the idea.